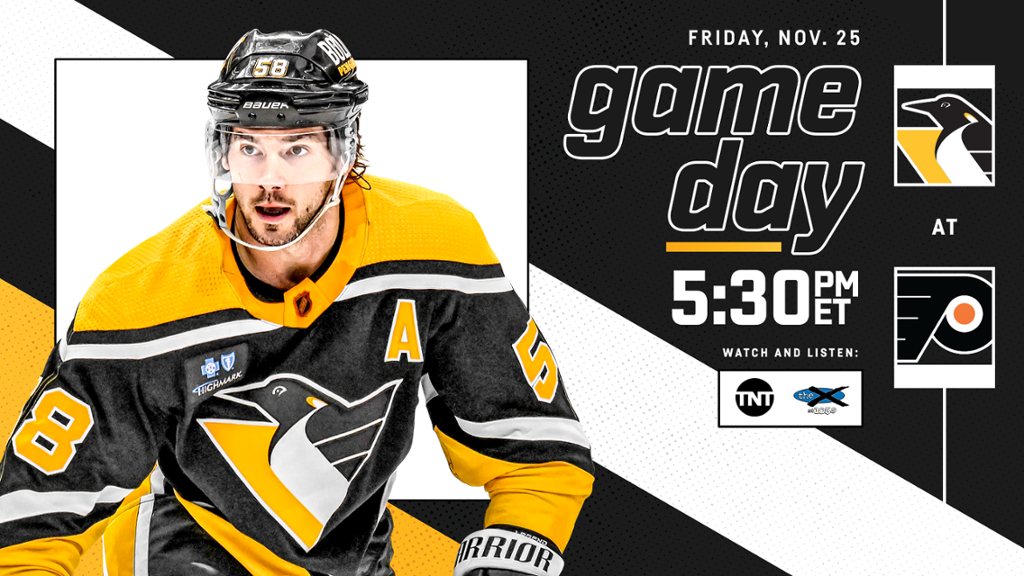 The Penguins hit the road to take on the Philadelphia Flyers for their first matchup of the season and the only one at Wells Fargo Center. The Penguins face the Flyers three times this season but after tonight they won’t face them again until March 11th at home. Last season the Penguins went 3-1-0 against the Flyers. Kris Letang led the team in points with six points (2G-4A) in four games played. Both of his goals were game-winning goals. The Penguins are 6-3-1 in their last 10 games played against the Flyers and in those games, they are 37% (10/27) on the power play.

Pittsburgh has points in seven of its last eight games overall (6-1-1). Since this eight-game stretch began on Nov. 9, only the St. Louis Blues (14) have picked up more points than Pittsburgh (13).

Per NHL PR, Sidney Crosby and Evgeni Malkin earned their 500th win together as teammates Wednesday night. While they are first set of Penguins teammates to combine for the feat, four other active teammates have also reached the mark: Alex Ovechkin-Nicklas Backstrom (603), Jonathan Toews-Patrick Kane (529), Anze Kopitar-Drew Doughty (508) and Ovechkin-John Carlson (505).

Since entering the league in 2006-07, no defenseman has more points against the Flyers than Kris Letang (47). He has points in six of his last seven games (2G-7A) against Philadelphia. His plus-30 versus the Flyers is third best in NHL history behind only Bobby Orr (+37) and Jaromir Jagr (+31).

Jason Zucker has scored in seven of his 17 career games (7G) versus the Flyers.

Pittsburgh’s penalty killing unit was perfect for the fifth-straight game, going 3-for-3 on Wednesday against Calgary, and has now killed off 17 of its last 18 penalties over the last six games. Below is a look at Pittsburgh’s penalty kill by month, which has made significant improvement since October. Since Teddy Blueger returned to the lineup from injury, the Penguins have not allowed an opposing power-play goal.