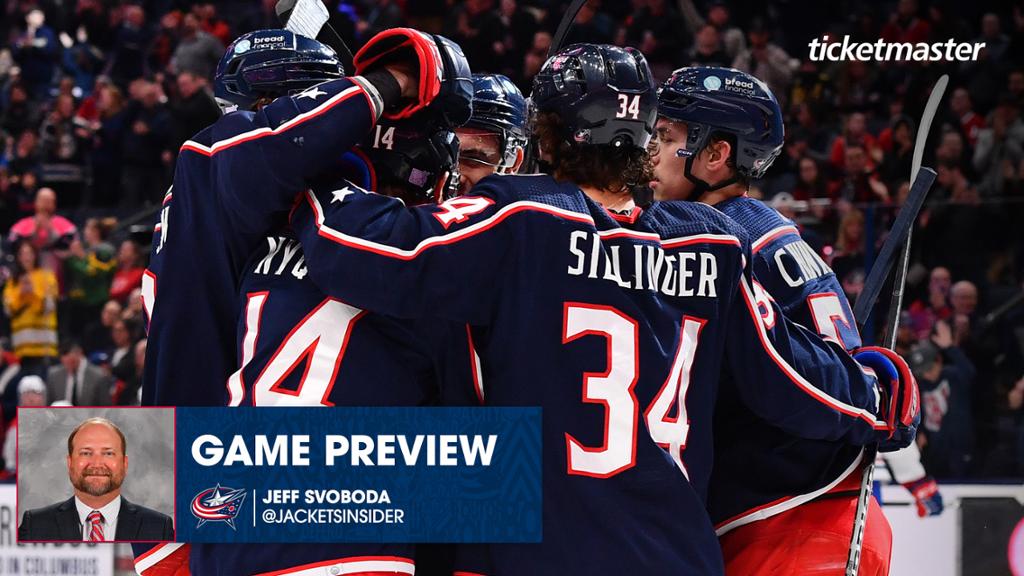 Hockey can be a funny game.

The Blue Jackets were on the wrong end of a 96-38 disparity of shot attempts Sunday night against Florida but put five of those looks in the net, earning an opportunistic 5-3 victory against one of the NHL’s most dangerous offenses.

In the next game, Columbus was much stauncher defensively against Montreal on Wednesday night, yet the visiting Canadiens scored two goals on deflections and added an empty-netter to take a 3-1 victory over the Jackets.

Sometimes, you just can’t figure out this sport.

“First one off a stick, second one off a skate,” head coach Brad Larsen said of the game-tying and -winning goals within 57 seconds of one another for the Canadiens. “It’s too bad because we were playing a heck of a game. We weren’t giving up much at all. We had some good looks ourselves. Their goalie made some big saves for them.”

How good were the Blue Jackets defensively? Per Natural Stat Trick, Columbus gave up a total of three high-danger chances at 5-on-5 in the game, a season low. Yet it didn’t matter in the end, as Arber Xhekaj’s deflected goal and a centering pass that went off former CBJ defenseman David Savard and into the net proved to be the difference.

It was disappointing to be sure, but the goal now for the Blue Jackets will be to take that defensive performance and build on it in coming games.

“We limited them to minimal chances,” defenseman Andrew Peeke said. “They got a couple (on an) outside shot and off a skate. Sure, those go in. It’s the game of hockey, but defensively we played well. It’s unfortunate we lose.”

The narrative: Barry Trotz is no longer in charge on Long Island, but the same defensive ethos remains with the Islanders. Before missing the playoffs last season in the first year in UBS Arena, New York had won a playoff series in three straight years, and this is a veteran group that has played a lot of hockey together.

2022-23 leaders: After notching zero goals and 19 assists in the first 18 games, Mathew Barzal finally got on the board with two goals Nov. 19 vs. Dallas, and his 2-21-23 line on the season leads the Islanders and puts him second in the league in assists. Brock Nelson is working at a point-per-game pace with a 9-11-20 line, while captain Anders Lee has eight goals and 10 assists. Noah Dobson leads the blue line with a 6-8-14 line.

Ilya Sorokin has been the top goalie, starting 14 games thus far and playing in 15 with a 9-5-0 record, 2.20 GAA and .934 save percentage. Per MoneyPuck.com, he’s third in the NHL in goals saved above average per 60 minutes.

What’s new: General manager Lou Lamoriello opted to stay the course after last year’s disappointing campaign, bringing in Alexander Romanov on the blue line to replace the retired Zdeno Chara but leaving pretty much everything else alone.

Trending: The Blue Jackets have struggled to get traction against the Isles in recent years, going 3-7-2 in the last 12 contests since the 2018-19 season. New York won the previous matchup this year by a 4-3 score in overtime Nov. 12.

3 Keys to the Game

Keep an eye on Nelson: The Islanders forward had two goals in the first matchup of the year between the teams, not to mention 10 shots on goal. He’s a key to the New York attack.

Defensive structure: Are the Blue Jackets finding some defensive chemistry after all the injuries on the blue line? Columbus hopes to build on Wednesday night’s showing.

Stick with it: The Islanders wear you down as a grinding, veteran team. And they’re never out of it, as shown by the fact the team rallied from three deficits to get the win two weeks ago vs. Columbus.

All seven of Johnny Gaudreau‘s goals this season have not only come in Nationwide Arena, they’ve come in the net at the east side of the ice.

Columbus has won six straight Black Friday games and is 7-3-1 all-time on the Friday after Thanksgiving in Nationwide Arena.

Sean Kuraly has four goals in the past five games while Mathieu Olivier has notched goals in two of the last four. … Gaudreau has a 2-8-10 line in the last nine games. … Boone Jenner has a 7-2-9 line in the last seven home games. … Goaltender Daniil Tarasov‘s 47 saves in Sunday’s win tied him for the sixth most saves in CBJ history. … Kent Johnson is tied for third among NHL rookies with four goals this season. … Trey Fix-Wolansky and Carson Meyer, recalled this week, sit tied for second and 10th, respectively, this season in scoring in the AHL. … Twenty different Blue Jackets have scored goals on the season, tied for the second most in the NHL with Boston. Sixteen of those players have multiple goals. … With the CBJ’s two overtime winners, Vladislav Gavrikov is just the fourth Blue Jackets defenseman to have multiple overtime goals in a season. … With 11 goals by defensemen, the Jackets are tied for sixth in the NHL.

This Day in CBJ History

Nov. 25, 2013: Columbus coasts to a 6-0 win at Toronto that features two goals and three points from Ryan Johansen as well as 18 saves from Sergei Bobrovsky in his first shutout of the season.

Nov. 25, 2016: Columbus posts a 5-3 win at Tampa Bay, kicking off an 18-game point streak (17-0-1) that would eventually include a 16-game win streak that stretched into 2017. Alexander Wennberg, Cam Atkinson and Brandon Saad all posted a goal and an assist in the victory.

Roster Report: The Blue Jackets recalled Meyer and sent down Emil Bemstrom on Thursday, and Meyer could enter the lineup if Chinakhov is not ready to return. The team will have a 10:30 a.m. morning skate ahead of the contest and Larsen will discuss the lineup afterward.