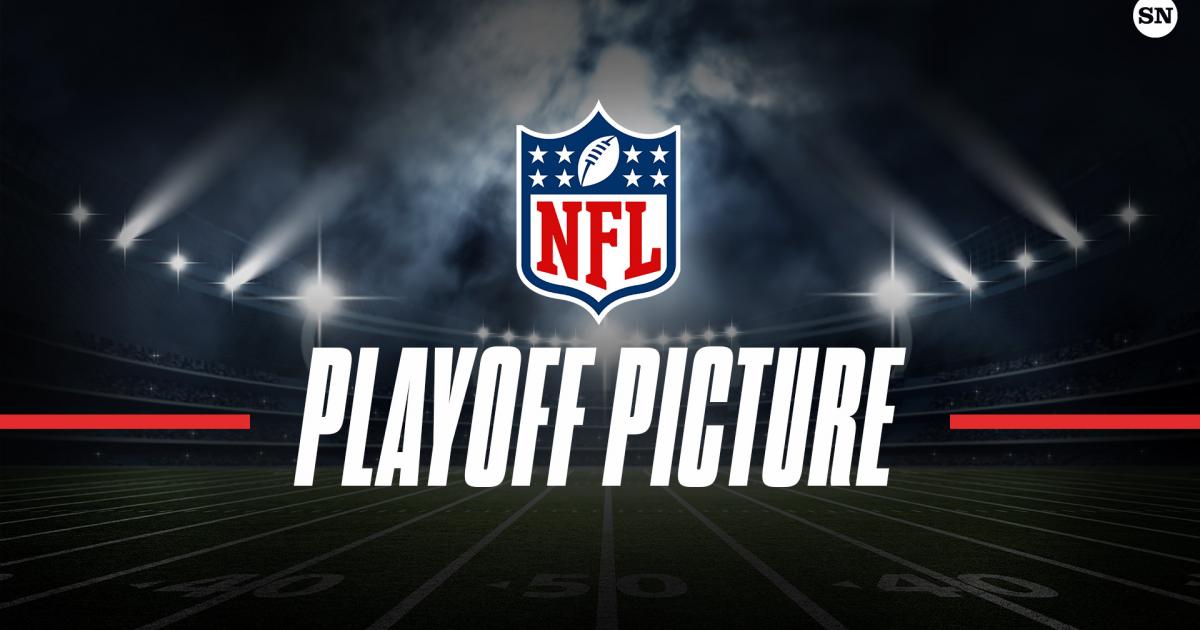 The 2022 NFL season is down to the final five weeks. Although the playoff picture for the AFC and NFC won’t be finalized until Week 18, it’s time to keep looking at the updated standings and what teams would be in the playoffs if the season ended in Week 13.

Here’s a breakdown of the NFL’s latest playoff field and seedings, also looking at the contenders on the brink of joining the potential postseason party:

1. Kansas City Chiefs (9-2), first place, AFC West. The Chiefs are in cruise control in the division again, up three games and the head-to-head tiebreaker on the Chargers. They are just focused on staying ahead of a crowded field for home-field advantage and the lone bye in the playoffs. If they beat the Bengals in Cincinnati, they should be in great shape for that.

2. Buffalo Bills (9-3), first place, AFC East. The Bills beat the Patriots on the road to open Week 13 to keep putting pressure on the Dolphins. If Miami loses at San Francisco, Buffalo would stay here going into Week 14. The Dolphins beat the Bills in Week 3 at home to have the head-to-head tiebreaker but the Week 15 matchup in Buffalo is likely to decide the division.

3. Tennessee Titans (7-4), first place, AFC South. The Titans stayed here by losing a tough home game to the Bengals. They will still win the weak AFC South but getting any higher than the No. 3 seed looks like a real challenge now. They got a break with the Ravens losing too, however, because they still have the conference-record tiebreaker over them.

4. Baltimore Ravens (7-4), first place, AFC North. The Ravens had to grind through more slow-starting offense with Lamar Jackson in Jacksonville but it was their defense blowing another late lead that cost them. They stay here behind the Titans but now their division lead over the Bengals is down to a head-to-head tiebreaker from Week 5. They need to rebound at home against the Broncos.

5. Miami Dolphins (8-3), second place, AFC East. The Dolphins know they need to keep winning before facing the Bills in Week 15 and that will be tough in back-to-back road trips to California against the 49ers and Chargers. The Dolphins are still likely looking at the top wild-card spot but they also need to worry about the Bengals or Ravens ending up here. Miami does have the head-to-head tiebreaker over Baltimore but lost to Cincinnati.

6. Cincinnati Bengals (7-4), second place, AFC North. The Bengals kept putting pressure on the first-place Ravens, to whom they lost in Baltimore in Week 5. The road win over the Titans in Week 13 was huge to stay in strong wild-card position right behind the Bills, whom they host in Week 17. They also beat the team behind them, the Jets, on the road in Week 3. Now they have a huge chance to go on a familiar late-season run vs. a tough schedule, starting with the Chiefs at home.

7. New York Jets (7-4), third place, AFC East. The Jets got a needed offensive spark from Mike White and Zonovan Knight to wake up their passing and running games against a weak Bears defense in Week 13. They are back in decent playoff position after being swept by the Patriots with Zach Wilson starting at QB. But they have a tough back-to-back on the road next against the Vikings and Bills.

Who’s in the hunt?

The Patriots have dropped two consecutive key games to the Vikings and Bills, so they will hope the Chargers do the same. The Chargers need to beat the pesky Raiders on Sunday before drawing a tougher matchup vs. the Dolphins in Week 14.

The Colts are all but done with the Titans taking their division again. Of the four 4-7 teams, the Browns and Steelers have the best chances to make late surge. The Texans are headed to the No. 1 overall pick.

1. Philadelphia Eagles (10-1), first place, NFC East. The Eagles have a tough home matchup with the Titans on Sunday. If they win and the Commanders, 49ers, Seahawks all suffer defeats in Week 13, the Eagles would clinch a playoff berth. The division is a different story given the Cowboys are only two games behind. The Eagles won the first meeting but the rematch in Dallas in Week 16.

2. Minnesota Vikings (9-2), first place, NFC North. The Vikings are down a game and a head-to-head tiebreaker to the Eagles in the chase for the No. 1 seed, playoff home-field advantage and the lone bye. But they can clinch their division title ahead of the Eagles as the North is much weaker. Minnesota can do that by beating the Jets at home while Detroit falls to Jacksonville at home.

3. San Francisco 49ers (7-4), first place, NFC West. The 49ers have complete control of this division despite being only game ahead of the Seahawks because they beat that team at home in Week 2. They are red-hot offensively with balance, diversity and explosiveness and kept rolling defensively against the Saints at home in Week 12. They will need to score a little more to turn back the Mike McDaniel-led Dolphins at home on Sunday.

4. Tampa Bay Buccaneers (5-6), first place, NFC South. The Buccaneers gave up a late lead and lost to the Browns on the road in Week 12 to fall back a game below .500. They are up only a half-game and head-to-head tiebreaker over the Falcons and two games ahead of the Panthers and Saints. Tampa Bay lost at Carolina but won at New Orleans. The Bucs will attempt to sweep the Saints at home on Monday night to even their record again.

5. Dallas Cowboys (8-3), second place, NFC East. The Cowboys have taken care of the Giants with a season sweep and also beat the Commanders at home. They can focus on chasing down the Eagles. They lost at Philadelphia in Week 6 and get the rematch in Dallas in Week 16. The Cowboys are looking good for at least this seed with an easy matchup at home vs. the Colts.

6. New York Giants (7-4), third place, NFC East. The Giants still have two games left with the Eagles and Commanders to try to build their case in the division and wild-card races, but the two losses to the Cowboys hurt. They are still looking good for a playoff berth, but after losing to the Seahawks, they must beat the Commanders at home on Sunday to help that cause. They also still have a tough road game at the Vikings.

7. Washington Commanders (7-5), last place, NFC East. The Commanders would make it four teams from the same division in the playoffs and just a half-game back, can pass the Giants and get closer to the Cowboys by winning at New York on Sunday. They get a bye between the two Giants games. The win over the Falcons in Week 12 was huge; the Commanders do not play the Seahawks.

Who’s in the hunt?

The Packers, Cardinals and Rams will be three displaced playoff teams from 2021. The Panthers and Saints still are deep longshots to win the South. The Bears may not want to move up too much, given they have a plum draft spot now.