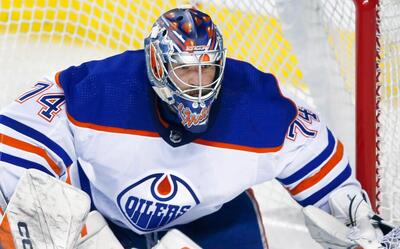 Yesterday’s Winter Classic was everything vintage hockey used to be, including a defensive showdown for the ages. I was fortunate to have the day off yesterday to enjoy it.

This is the first official NHL betting guide of 2023, so let’s kick off the year with some winners.

Note: Lines are subject to change throughout the day after this article is published. All ratings are out of five stars. All NHL betting odds and totals come from FanDuel Sportsbook.

I’ll say it right now — I have a hard time seeing any two other clubs meeting in the Eastern Conference Finals this year.

Carolina is, analytically, the best team in hockey in terms of expected-goals-for rate (57.9% xGF). That’s largely built on their defense, allowing a league-low 2.56 expected goals (xGA) per 60 minutes. New York sits ninth in that category (2.88), so they can nearly match them in terms of keeping shots off the net.

This is also a matchup that contains surprisingly elite goaltending on both sides. Igor Shesterkin, last year’s Vezina Trophy winner, isn’t the surprise, ranking 11th in goals saved above expectation (11.11 GSAx) this year. The stunner is Hurricanes’ rookie Pyotr Kochetkov, who sits one spot above him in 10th (11.27 GSAx) despite just 15 games played.

This low total — unsurprisingly — is seeing most of its action on the over, but our model likes the under to hit 57.8% of the time at these 50.0% implied odds.

The +116 odds here indicate this puppy might be moving to 2.5 this afternoon. I certainly don’t think it’ll move in Chicago’s favor.

The 8-24-4 Blackhawks are dreadful, which explains why there is 89% of bets and 98% of the money in favor of the Tampa Bay Lightning to cover a one-goal spread on the road tonight. That’s the crazier side in my eyes.

The gap between these two is wide, but it’s not that wide. Tampa isn’t its usual juggernaut this year; the Bolts are just 12th in xGF% (52.0%). The Hawks are fourth from the bottom (42.7%) despite their league-worst record, so they’ve been a bit unlucky.

Chicago might have also found something in Alex Stalock, who holds a solid 3.39 GSAx in 10 starts. Of course, no one will give him the edge over Andrei Vasilevskiy (14.34 GSAx), but we don’t need an outright win from Chicago.

Our model sees the Blackhawks keeping this game within a tally 57.3% of the time. This is its strongest recommendation of the day, per our projections.

So, Edmonton is a little better, right? Well, that gap widens significantly in goal. Stuart Skinner has been excellent this year (13.25 GSAx; eighth-best in the NHL), and Martin Jones (-3.84 GSAx) has been closer to dreadful.

The public — in the form of 75% of the bets — is siding with Edmonton, so these odds may balloon throughout the day. The Oilers just won 7-2 in Seattle. Our model expects a repeat result. It thinks Connor McDavid’s guys win 70.5% of the time against these 60.3% implied odds.