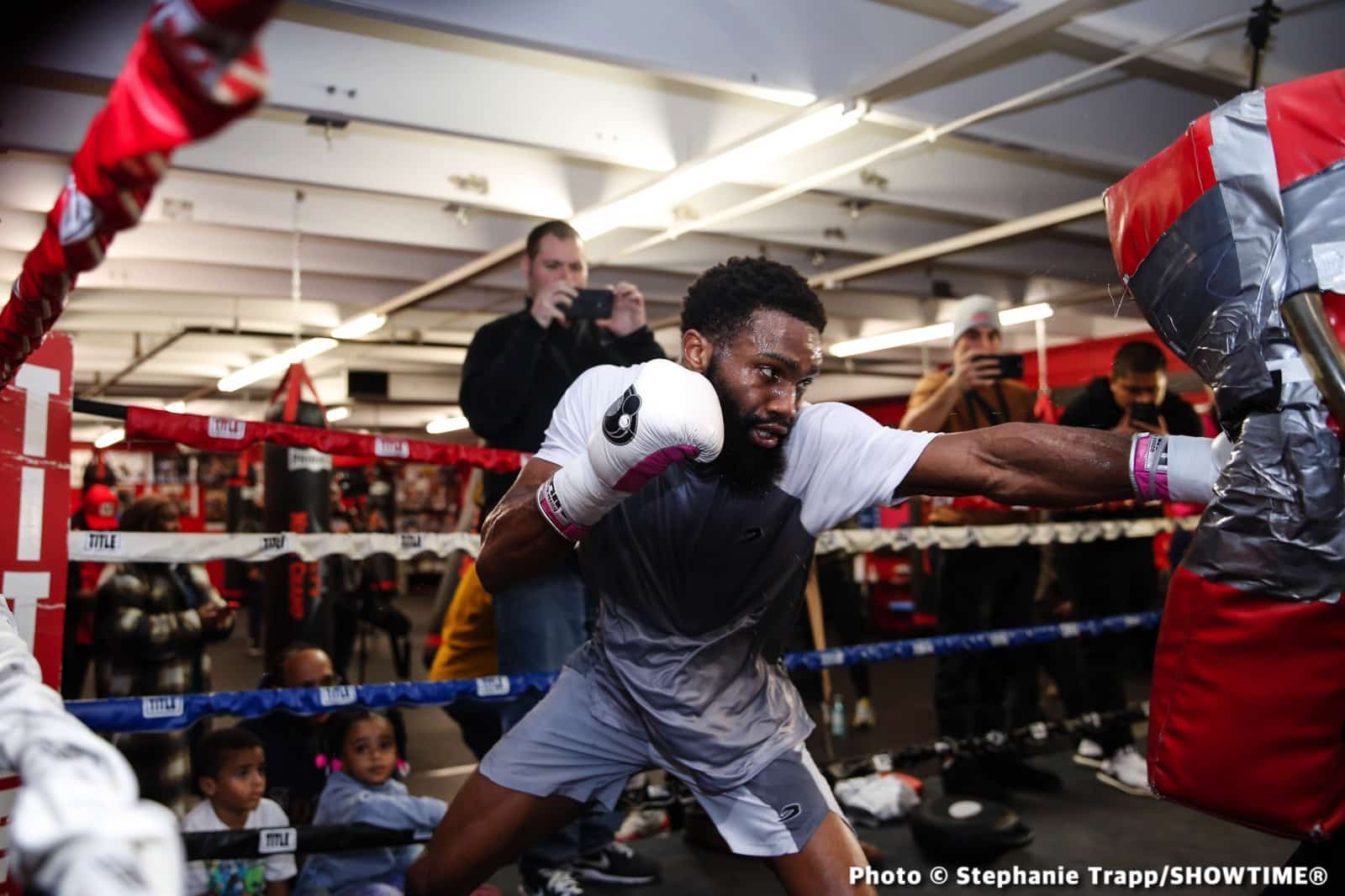 By Craig Daly: Video of welterweight contender Jaron ‘Boots’ Ennis was leaked of him sparring with super bantamweight champion Stephen Fulton ahead of this Saturday’s battle against Karen Chukhadzhian for the interim IBF 147-lb title at the Capitol One Arena in Washington, D.C.

In the sparring clip, Ennis (29-0, 27 KOs) appears to be purposefully holding back, focusing on his defense rather than unloading on the smaller and much weaker Fulton.

If Ennis, 25, defeats Chukhadzhian (21-1, 11 KOs) on Saturday, he’ll be able to exert further pressure on IBF/WBA/WBC welterweight champion Spence to face him.

Spence will have these options:

Boots Ennis’ defense is what some feel that he needs work on because he got hit a few times in his fights against Sergey Lipinets,  Chris Van Heerden, and Thomas Dulorme before he took them out.

“Will anybody be able to give him [Boots Ennis] any kind of push back? Will it be this fight against Karen Chukhadzhian? We don’t know yet,” said Brian Campbell to Morning Kombat about Jaron ‘Boots’ Ennis.

“Chukhadzhian has fought outside of American television to get to this point where he’ll be fighting for the IBF interim world title. The key here for Boots Ennis that this victory, already being Errol Spence’s mandatory in the WBA, the elites can’t sidestep him any further.

“Boots Ennis’ father came out and said, after this fight, if Boots wins, they believe the understanding is Errol Spence has 120 days to announce the fight against him as Ennis as the mandatory challenger or give up a title.

“There are a few things that can happen. Spence can announce a fight with Crawford, and the sanctioning bodies can give a pass. That’s an undisputed fight, and the understanding is the winner fight the winner of this fight later, or Spence can give up a title, or Boots can be paid sidestep money for that to happen or Errol can be faced with the decision of facing Boots for that title or give it up.

“He can’t be avoided any longer if he gets this victory over Karen Chukhadzhian. This is a platform for the co-main event in the pay-per-view, where Boots can continue to kick the TV screen to let you know that he’s that rare talent.

“We’ll see if there’s the kind of pushback [from Karen] that lets him show that extra gear. I talked to him a few weeks ago. I was ringside when he blew away Thomas Dulorme in less than a round. He sliced right through him.

“Go back and look at his highlights. He’s faced some fairly legit fighters like Lipinets that could have potentially tested him. No, he sliced right through them.

“He’s something super special here. He’s got all the video game buttons you can press to do all the crazy s**t. This is a big fight, though. Spence is going to be faced with a tough decision.

“Spence put out a cryptic Tweet, saying ‘April.’ Does that mean that’s when he’s coming back to fight Keith Thurman? Or is he going to be pushed in the direction of this to make a fight with Terence Crawford

“I want Spence vs. Crawford, but either of those guys get replaced by Boots Ennis, that conversation is just as potent. It really is because we’re about to find out what we have here,” said Campbell.