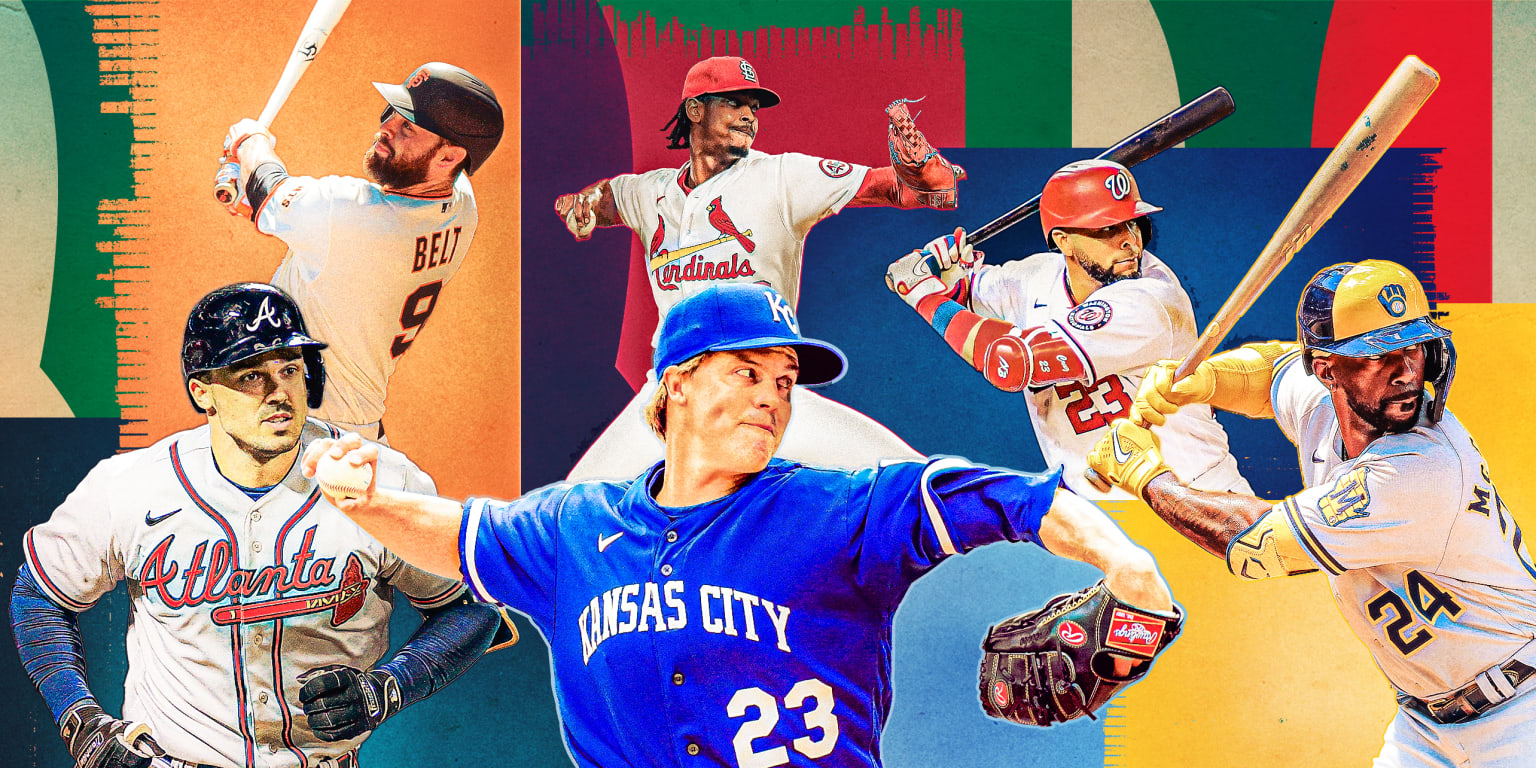 Though many of this offseason’s top free agents wasted no time finding new (or old) homes, there are still plenty of players available who could make an impact in 2023.

With that in mind, six MLB.com experts were asked to pick their most interesting remaining free agent on the market. To be clear, it’s not necessarily the best available player, but simply the most intriguing — for whatever reason.

Here are the six players who made the list:

Andrew McCutchen, LF/DH
It’s been a very long time since McCutchen was the MVP centerpiece of some very good Pirates teams, and, at 36 years old, he’s not likely to be viewed as an everyday player for teams hoping to contend in 2023. That said, in the right situation, there’s still an opportunity to contribute, because he’s a league-average bat who’s got a streak of 14 consecutive double-digit-homer seasons going, and his running speed is still near the top of the league — even after tearing his left ACL in 2019.

These days, McCutchen is most effective against lefty pitching (.901 OPS over the last three seasons, compared to just a .672 mark against righties), so it’s not hard to see a fit on a club with young, lefty outfielders, like Seattle (where he could platoon with Jarred Kelenic) or Arizona. Maybe “aging platoon part-time DH” doesn’t excite you. But who among us wouldn’t want to see one of the most important players of the last 15 years finally get a chance at that ring he’s never been close to?
– Mike Petriello

Nelson Cruz, DH
It’s so easy to take a quick glance at Cruz’s 2022 stat line, with his career-worst .337 slugging percentage and other sad marks, and say, “Ah, he’s too old.” But Cruz, who didn’t experience his breakthrough season until his age-28 campaign in 2009, has sort of always been old in the Majors. And until very recently, he was unquestionably elite at the plate. From 2015-20, no player crushed more homers (220) and only Mike Trout had a higher OPS+. Cruz was on his way to another stellar year in ‘21, slashing .294/.370/.537 with 19 home runs in 85 games with the Twins before he was dealt to the Rays just three weeks after his 41st birthday.

Cruz hit 13 dingers for Tampa Bay, but his batting average (.226) and on-base percentage (.283) fell off a cliff. Matters didn’t improve last year with the Nationals. He still hit the ball hard with regularity, but his power totals plummeted. His .103 ISO ranked 120th out of 130 qualified batters. Was this the inescapable grip of time on Cruz’s shoulder or something more tangible? In October, he presented a good reason to believe it was the latter: He couldn’t see clearly out of his left eye. Cruz said then that he had been dogged by the issue for almost a year and a half. Surgery at the end of the month was a success. He should be ready for Spring Training and has stated his desire to keep playing.

With Albert Pujols retired, Cruz holds the crown as the oldest active position player in MLB (lefty pitcher Rich Hill arrived into this world a few months earlier). Cruz is also just 41 home runs away from 500. He almost certainly won’t reach that revered benchmark in 2023, his age-42 season. But with his vision restored, Cruz deserves a look from a team searching for some lineup thump.
– Brian Murphy

Alex Reyes, RHP
Reyes is tantalizing if he pitches, but that might be the biggest “if” of any free agent out there. The former Cardinals top prospect has pitched a full season only once in the seven years since his big league debut. That one season, 2021, was great, as Reyes was an All-Star reliever for St. Louis. Instead of building on it, though, Reyes missed all of ’22 due to right shoulder surgery.

But if a team throws a dart on Reyes and he stays healthy, that club is getting a 28-year-old pitcher who has a 2.86 career ERA and averages 11.0 strikeouts per nine innings — and he throws in the upper 90s with a wipeout slider. Reyes’ last season on the mound, his fastball averaged 96.6 mph and his slider generated a 56% whiff rate, making it a top-5 swing-and-miss breaking ball in 2021, behind only Craig Kimbrel’s knuckle-curve, Jacob deGrom’s slider, Liam Hendriks’ slider and Josh Hader’s slider. With the top closers now off the market, you’re not going to find many remaining free-agent relievers with Reyes’ talent, and none that are so young.
– David Adler

But Duvall had a strikeout rate of 31.4% in 2021 — and that didn’t stop him from racking up 38 home runs and 113 RBIs. He also had a ridiculous 19 Defensive Runs Saved during that 2021 campaign, tied with Michael A. Taylor for the most by any outfielder. It was good enough to earn Duvall his first career Gold Glove Award. There are certainly some risks when it comes to Duvall. He’s 34 years old, he’s coming off wrist surgery and he’s going to strike out plenty. But if he can rediscover his ’21 form that helped lead the Braves to a World Series title, he could help just about any lineup.
– Paul Casella

Brandon Belt, 1B
A soon-to-be 35-year-old first baseman with a significant injury history and a .676 OPS (92 OPS+) in 2022 might not seem all that interesting, but consider what Belt did when he was healthy across 2020-21. The veteran slashed .285/.393/.595 with 38 homers over 148 games in that span, and his 165 OPS+ ranked third in MLB (minimum 500 plate appearances) behind only Bryce Harper and Juan Soto. Belt crushed the ball in that two-year stretch, registering a barrel rate (17.0%) that put him in the same neighborhood as some of the game’s most impressive sluggers.

Even last year, when his production dipped as he battled a lingering right knee injury that ultimately led to season-ending surgery, Belt had a 12.6% barrel rate, a number that would have ranked in the 87th percentile if he had enough plate appearances to qualify. He also had an excellent 12.4% walk rate, in line with his career mark. Belt is always an injury risk, but now that his knee issue has been addressed, his left-handed bat could be a potential difference-maker.
– Thomas Harrigan

If you look at most of Greinke’s 2022 numbers with the Royals, you see a pitcher who had no business being effective. His fastball velocity was in the fourth percentile (less than 20% of his “heaters” reached 90 mph). Of the 140 pitchers who threw 100 innings, his 12.5% strikeout rate ranked dead last. And yet, Greinke found a way by mixing five pitches, avoiding walks and generally using all of the crafty veteran-ness he could muster. While he averaged only a little more than 5 innings per outing across 26 starts, the six-time All-Star posted a 3.68 ERA that was 11% better than league average by ERA+ — the same as MLB strikeout king Gerrit Cole. (Amazingly, Greinke’s ERA was 2.53 over the six starts in which he struck out no more than one batter.)

Now, the issues mentioned above are undoubtedly concerning to potential suitors. Same goes for the fact that the gap between Greinke’s expected ERA, per Statcast, and his actual ERA was one of the widest of any regular starter. Father Time is undefeated, but the future potential Hall of Famer is not your typical pitcher in any way. If he finds a home for 2023, he will be worth watching.
– Andrew Simon