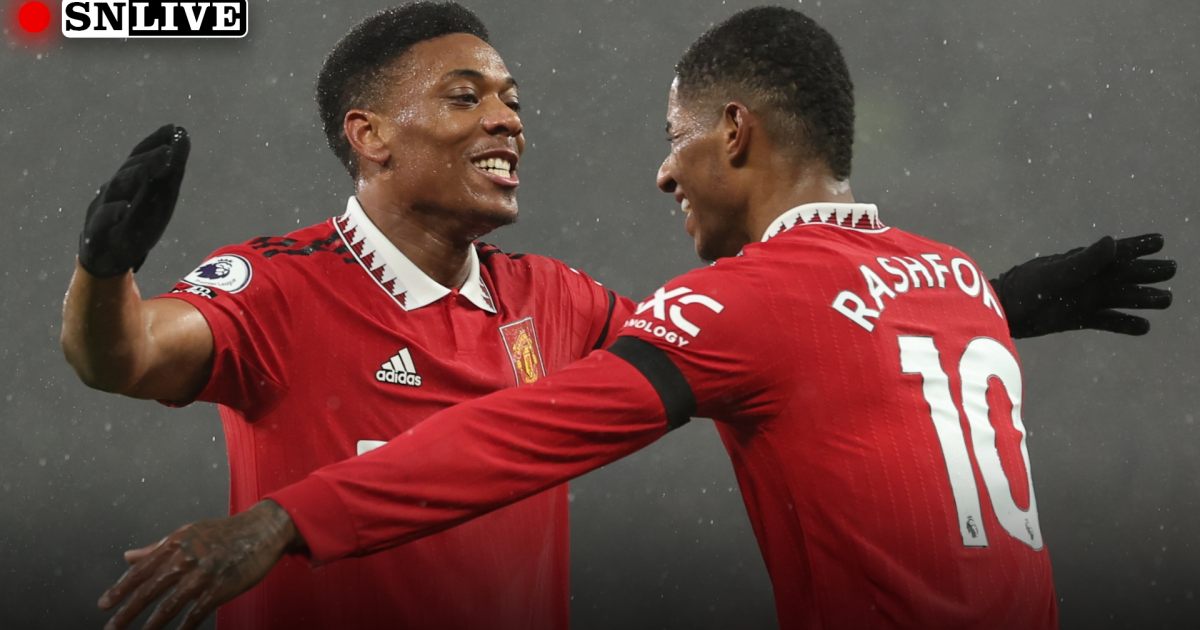 OLD TRAFFORD, MANCHESTER — Erik ten Hag gets his first taste of the FA Cup tonight as Manchester United host Everton in the third round.

The Red Devils have won all four of their matches since the World Cup without conceding a goal and will look to progress to round four and keep alive their challenge for a possible four trophies this season.

Standing in their way are Everton, still reeling from a 4-1 home loss to Brighton & Hove Albion that has piled pressure on manager Frank Lampard. However, having held Manchester City to a 1-1 draw in their last visit to the city, the Toffees might believe an upset is on the cards away from the pressures of Premier League football.

MORE: How to watch Everton vs. Man United

KO: Everton get us underway!

5 mins before KO: The players are just emerging from the tunnel. There’s a deafening noise from the busy away end, most of which is angry singing directed at the Everton board.

20 mins before KO: Not long to go now until the third round of the FA Cup gets underway!

40 mins before KO: Ten Hag has resisted the temptation to field an inexperienced side, which is perhaps not surprising: as he said in his pre-match programme notes, United “aim to do well in every competition and win every game we play”. Still, you’d expect him to make changes against Charlton next week, with Manchester City and Arsenal to come before the end of January.

1 hr before KO: The team news is in, and United have named a strong side, which suggests there will be more rotation for next week’s League Cup match with Charlton Athletic.

Diogo Dalot returns at right-back, while Tyrell Malacia is on the other flank, with Luke Shaw keeping his place at centre-back. Antony, Marcus Rashford and Anthony Martial all start. New signing Jack Butland is not involved.

🥁 Presenting your 11 Reds to take on Everton in the #FACup! 👏#MUFC

Everton are also going with a strong team in what looks to be a 5-3-2, with Neal Maupay and Demarai Gray, who scored that stunner against Man City, leading the attack.

1 hr 20 mins before KO: This game would normally be something of a free hit for Everton, who wouldn’t be expected to overcome the 20-time champions of England on home turf. However, given the pressure on manager Frank Lampard, they could really do with a good result: the five-time FA Cup champions haven’t won a match since October, and that 4-1 home thrashing by Brighton three days ago has left Lampard on perilous ground. Another heavy defeat here, and it might just spell the end of his time in charge.

4 – Brighton have scored four goals in a top-flight away game for the first time in their history, with all four goals coming inside the first hour of the match. Rampant. pic.twitter.com/E9b7BlKiAw

1 hr 40 mins before KO: The last time these teams met in the FA Cup was in April 2016 – the year United last lifted the trophy. They beat the Toffees 2-1 at Wembley in the semifinals, with Anthony Martial scoring an injury-time winner. The French striker is an injury doubt for tonight but Erik ten Hag thinks he will be fit to play.

Look at the scenes 🤩

2 hrs before KO: Manchester United look to continue their good form since the World Cup and keep their quest alive to challenge for a possible four trophies this season. As for Everton, only a surprise positive result it likely to ease the significant pressure on manager Frank Lampard. We’re live at Old Trafford to bring you coverage of this FA Cup encounter — the first of the third round.

Jadon Sancho and Axel Tuanzebe remain out for United, but Diogo Dalot is back in the side at right-back and Luke Shaw keeps his place in the middle alongside Raphael Varane.

Antony, Marcus Rashford and Anthony Martial all start in a strong United side. New loan signing Jack Butland is not in the squad, having only completed his move today.

James Garner, who Everton signed from United in September, will miss a visit to his former club with a back injury.

Michael Keane and Andros Townsend (both knee) will be unavailable but Amadou Onana returns following his suspension for the league game at home to Brighton on Tuesday. Neal Maupay and Demarai Gray lead the attack.

What time is Man United vs. Everton kick off?

Man United play host to Everton at Old Trafford in Manchester, England. It kicks off at 8 p.m. GMT on Friday, January 6.

Here’s how that time translates across some of the major territories.

*Game starts on January 7 in these time zones

Here’s how to watch all of the action from this match in some of the major territores:

UK: The match will be shown on TV and streamed live by ITV.

USA: ESPN+ has live coverage of the game.

Australia: Paramount+ is the place to watch the action in Australia.

United are huge favourites to beat opponents who have not triumphed at Old Trafford in eight attempts and are currently six games without victory on the road in all competitions.

Each of Everton’s past three trips to United, however, have finished all-square – and they will be encouraged by their recovery to draw 1-1 at reigning Premier League champions Manchester City on Saturday, scoring their second goal of those six most recent away matches.