David Ford takes a two-stroke lead into final round 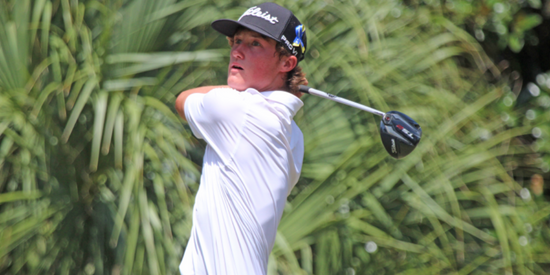 David Ford will be the leader going into the final round on Sunday in the Jones Cup Invitational at Ocean Forest Golf Club on Sea Island, Ga.

Ford, who led after the first round, stayed atop the leaderboard following the second round on Saturday when he posted a 4-under-par 68 for a 9-under 135 score through the first 36 holes of the three-round tournament that is kicking off a new season in amateur golf this year.

A sophomore at the University of North Carolina from Peachtree Corners, Ga., Ford grabbed the early lead on Friday with a 67 in the opening round. He led by a shot after the first 18 holes over North Carolina teammate Peter Fountain who posted a 68 in the first round.

Fountain shot a 71 on Saturday and is 5-under for the tournament, putting him four shots back of Ford going into the final round as the two Tar Heels will play together on Sunday in the final group.

They will be joined in the final pairing by Tennessee freshman Caleb Surratt who is actually second on the leaderboard going into Sunday after carding the low round thus far in the first major tournament of the 2023 season as he fired a 66 on Saturday afternoon to bolt into contention. Surratt, who opened with a 71 in the first round, will start the closing 18 just two shots back of Ford at 7-under.

The last time Ford and Surratt played in an official competition together on the Georgia coast, they also were paired together in the last grouping in the final round. That was at the Southern Amateur last July at the Plantation Course at the Sea Island Golf Club which Ford won while tying the tournament’s all-time scoring record at 20-under par.

Surratt settled for a fourth-place finish there, four shots back of Ford. He went on to win the first Elite Amateur Cup as part of a huge summer when he finished top 5 in four of the seven tournaments that made up the Elite Series before capping his summer with a runner-up finish at the U.S. Junior.

On Saturday, playing on a sun-kissed day with temperatures in the low 60s and little wind, Ford and Surratt filled their scorecards with birdies on the back nine at Ocean Forest. Ford, who played the front nine in even par with a birdie and a bogey, made four birdies on his inward nine including three in a row on holes 14 through 16 before settling for pars on the final two holes after strong birdie attempts.

“I didn’t really hit it very well on the front and made some putts I needed to, but didn’t really have anything going for me,” Ford said. “I just kinda stayed patient, started hitting it a little better and putts started falling, so I ended up with a pretty good score.”

“I’m reading these greens really well, I think. They’re similar to Sea Island Plantation. The speed of them, and how I see them is really clear,” he said.

Surratt made an early birdie on the third hole Saturday but gave the shot back with a bogey two holes later. He would jump-start his round again with back-to-back birdies on the eighth and ninth holes to head to the back nine 2-under on the day.

He made par on the par-5 10th which he said felt like a birdie after his tee shot landed against a tree and forced him to take a drop. From there, he would birdie five of his next six holes, with the only blemish on his scorecard being a bogey 5 at No. 13. Like Ford, he also birdied holes 14, 15 and 16 before parring the final two holes.

Surratt, who won his first collegiate start with the Volunteers this fall, said he got off to a slow beginning Saturday because he didn’t warm up properly. He spent too much time practicing chipping after not doing that as well as he would like in the first round and left himself only about 20 minutes to hit balls on the practice range.

“I was super-rushed and have to be more disciplined on time management,” he admitted. “I had to let rhythm build in the round. I let it come to me, and sure enough, it ended up being a really good day.”

The Jones Cup, now in its 19th year, has traditionally been played in early February, but this year moved to the first weekend in January as Ocean Forest is scheduled to close at the end of the month for course renovations which will keep the course closed until the fall.

The tournament always attracts one of the strongest fields of the year, rivaling those at other big amateur tournaments on the annual amateur golf circuit. This year’s tournament field is as strong as any in the past assembled at Ocean Forest as nine of the top 25 players in the world in the Golfweek/AmateurGolf.com rankings were entered to play including three players ranked among the top 10.

The course is as challenging as ever, too. Following Saturday’s round, only 15 players in the 84-man field were under par after 36 holes with two players at even par after the first two days of play.

Live scoring is available by going to www.jonescupinvitational.com.

When seen by AmateurGolf.com on Friday, Byrd was teeing off on the first hole with his father Jonathan Byrd watching from the gallery. A local touring professional, Jonathan Byrd is a five-time winner on the PGA Tour. Byrd, who plays out of the Sea Island Golf Club, was wearing a Clemson hat on Friday. He was a three-time All-American for the Tigers and played for the 1999 Walker Cup team.

Jackson Byrd is a sophomore in high school this year and figures to be one of the top prospects in the Class of 2025.

Jackson played the first two rounds with Parker Claxton, currently as a freshman on the Georgia Southern golf team. His father Paul Claxton was working as his caddie. Paul Claxton is a former PGA Tour player who also played out of Sea Island. He became a club professional in Georgia after his touring professional career.

Another Known Name: Fanny Sunesson, best known for the time she spent caddying for golfing great Nick Faldo, is also caddying this week in the Jones Cup. She is on the bag of England’s Frank Kennedy.

Sunesson worked for Faldo from 1990 to 1999 when she became the first woman caddie to win a men’s major golf championship. She was on Faldo’s bag for four victories in major championships. She also caddied for Sergio Garcia, Fred Funk, Notah Begay, Adam Scott and Henrik Stenson.

No Aces: An Ocean Forest member volunteering at the par-3 17th hole was enjoying the action and the sunshine Saturday afternoon as manned his spot around the green when a reporter overheard him say “we’ve seen a little bit of everything here, but never a hole in one.”

The volunteer has been working this same par-3 hole at the Jones Cup for the last seven years. The hole might be short, but it is far from easy, as he knows. It plays 215 yards from the tournament tee and a hard wind can be blowing at any time off the Atlantic Ocean which serves as a picturesque backdrop to the hole. It’s not uncommon for even the best amateurs in the world to have to hit a wood off the tee to the green which is surrounded by marsh with nothing breaking the wind blowing directly in their face off the water.

On Saturday, the chances to see a hole-in-one may have been better than usual. An alternate tee was being used which made the hole a little shorter and put the ocean to the right of the tee box, thus the wind was coming off the right side of the hole as well, though it was hardly a factor.

Peter Fountain, one of the leaders, stuck his tee shot inside 10 feet, as did playing partner Harley Smith, but neither player made their birdie putts.

The third member in their group, Vanderbilt’s Matthew Riedel, still found how difficult the hole can be. His tee shot came to rest in the sandy hazard and was nestled in some marsh grass up against the bulkhead that surrounds the green. He had already hit a provisional before leaving the tee and wound up playing that ball that was left of the pin and just off the green in the fringe. He missed the downhill putt for bogey and took a double-bogey.