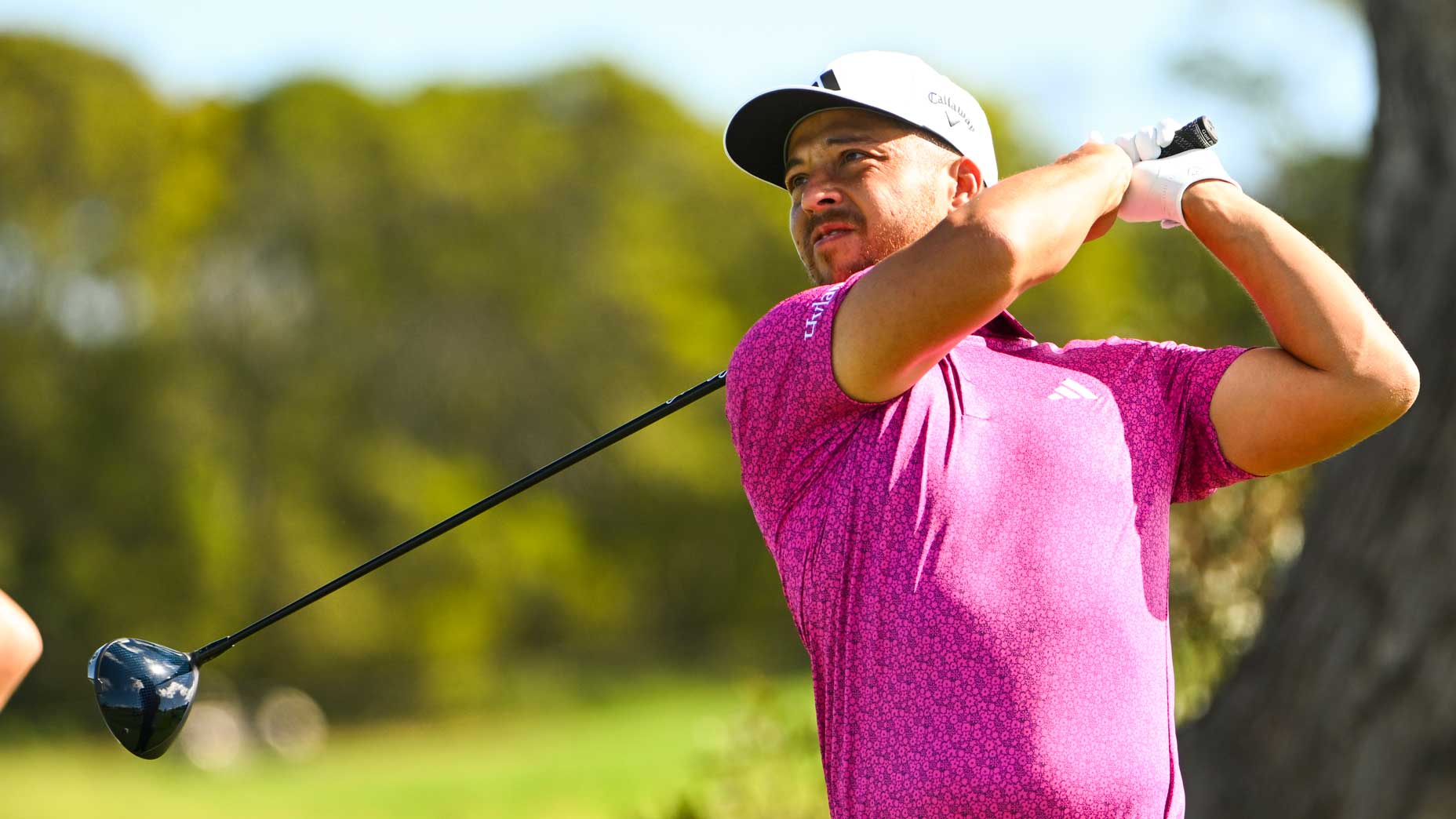 Xander Schauffele hits his tee shot on Friday on the 7th hole at the Plantation Course at Kapalua.

Matsuyama, you may remember, created a stir last June during the Memorial’s first round when he added a “White Out” substance to the face of his 3-wood. That’s a no-no, according to rule 4.3, which which PGA Tour rules official Steve Rintoul said at the time reads: “A substance or any treatment can’t be applied to the face of a club which could influence the flight of the ball, the spin, the loft or anything on the ball, how the ball performs.” The penalty after one use is a DQ, and Matsuyama was, though not until the 10th tee at Muirfield Village.

It’s here where things got murky.

Memorably, during a press conference midway through the first round, Rintoul said that a member of his rules committee had been sent pictures of the club and was asked whether they had seen it. The pictures, Rintoul said, were from a website — Golfwrx.com posted pictures of the club earlier this week — but Rintoul would not reveal who alerted the committee member when twice asked.

“Another person in the world of golf,” he first said. “We don’t need to get into that.”

“Another person in the golf industry,” Rintoul said when questioned again.

“You’re not willing …” a reporter started.

“I don’t think it’s important here,” Rintoul said. “It would have come across sooner or later. It was going to be on camera this afternoon.”

Rintoul said the message was received when Matsuyama and playing partners Rory McIlroy and Patrick Reed were on the first green, and he met Matsyama on the fifth tee. There, after Matsuyama told Rintoul that he had used the 3-wood, Rintoul took pictures of it and rubbed his fingernail across the substance, then took his evidence back to rules officials and told Matsuyama to keep playing.

In question was a white substance outlined in a circle on the club face, Rintoul described its texture as “White Out,” and rules officials determined that was enough to be a violation of rule 4.1a (3). And Matsuyama was told while he and his group were making the turn.

In his press conference, Rintoul added this clarification, though:

You are allowed to have smaller markings on the club face — “like a Sharpie dot” — and that if “the paint had been down in the grooves and in the bottom of the grooves where it’s not on the face, not making contact with the ball, again, no problem.” (Matsuyama also would have been allowed to continue either if the 3-wood had been just in his bag and not in play, or if the substance was removed before hitting it. This clarification, GOLF’s Sean Zak reported, was made in April.)

That brings us back to Schauffele.

According to gear site GolfWRX, the Callaway staffer was playing the new Paradym Triple Diamond driver this week at the Tournament of Champions, before withdrawing due to injury on Friday. And on the site’s Instagram page, there were six photos of the club, including one of the face.

With, yes, Sharpie lines on it. (Notably, the caption to the GolfWRX photo read: “It’s not paint.”)

The markings help with alignment, and a few pros have made the move in the past. But there are limits, as Matsuyama learned and Schauffele understood.

On Golf Channel last June, Rintoul offered up some advice.

“Don’t put paint on the face of your clubs at home.”

Nick Piastowski is a Senior Editor at Golf.com and Golf Magazine. In his role, he is responsible for editing, writing and developing stories across the golf space. And when he’s not writing about ways to hit the golf ball farther and straighter, the Milwaukee native is probably playing the game, hitting the ball left, right and short, and drinking a cold beer to wash away his score. You can reach out to him about any of these topics — his stories, his game or his beers — at nick.piastowski@golf.com.