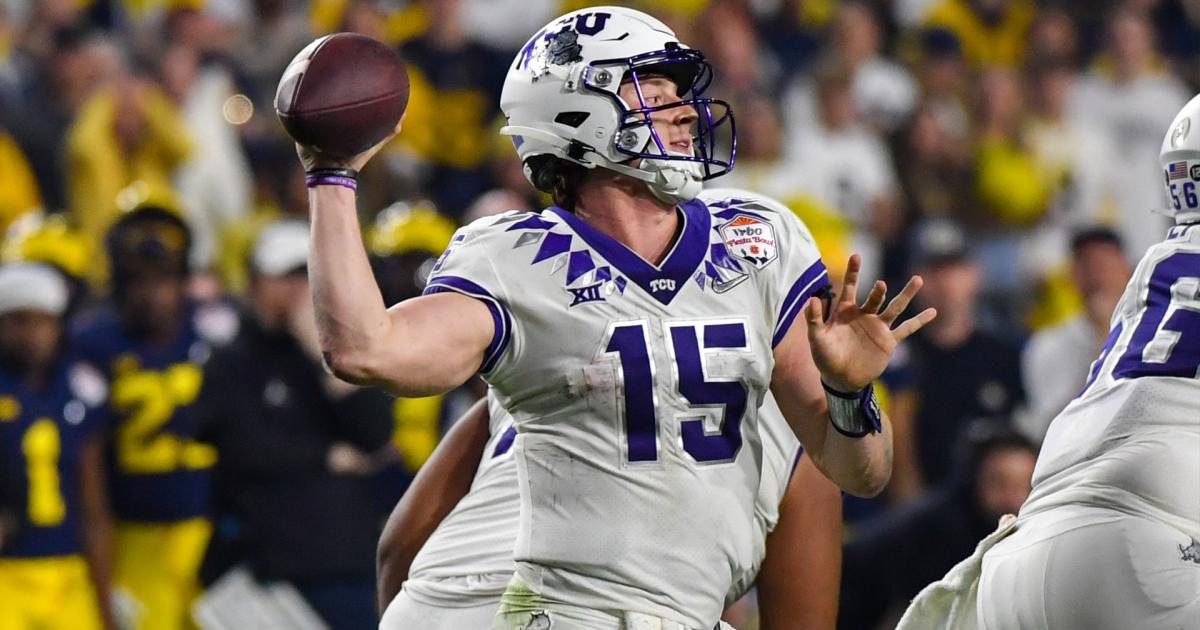 TCU has shocked the college football world this season. A program that finished just 5-7 a year ago and was projected to do little more in 2022 than possibly become bowl eligible under first-year head coach Sonny Dykes.

But the Horned Frogs have gone on an improbable run to the national championship game, where they will face reigning champion Georgia in search of TCU’s first title since 1938.

Behind the stunning run by TCU is a quarterback who has made his own improbable rise. A four-star recruit in the 2019 class, Duggan took over as the Horned Frogs’ starter two games into his collegiate career. And after three seasons posting solid, albeit unspectacular numbers, he burst onto the scene in 2022, finishing as runner-up for the Heisman Trophy behind USC’s Caleb Williams.

So far in his senior season, Duggan has 3,546 passing yards, 32 passing touchdowns, six interceptions and a 63.7 completion percentage. He also rushed for 461 yards and eight touchdowns on 127 carries.

Duggan’s extraordinary season hasn’t exactly vaulted him up NFL draft boards, but he certainly now has a shot at being selected by a team and becoming a pro quarterback.

What are NFL draft experts and projections saying about Duggan? Here’s what you need to know about his draft status:

Analysis: “Duggan could be a backup quarterback at the next level. His passing is too inconsistent in terms of accuracy and ball placement. Duggan aims throws and uses his strength to deliver the ball as opposed to being a natural passer. However, he does display good instincts as a quarterback.”

Walter Football does not currently have a mock draft with Duggan listed as a future draft pick, but the site believes he could find himself going in the third round or in the final four rounds of the draft. His profile compared him to Colts backup Sam Ehlinger and former Bronco Tim Tebow.

Analysis: “With Duggan, you know you’ll get 110% if he needs to come in as a pinch hitter, and that’s valuable. That’s why a team may choose to spend a sixth or seventh on him as a potential backup. Duggan has the requisite talent to fill that role, but he needs to keep refining his mechanics and lower his pulse in the pocket before he can be fully relied on.”

Pro Football Network praised Duggan’s intangibles like his leadership and football knowledge, as well as his mobility and his downfield touch, but overall said that his inconsistent mechanics and accuracy issues could prevent him from being drafted by a team.

Analysis: “The Horned Frogs’  backup to begin the season, Max Duggan wasn’t a prospect NFL scouts were talking about back in the summer. He has flipped the narrative with his play this season and is now in the mid-round discussion. Duggan’s accuracy and touch as a passer tend to be inconsistent, but he makes a handful of plays each game with his mobility and competitive toughness that make evaluators sit up in their seats. NFL coaches will want to work with him.”

The Athletic’s Dane Brugler said he believes Duggan has NFL-caliber arm strength and mobility that will help him get drafted by a team. He said Duggan still has some work to do before he can be viewed as a starter in the NFL, but noted that teams should consider taking a chance on him in the middle rounds of the draft.