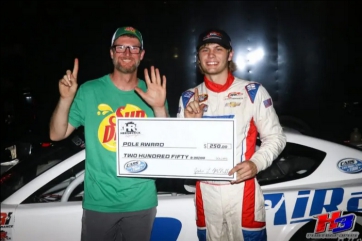 The CARS Tour will have some new ownership when the 2023 season begins this year. On Monday, it was announced that Dale Earnhardt Jr., Jeff Burton, Kevin Harvick and Justin Marks purchased the asphalt late model series.

“This is a dream come true for me,” Dale Earnhardt Jr. said on Monday afternoon. “I’m a huge fan of the CARS Tour and local short-track racing. The competition, the tracks and the drivers are some of the best around. These regional series are vital to the quality of racing you see at the top level. Jack has done a tremendous job establishing the CARS Tour as a preeminent series and I’m thrilled to be apart of its future.

As result of the announcement, the 2023 schedule will remain the same. The 2023 schedule is set with 19 race weekends and Jack McNelly will continue to oversee racing operations and the events at the track.

“Owning and developing the CARS Tour has been an honor and one I’m immensely proud of,” said McNelly in a statement. “Fortunately it’s in the best of hands with this new group. They have the passion and the talent to take the Tour to the next level. I can’t wait to see what this next chapter brings for everyone involved. I give my heartfelt thanks to all that have contributed to the success of the series over the years. It has truly been a team effort. The CARS Tour staff, officials,  competitors, sponsors and fans have made this series one of the best in the country.”

“I grew up racing late models on the west coast,” Kevin Harvick said. “Late model racing has always been a passion of mine and I want to ensure short-track asphalt racing and the CARS Tour continue to succeed. I look forward to sharing the responsibility with this like-minded group of racers.”

“The opportunity to work with a group of sponsors that I have so much respect for in the sport and that I love is amazing,” Jeff Burton said.  “Collectively, I believe we can contribute to grass roots racing and the overall health of motorsports in the process by building off the positive foundation Jack has built, I’m confident we can create a next-level experience for the competitors, partners and fans.”