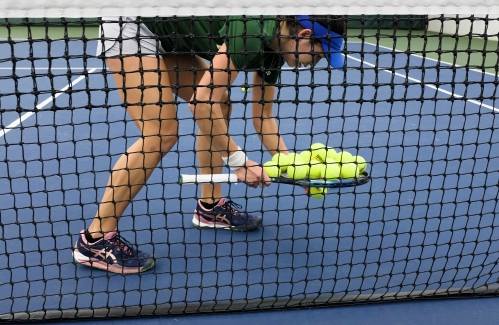 HANOVER — By her own estimation, Taylor Ng had picked up a tennis racket twice in nearly two years after graduating from Dartmouth College in 2017.

One of Dartmouth’s best women’s tennis players ever, Ng was named Ivy League Player of the Year as a sophomore, played at the No. 1 singles position for three years and helped the Big Green reach two NCAA Tournaments, to go along with a share of the 2017 Ivy League championship. But she felt ready to leave the sport behind, moving to New York and taking a job as an investment banking analyst.

Early in 2019, though, Ng was visiting a friend in Boston and watching a women’s tennis match at Boston University, and quickly realized how much she missed being on the court.

“I joked to that friend, ‘What if I just dropped everything and tried to play tennis professionally?’ ” Ng said. “A few days later, I was at the office late at night, and as I started thinking about it more, I (knew) if I were to do it, there’s such a small window when it’s physically possible. I decided to go for it. I always try to live my life with no regrets and no what-ifs.”

Nearly four years later, Ng is still trying to prove herself in the professional ranks. After a limited schedule in 2020 due to COVID-19, she began playing full throttle in mid-2021 and is currently ranked 328th in the world in singles and 285th in doubles. Both rankings are several hundred spots above where she finished 2021, her first full pro season.

Ng, 27, had been training at an academy in South Carolina but is now based at Dartmouth, opting to work with Big Green coach Bob Dallis. When she is in the Upper Valley, Ng helps out the Dartmouth team as a volunteer assistant coach.

“It’s been such an amazing experience. Bob is definitely the best coach I’ve ever had,” Ng said. “To be able to learn from him and see how he things, and to work with him, it’s invaluable. It’s helped me a ton as I play on tour, and it’s super helpful when I work with him one-on-one in preparation for tournaments.”

Growing up in Haddonfield, N.J., Ng first picked up tennis at age 4, but only committed to the sport at around 16. She played just about every sport she had time for — lacrosse, soccer, golf, basketball — but when it came time to specialize, Ng was between lacrosse and tennis, choosing the latter because it has aspects of both individual and team sports.

Ng knew if she wanted to get recruited, she had to compete in more tournaments. She was in Pennsylvania in May 2012 when Dallis came to scout her, and Dallis was impressed by both Ng and her family.

“She was the only person in the tournament I was recruiting, so I got a chance to watch her play four or five matches that weekend,” Dallis said. “It was obvious from that event that she was both a very good player and came from a really good family. Her sportsmanship was really good. Her parents were very supportive, but in a manner that helps create a player who is going to be really good.”

Upon arriving in Hanover, Ng enjoyed a strong debut season, earning second team all-Ivy honors as a freshman and winning her last five singles matches. But that was just a warmup for her explosive sophomore year. Ng went 21-1 at No. 1 singles, reached No. 40 in the national rankings and became the first Dartmouth athlete to qualify for the NCAA singles championships.

She earned two more first team all-Ivy selections as a junior and senior, teaming with Kristina Mathis to form the Big Green’s first doubles pairing to reach the NCAA Tournament in 2016. Ng won the ITA Arthur Ashe Jr. Leadership and Sportsmanship Award during her junior season, and in 2017 was named ITA Northeast Region Player of the Year.

“Being able to achieve what we did as a team, twice, was really special,” Ng said. “It was a testament to the work that Bob and (assistant coach Dave Jones) had us do day in and day out. We were a very close team, and objectively, we weren’t always the most talented within the Ivy, but we carried ourselves well, we played for each other and it was always a team focus.”

Ng was also involved in the Upper Valley community during her undergrad years. She founded and developed a program that connected Dartmouth student-athlete mentors with elementary school students in Canaan to promote health and wellness and encourage them to be physically active. An economics and anthropology double major, Ng was named a Rockefeller Leadership Fellow, Dartmouth’s capstone leadership program for seniors.

That leadership experience prepared Ng well for the corporate world, but she put all that on hold to pursue professional tennis. She won her first singles tournament in November 2019 in Cancun, Mexico, winning every set through five matches, and won another singles title three years later in Helsinki, Finland, on a third-set tiebreak in the final. She has also won four championships in doubles, including two in the last two months with Katarina Jokic of Serbia.

Since turning pro, Ng has competed throughout North and South America and Europe, as well as Tunisia and Turkey. Her goal for 2023 is to play in the qualifying rounds for a Grand Slam tournament, and she and Dallis agree there is still significant room for improvement.

“That’s been a really cool experience, getting to see more of the world while doing what I love,” Ng said. “It’s been more rewarding than I could have possibly imagined.”