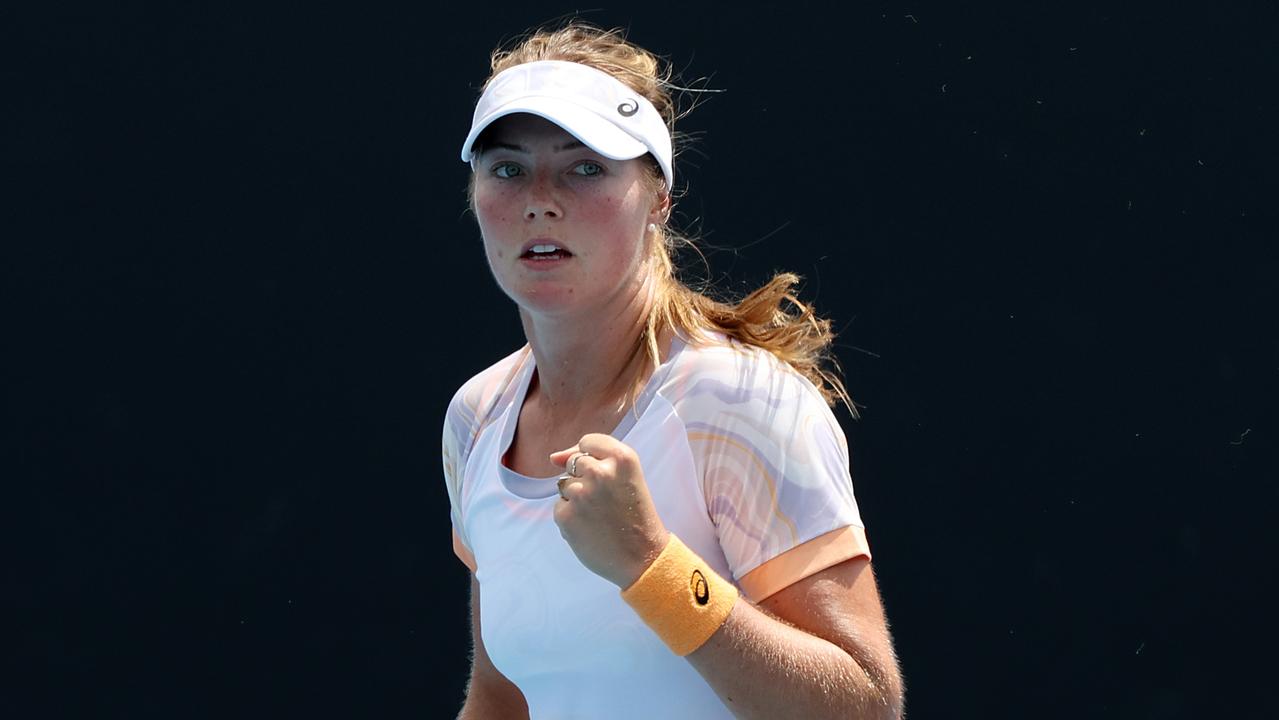 The 2023 Australian Open has finally begun, with the season-opening grand slam getting underway at Melbourne Park from Monday morning.

Six Aussies are in action today – and one star has already sealed a stunning victory. Meanwhile, a pair of American contenders ran riot with two highly impressive wins.

The weather is set to be an overcast 29 degrees with no rain expected, with crowds flooding in for the opening day’s play.

Follow day one at the Australian Open in our live blog below, with a full order of play and updates at the bottom of the article!

There’s been some tension on the opening day of the Australian Open.

Czech 25th seed Marie Bouzková called on the umpire to step in during her Round 1 clash with Bianca Andreescu.

Bouzková took exception to the level of noise the Canadian slam winner was making.

Her exchange with the umpire was caught on the on-court microphones.

“I’m hitting the ball and she’s screaming,” she could be heard saying.

22-year-old Andreescu has been as high as world number four but is currently ranked just 43rd in the world. The hard-hitting and exciting youngster won the US Open in 2019 but has never been past the second round at any of the other majors, and missed the 2022 Australian Open.

Less than 12 months after Ash Barty raised the Daphne Akhurst Memorial Cup, Australia’s women appeared to be staring down the barrel of an all-time low at their home slam.

Ajla Tomljanovic’s withdrawal this past weekend and Daria Saville’s existing injury mean the only two Aussie women ranked in the world’s top 150 were missing from the Australian Open.

With none of their compatriots making it through qualifying, just five wildcards made it into the Women’s Singles draw – Jaimee Fourlis (world No.160), Kim Birrell (No.166), Olivia Gadecki (No.200), Storm Hunter (No.227) and Talia Gibson (No.340).

It’s the first time Australia has failed to have an automatic main draw or qualifying entrant into the women’s Australian Open.

But Gadecki, the very first Aussie to hit the courts and playing in her very first slam, stunned 19-year-old qualifier Polina Kudermetova 7-5 6-1 – immediately wiping out fears that there would be Australian women in the second round for the first time in history.

20-year-old Gadecki’s career prizemoney entering the tournament was $175,000 AUD. But her victory today guarantees her at least $158,850 – almost doubling her career total in under two hours.

Nevertheless, it was a strong display of big-serving and powerful hitting, lashing down four aces and 10 winners – both significantly higher than her opponent.

Gadecki went to another level in the second set, surging to a 6-1 rout in front of a small crowd on Court 8 – and defending her first break point of the match at 4-1 up.

She said on-court: “I actually can’t believe it. I mean, wow. I’m speechless. Such an amazing crowd. Home slam, my first ever grand slam. A girl can only dream.”

Having missed last year’s Open due to not being Covid-19 vaccinated, she will now face a juicy second-round opponent in Ukraine’s Marta Kostyuk, who beat American 28th seed Amanda Anisimova in a shock boilover.

Kyrgios hits out after latest controversy as Bogut, Kokkinakis lash out at ‘nanny state’

‘Can only take so much’: Shock Nadal retirement call

FIRST SEED IN TEARS AFTER CRASHING OUT

28th seed Amanda Anisimova of the USA was left in tears as she became the first seeded player to be dumped out of the Australian Open, falling 6-3 6-4 to Marta Kostyuk of Ukraine.

21-year-old Anisimova reached the 2019 French Open semi-final, but had never gone beyond the quarter finals in Australia.

But she struggled against a fellow rising star in Kostyuk, the 20-year-old ranked 61st in the world.

She was followed soon afterwards by Czech 25th seed Marie Bouzkova, who was ousted in straight sets by Canadian star Bianca Andreescu 6-2 6-4.

It didn’t take long for a top contender to deliver a statement of intent.

She needed just 59 minutes to finish her match, claiming the very first victory of the tournament 6-0 6-1.

Pegula is the daughter of Buffalo Bills’ billionaire owner Terry Pegula, and a Bills’ fan was spotted waving a team flag in the stands as she took to Margaret Court Arena.

Pegula responded by signing off on her victory by writing on the camera “Go Bills”, adding “#3” and a love heart in a touching tribute to Bills player Damar Hamlin who suffered a terrifying heart attack on-field in recent weeks.

The seventh seed had on Saturday delivered a scary warning to her rivals, declaring that she still has significant room to grow despite reaching a maiden slam final at the 2022 French Open.

Gauff said: “I can’t put a percent on it, but I know the best is yet to come for me. I think that’s just looking at other players, when they’re winning most of their titles. So I do think I have a way to go.”

“I’ve noticed from 15, when I started, to now, I realize physically I’m at a much different level than I was at 15. I think I’m just continuing to get stronger.

“There’s a joke that my mom has. She is like, ‘You don’t have that grown woman strength yet. You’ll know when you get it.’”

Gauff landed 75% of her first serves in the opening set, hit 10 winners to four unforced errors, and nailed both break point attempts.

Gauff was broken early in the second set to fall 2-4 down, but hit back to first level the scores then pull ahead. Serving for the match at 5-4, Gauff endured a rollercoaster – spurning six match points and saving four break points of her own, before finally seeing off her gutsy opponent.

She will face 2021 US Open winner Emma Raducanu in the second round. Raducanu claimed a straight-sets 6-3 6-2 win over Germany’s Tamara Korpatsch. The 20-year-old Brit has slumped since that maiden Grand Slam title, and is now ranked 77th in the world.

Eyebrows have been raised after reigning Wimbledon champion Elena Rybakina’s Australian Open tilt will start out on court 13 at Melbourne Park on Monday.

The 23-year-old Kazakh defeated Tunisia’s Ons Jabeur in the Wimbledon decider last July but earned no points from the event.

Last season, Wimbledon banned Russian and Belarusian players from playing at the All-England Club over their nations’ involvement in the war in Ukraine. The ATP and WTA reacted by stripping the event of rankings points.

As Rybakina won the event, she would have earned 2000 points, meaning she would have been ranked eighth in the world if those points were added to her tally.

Instead, she is ranked 25th heading into the event and seeded 22 after some high profile absences from the Australian Open.

But ahead of her first round match on Monday, currently scheduled for 4.15pm, Rybakina will take on Italian 21-year-old Elisabetta Cocciaretto on Court 13 at Melbourne Park.

Cocciaretto is currently in good form, having made the final of the Hobart International.

“Reigning Wimbledon champ Elena Rybakina got relegated all the way out to the hinterland of Court 13 for her first #AusOpen match,” he wrote.

“I understand there is a saturation of recent women’s Slam champs, to an extent, but has a reigning Wimbledon champ ever been so quickly disregarded?”

He wasn’t the only one perplexed by the move.

He later added to Rothenberg’s post: “She got totally screwed by the pointless Wimbledon.

But this year should be different for a number of reasons. For a start, the pair are seeded (No.7), and the rest of the doubles world will be well aware of the threat they pose.

Then there is the Kyrgios singles question. After an ankle injury in the tournament lead-up he’s expected to prioritise his run through the Men’s Singles – which may include a quarter-final against Novak Djokovic.

Last year Kyrgios lost in the second round – his tournament was over by Day 4 – which meant he was able to focus on the doubles, which always begin on Day 3.

Asked whether he thinks the team can back up from the 2022 title, Kokkinakis admitted on the weekend: “No, I don’t.

“Last year was something we didn’t expect. I remember people messaged me after every match we won being like, ‘You’re going to win this thing’.

“Then it became a possibility from the quarterfinals, a legit thought, we can be better than these guys, we can win.”

He added: “We’re going to go out there and give 100 per cent and hopefully we’re both healthy going into it.”

The Special Ks will face Nicolas Barrientos and Ariel Behar in the first round of the doubles, likely on Wednesday, and could potentially face fellow Aussies John Millman and Aleks Vukic in the second round.

Day 1 Order Of Play (All courts from 11am, all times AEDT)

Night session not before 6pm

Follow updates from the Australian Open in our live blog below!