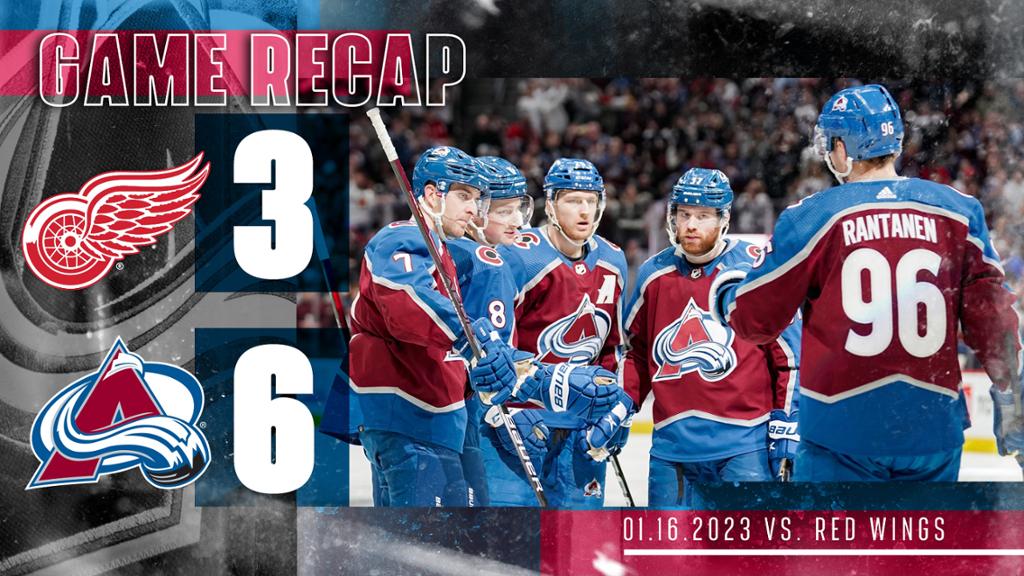 Firing on all cylinders.

The Colorado Avalanche executed another full-team effort to top the Detroit Red Wings 6-3 on Monday, the afternoon of Martin Luther King Jr. day at Ball Arena. Colorado is now 22-17-3 on the season.

For the Avalanche, Nathan MacKinnon (2G, 2A) paced the victory with a four-point outing, while Cale Makar (2G, 1A), Artturi Lehkonen and J.T. Compher (1G, 1A) also found the back of the net. Evan Rodrigues and Devon Toews each handed out two assists. Valeri Nichushkin returned to the lineup for the first time since Dec. 23 as he was sidelined due to a lower-body injury and recorded an assist.

In Colorado’s net, Pavel Francouz turned aside 26 of the 29 shots he faced as he made his third-straight start. The Avalanche utilized a lineup of 11 forwards and seven defensemen for the second-consecutive game.

For the Red Wings, Andrew Copp (1G, 1A), Ben Chiarot and Mortiz Seider scored. Between the pipes, Ville Husso made 17 saves on 22 shots through two periods, while Magnus Hellberg made four stops on five shots in the final 20 minutes of the game.

The Avalanche claimed their first set of consecutive wins since Dec. 21 and Dec. 23 as they executed a dominant full-team effort and defensive detailed game against the Red Wigs. Colorado also won the special teams battle going 2-for-4 on the power play and 2-for-2 on the penalty kill.

In a high-flying first period, Colorado skated out to a 2-0 lead over Detroit with an even-strength goal from Lehkonen early on and a late power-play strike from Makar.

Within the opening minutes of play, both sides exchanged dangerous chances as MacKinnon struck the crossbar 55 seconds into play and nearly a minute later, Francouz had to slide across his crease to make a backdoor pad save on Pius Suter.

The Avalanche went on to secure the game’s icebreaker at 5:12. From the slot, Lehkonen collected a pass from Makar, turn and fired a mid-height shot on net. The puck squeaked through a scrum of bodies of Red Wings defenseman Filip Hronek and Husso as MacKinnon sandwiched between them and lost his footing in the scramble. The Red Wings coaching staff challenged the goal for goaltender interference as MacKinnon made contact with Husso as he lost his stance, but upon review, it was determined that the contact was made outside of the blue paint and the opening goal was confirmed for the Avalanche.

Tweet from @Avalanche: What can���t Cale do? Answer is nothing. #GoAvsGo pic.twitter.com/MeBeYcl3ZX

Detroit subsequently killed off the delay of game penalty they had to take as a result of an incorrect challenge on Lehkonen’s goal.

Both sides continued to generate some chances. The Avalanche killed off a penalty at 11:13 and subsequently were denied on their second power play of the game at 13:26, but were fortuitous with their third power play of the first period as they converted at 18:04.

The Red Wings were whistled for too many men on the ice at 17:25. On the man advantage, Colorado circulated the puck around the zone and Makar wired a long-range shot from the blueline through traffic – and a netfront screen by Nichuhskin, who also picked up an assist on the play, – past Husso to double Colorado’s lead 2-0 heading into the first intermission.

The Avalanche unleashed the offense in the second period with a three-goal effort, while the Red Wings lit the lamp late to trim their deficit down 5-1 heading into the final 20 minutes of play.

Early on, Makar netted his second goal of the game as the blueliner collected a feed from MacKinnon in the right faceoff circle, charged to the net front, and snapped a low shot past Husso to pad Colorado’s lead 3-0.

The Avalanche’s dominance continued as they held the Red Wings without a shot through the first seven minutes and then converted on their second power-play goal of the afternoon. At 8:41, Detroit captain Dylan Larkin was called for slashing. On Colorado’s second power-play unit, Rodrigues centered a pass to the net front and from the bumper position, Compher dropped down to the backdoor and tapped the puck into the net to cushion the Avalanche’s lead 4-0 at 10:06.

At 15:53, Rodrigues dished out his second primary assist of the afternoon as he centered a feed to the low slot. MacKinnon jetted into the lane and put the puck past Husso for the Avalanche’s fifth goal of the game.

Late in the period the Red Wings were able to net a goal and rob Francouz of the shutout as Copp curled with the puck around the net to the right faceoff circle, and fired a low shot into the twine at 18:58.

Detroit replaced Husso in net with Hellberg to start the third period and early in the20 minutes, Colorado and Detroit exchanged goals with strikes from Chiarot and MacKinnon.

At 3:40, Larkin cleanly won an offensive zone faceoff in the left circle. The puck spat out to the point for Hronek, who passed it over to his defensive partner. Chiarot tee’d up his stance and blasted the one timer past Francouz’s glove to cut Detroit’s deficit down 5-2.

Tweet from @Avalanche: One step closer to tacos 🌮 #GoAvsGo pic.twitter.com/vw5gKawPkm

Colorado regained its four-goal lead at 5:24 on a persistent individual effort by MacKinnon. The centerman stripped Copp of the puck in the Avalanche’s defensive zone and zipped up ice for a breakaway before popping the puck past Hellberg to send Colorado’s lead up to 6-2.

Late in the period as the game was winding down, the Red Wings cycled the puck around the zone, sent a low-to-high pass out to Seider and the defenseman beat Francouz with his long-range shot at 19:26 to trim the final score down 6-3.

“It’s amazing [to get contributions up and down the lineup]. Even in that tough stretch we had guys working hard and putting in the effort they just weren’t getting rewarded. When that happens you can start to grip the stick so it’s just huge for guys to be getting rewarded.” – Cale Makar

The Avalanche hit the road for a three-game western swing with their first contest taking place on Wednesday at Calgary. The puck drops between the Avs and Flames at 7:30 p.m. MT.