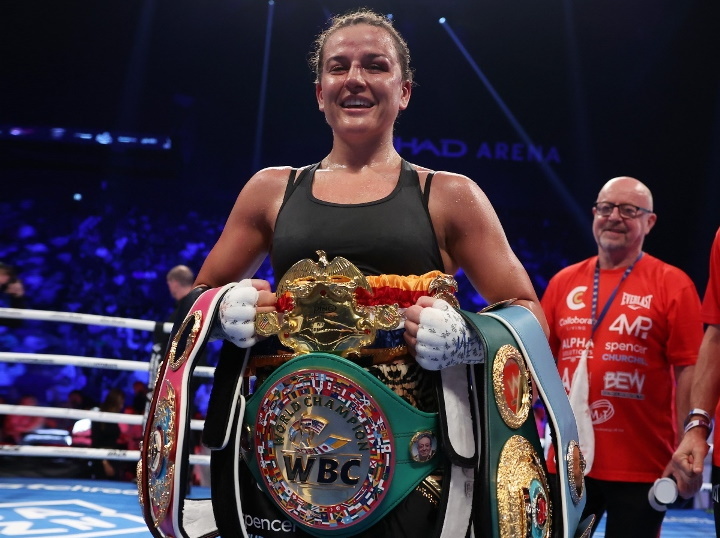 On Friday, Jessica Nery Plata defeated Kim Clavel in a Jr. flyweight unification. GivenYokasta Valle’s decision to remain unified at strawweight instead of 108 pounds, it left Plata as the lone major titlist at Jr. flyweight. A case can be made for Plata as the new lineal queen of her class.

There will be more fights between 105 and 112 in the year to come as this has become an intriguing hot spot in women’s boxing. It’s not the only one.

The final quarter of 2022 gave us several more big results in what was arguably the biggest year in women’s boxing history. Some of the movement from the first index to this first update, including a slight change in the scoring mirroring the men’s index, include:

To see how this all works out, here is the first update for 2023.

The Take: Along with Amanda Serrano, Shields has wins over four different (unique) contenders over the last three years. Shields wins the tiebreaker as all her ranked wins were in the top three of their division at the time. The two-time Olympic Gold Medalist has maintained a commendable level of competition since turning professional in 2016. Shields’ debut came against future-undisputed super middleweight champion Franchon Drews-Dezurn and she has fought almost nothing but leading contenders and current, former, or future titlists. Shields was both gritty and masterful in traveling overseas for her best professional win, reunifying the middleweight division versus Savannah Marshall to avenge her lone amateur defeat.

The Take: The UK’s Cameron entered the biggest fight of her career off two big wins over consensus top three Jr. welterweights Mary McGee and Victoria Bustos. Cameron came through big enough against welterweight queen Jessica McCaskill. Cameron built a healthy lead and withstood a late surge to retain her titles and add two more vacant titles to her mantle. For Cameron, a showdown with Katie Taylor would put plenty of butts in seats and push Cameron even farther into conversations about the best women’s boxer on the planet.

The Take: Natasha Jonas had an unlikely 2022. After settling for a draw in a Jr. lightweight challenge of Harper in 2020, and falling short in a challenge of Taylor for the lightweight title in 2021, Jonas jumped three weight classes and went on a tear. Jonas was 3-0 and acquired three alphabet straps on the year. While Shields may still be the lineal queen at Jr. middleweight, Jonas now owns The Ring’s title as well. The lone remaining major title for Jonas’ collection belongs to Harper, who has also made the jump some twenty pounds-plus up the scale in the last couple years. A rematch seems natural. Could a major clash with Shields also be a reward in 2023?

The Take: Taylor slips just a bit with an unranked foe in her last outing but remains the leader finishes on top as the leader in unique wins, including a win over the woman just ahead and just behind her in the top ten. Taylor’s five unique wins against ranked opposition is one more than her closest peers in Claressa Shields and Amanda Serrano and she’s had seven starts since the beginning of 2020. A five-time World Amateur champion and 2012 Olympic Gold medalist, Ireland’s Taylor won arguably the biggest fight in the history of women’s boxing when she weathered a violent mid-round assault to earn a decision over Serrano in April. Will she see Serrano again in 2023? Could Taylor venture up the scale to face the winner of Jessica McCaskill-Chantelle Cameron? There will be more big fights awaiting the lightweight queen in the year ahead.

The Take: Manny Pacquiao received wide acclaim for a career that took him to belts from flyweight to Jr. middleweight. Pacquiao did it over time, continually rising through weight classes. Serrano has won titles from 115-140 pounds in a far different order, once winning belts at 140 and then 115, in consecutive bouts, in that order. Right now, Serrano is ranked at lightweight and reigns with three belts at featherweight. A competitive loss to lightweight champion Katie Taylor in their superfight cost Serrano only a little bit here. A rematch between the two would be one of the biggest fights in boxing, men or women. Serrano will attempt to become the undisputed featherweight champion in her next bout with Hernandez.

Here’s how it works.

Using the most recent ratings available in a print issue of Ring or monthly sample of selected online rankings, and the most recent archived LBC ratings prior to a fight: