Best QB in the NFL right now? Breaking down the Patrick Mahomes vs. Joe Burrow vs. Josh Allen debate 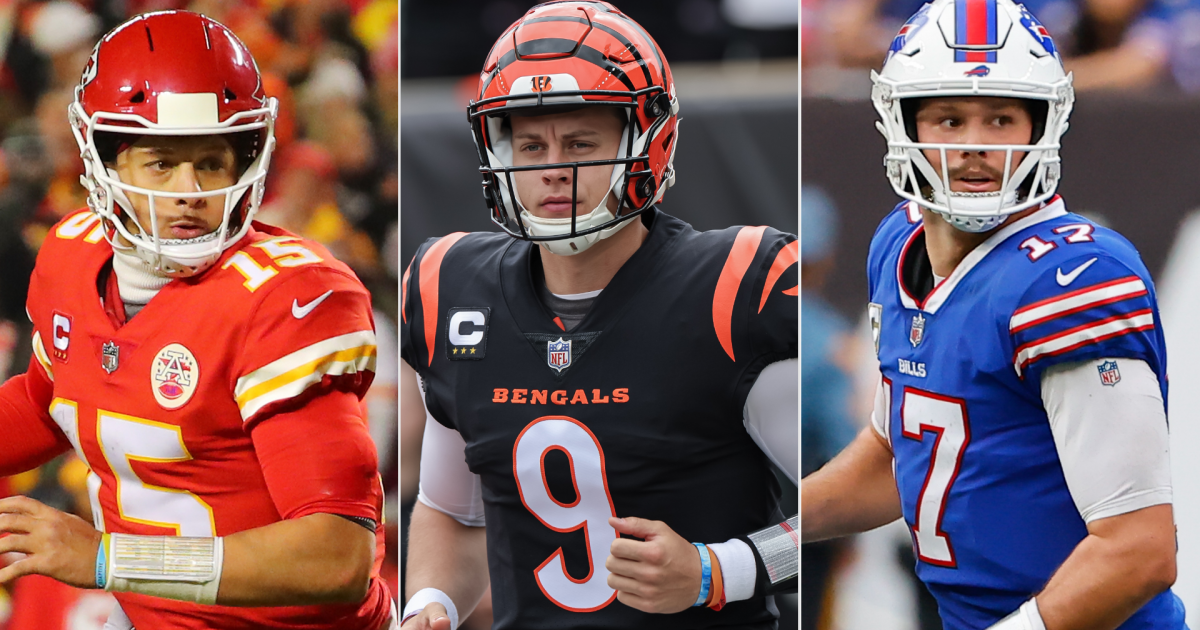 Who is the best quarterback in the NFL right now? It is a popular question without a definitive consistent answer, but what happens with the teams of Patrick Mahomes, Josh Allen and Joe Burrow from the AFC divisional playoffs through Super Bowl 57 will help provide a better one.

Tom Brady is the GOAT. Aaron Rodgers is the four-time MVP. But just like Drew Brees and Peyton Manning before them, a couple of disappointing 2022 seasons have suggested the end is nearer than the prime for the two future Hall of Famers.

Without Brady, Rodgers and Kirk Cousins in the NFC divisional playoffs, every starting QB left in the field is younger than 30, with 29-year-old Dak Prescott being the oldest in either conference. But between Prescott and younger NFC East QBs Jalen Hurts and Daniel Jones and 49ers rookie seventh-rounder Brock Purdy, there’s no “best QB” answer from the NFC.

So look to the AFC young guns, where it comes down to  Mahomes vs. Allen and Burrow. Trevor Lawrence, the other AFC final four QB, might be in the conversation at some point soon, but at the moment “best QB” is a three-man argument.

MORE: Ranking the NFL’s 2023 playoff QBs from best to worst

Before the regular season, Allen was the odds-on MVP favorite. Until late in the season, when Hurts missed time with a right shoulder injury, he emerged as a co-front runner. But now Mahomes has separated from Hurts and others as the clear best bet, with Burrow becoming the deep betting sleeper behind him.

Mahomes, as he’s done it longer than Allen and Burrow, seems to also be the best current answer for NFL’s best QB. As he works to play in his third Super Bowl, however and Allen’s Bills and Burrow’s Bengals are set to duel to get another shot at Mahomes’ Chiefs, that narrative might need to be revisited.

Is Mahomes bound to lose his solid case soon? Here’s getting ahead of the latest greatest quarterback debate, starting with the key numbers for all three

Allen has led the Bills into Kansas City three times to duel Mahomes. He was the better QB in the two regular-season victories in 2021 and 2022. They played to a back-and-forth draw in last year’s AFC divisional playoffs, with Mahomes having a little too much time to answer Allen in a thrilling 42-36 victory.

Based on the numbers, Mahomes is definitely the much more efficient and prolific quarterback. Mahomes also uses his lgegs well at times, but Allen is a unique, big dominant force as a runner and can take over games that way.

Mahomes has turned the ball over more than usual in the past two seasons as teams have worked to take away the deep ball and downfield throws have become more a of challenge without Tyreek Hill. Allen, however, also racked up 22 total turnovers this past season by losing 8 fumbles.

There’s no doubt physically, with his big arm, monster frame and freight train- like athleticism, Allen has all the traits to be better than Mahomes. But he must shake off some erratic and force play to surpass Mahomes.

Mahomes also has been to two Super Bowls, winning one. Allen needs to go through Mahomes and lead the Bills to his first AFC championship to open the door to get on Mahomes’ level first. Not having the same team and individual accolades takes Allen out of the equation for now, but that can change in a hurry should he go through Burrow and Mahomes back-to-back and fulfilling the Bills’ preseason promise as Super Bowl favorites.

Mahomes still holds on to a slim head-to-head edge over Allen’s Bills. But Burrow’s Bengals have gotten the best of him twice. The Bengals won a 34-31 shootout in Cincinnati in 2021. They took another home field-goal game against the Chiefs, 27-24 in Week 13 in 2022.

In between was the huge comeback victory in last year’s AFC championship game in Kansas City. Burrow helped his team rally from 21-10 down at halftime to a 27-24 overtime triumph.

Mahomes is used to being on the winning end of those comebacks, most notably against the 49ers, Texans and Titans in the playoffs. Burrow flipped that narrative in getting to the Super Bowl in his second starting season, beating Mahomes by a year.

Burrow put MVP-caliber numbers in Year 2, coming back strong from his rookie season cut short by a torn ACL. With some new offensive challenges and the defense adjusting to him, the numbers slipped a bit. But it was clear he took over a lot of games for the Bengals and made sure there would be no Super Bowl hangover.

Burrow also got hot in the second half again as Cincinnati is on a 10-game winning streak as repeat AFC North champion going into the matchup in Buffalo. Watch out for Burrow picking up where he left off vs. the Bills at home before the Week 17 Monday night matchup was suspended.

Allen and Burrow has yet to be seen to completion on the field. This becomes a much anticipated rematch, despite it being a fresh new match with a lot more at stake than AFC seeding.

Allen’s game has more flash than Burrow’s. He can make the jaw-dropping big throws and chunk runs where he’s hurdling or barreling through opponents. Burrow has some of that early Brady makeup as a pocket passer: calm, cold and cerebral. He has great accuracy and is closer to Mahomes’ efficiency in throwing the ball effectively all over the field.

Allen and Burrow both benefit from loaded receiving corps but also are hut by often shaky line play. That’s different from Mahomes in both areas. Burrow is less likely to force hero balls while Allen is more likely to make a big play when one doesn’t seem to be available.

Allen is the more dynamic runner but Burrow is more calculated, picking key spots to take off on third downs and in the red zone. Burrow is more willing to extend plays within the pocket, which puts him in more danger of taking sacks.

The bottom line is, Burrow has had a quick rise and put his team in the Super Bowl going through the major obstacle of Mahomes and the Chiefs. If he can do it again while also out-dueling Allen, it would be all there for him to emerge as the best QB going into 2023.

Mahomes still deserves to be dubbed “best quarterback in the NFL” until someone takes it away from him in these playoffs. For Allen or Burrow to dethrone him, it will first require one beating the other and then outplaying Mahomes. Should either do that and then match Mahomes with a ring, there will be a definitive new title-holder.