Edgar “The Chosen One” Berlanga And Top Rank Boxing Part! 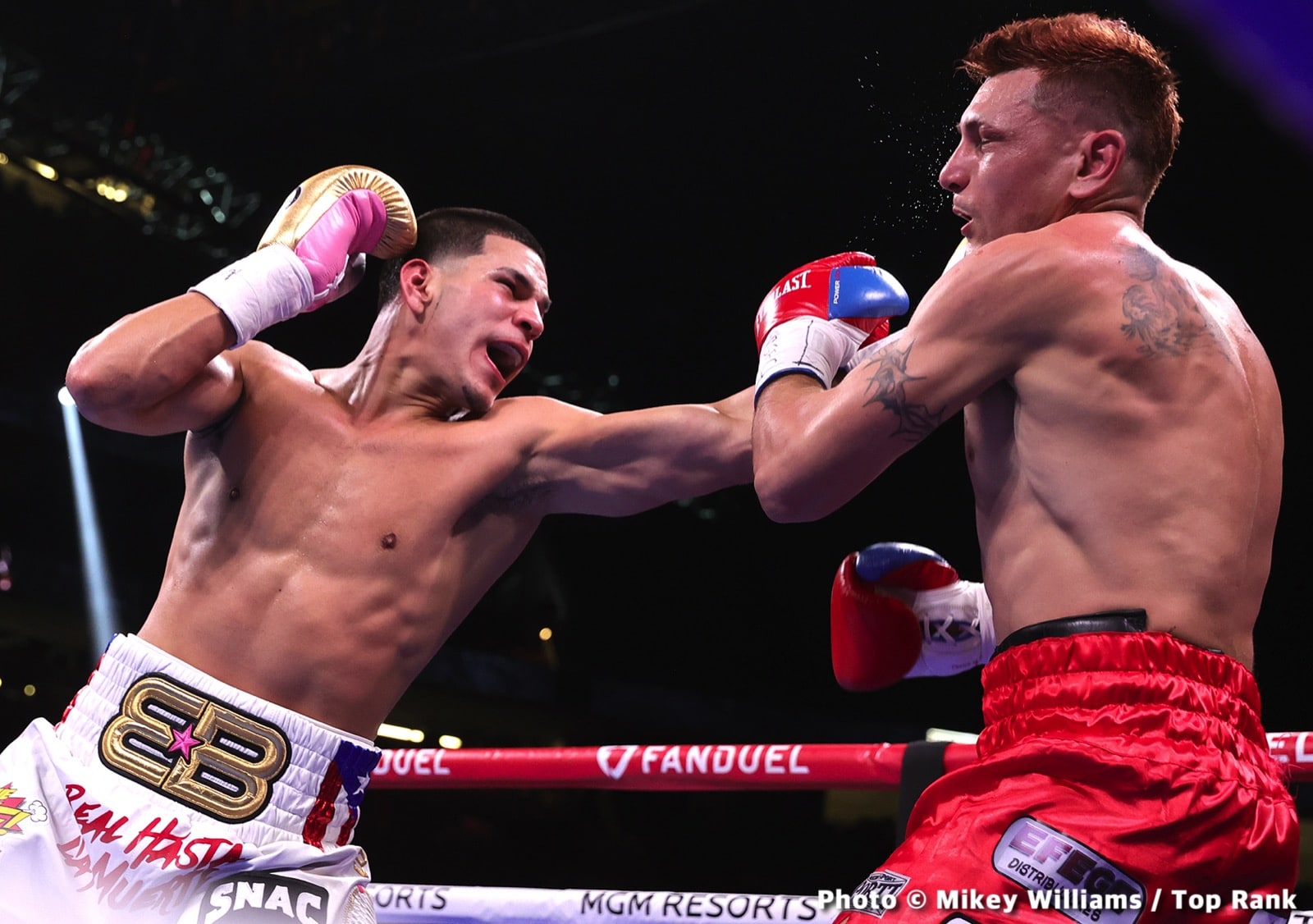 By Ken Hissner: WBA, WBO, and IBF Ranked No. 4, and WBC Ranked No. 12 Super Middleweight Edgar “The Chosen One” Berlanga and Bob Arum’s Top Rank Boxing have parted ways!

After a start of winning sixteen straight knockouts, Berlanga has won his last four fights by decision having a 20-0 record with 16 knockouts now.

“We have mutually decided to part ways, and we wish him the best of luck in the future,” Top Rank spokesman Evan Corn said.

Berlanga holds the WBO NABO Super Middleweight title that he won that was vacant in October of 1921, defeating WBA Fedebol champion Argentina’s Marcelo “El Terrible” Caceres, 30-2-1, over ten rounds at the T-Mobile Arena in Las Vegas, Nevada. Berlanga was knocked down in the ninth round winning by 96-93 on all scorecards.

In March of 2022, Berlanga defended his WBO NABO title defeating Steve Rolls, 21-1, of Canada by decision over ten rounds at Madison Square Garden in New York. Rolls’ only previous loss was to IBF and WBA Middleweight World champion Gennadiy “GGG” Golovin by stoppage in 2019. Scores were 97-93 twice and 96-94.

In Berlanga’s last fight in June of 2022, he defeated Colombia’s Roamer Alexis Angulo, 27-2, out of Dominican Republic over ten rounds at the Hulu Theater, Madison Square Garden, New York.

Scores were 98-92 and 99-91 twice. He drew a six-month suspension and a $10,000 fine from the New York State Commission for attempting to bite Angulo during the bout and joking about it during his post-fight interview.

Berlanga apologized for the incident and did not try to appeal the suspension. It ended on December 11th, and Top Rank and Connolly could not come to an agreement on what the next move should be for Berlanga’s career.

Top Rank and Berlanga’s manager Keith Connolly, have been at odds over the direction of his career and the value of his bouts. The irreconcilable differences resulted in the separation.

“I’m officially a free agent,” said Berlanga. “I want to thank Top Rank, Bob Arum, and ESPN for the last few years. I’m excited for the future and will be waiting for my manager to tell me what the next move is.

“I’ve sold out the theater at Madison Square Garden. I’ve set a goal for myself to sell out the big room at MSG and throw the biggest party at the Garden that Puerto Rico fans have ever seen. I can’t wait for the future.”

Berlanga, the 25-year old-Puerto Rican from Brooklyn, New York, with sixteen first round knockouts and was the hottest prospect in boxing. As the KO streak went on, he received enormous hype from Top Rank and ESPN, its broadcast partner.

But as Berlanga stepped up his opposition over his past four fights, he has either gone the eight or ten round distance and suffered his first knockdown of his career in the ninth round against former world title challenger Marcelo Coceres on the Tyson Fury-Deontay Wilder III card in 2021.

Berlanga was 9-0 when Top Rank signed him in 2019 and put him on the Terence “Bud” Crawford-Amir Kahn undercard at Madison Square Garden, and as he continued scoring first round knockouts, he began attracting more and more fans to his fights, especially from the Puerto Rican community.