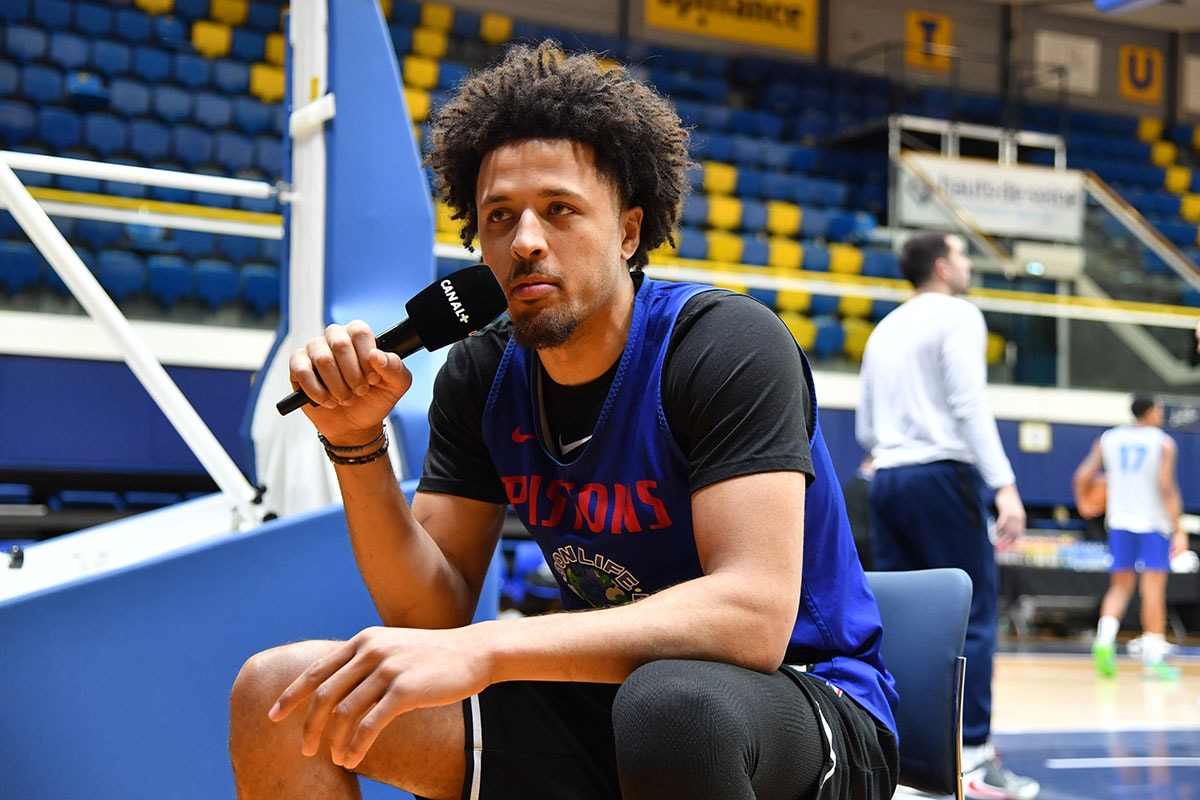 The future for Cade Cunningham and how the future Pistons backcourt shapes up gets the ball rolling in this week’s edition of Pistons Mailbag.

Darrell (Detroit): Three questions: Should the Pistons consider extending Hami now rather than try to re-sign him as an unrestricted free agent in the summer? If Killian Hayes continues to play lights out on both ends does he start alongside Cade next season? Lastly, it appears Saddiq Bey performs extremely better as a starting power forward. Could he have been the answer to that spot all along?

Langlois: Three answers: They can’t extend Hamidou Diallo. Only contracts of three years or more can be extended and Diallo signed a two-year deal in the summer of 2021 when he was a restricted free agent. Diallo will be an unrestricted free agent come July with the Pistons holding Bird rights. As for who starts next to Cunningham, it’s not inconceivable that all three of Hayes, Cunningham and Jaden Ivey could start. Cunningham has the size to guard most wing players and so does Hayes, for that matter. Ivey’s size and athleticism would still enable a switching defensive scheme. But there’s also a second unit to consider and chances are Casey would want one of those three as a central figure off the bench. The considerations would be more than who’s playing better, Ivey or Hayes. It would be a combination of who complements Cunningham and the first unit better and who’s better equipped to serve as point guard off the bench? And, finally, I don’t know that we can conclusively say Bey needs to start at power forward to be his best. I think he plays better when he gets more run for him and sometimes goes quiet when one or two others are cooking and the offense runs through them instead of him. That’s pretty normal for young players. It sure seems like the Pistons are intent on fully exploring the Jalen Duren-Isaiah Stewart pairing to give them more size and a better defensive foundation. Stewart seems like the bet to be the fixture at power forward with the starters as the roster is currently constructed, but that’s certainly subject to change and Bey could force the issue.

Langlois: Here’s part of what Cunningham said to The Athletic from Paris: “The thought of putting a foreign object, a big ol’ rod, in my leg, it scared me a little bit.” Yes, it seems they did insert a rod in Cunningham’s leg, but that was one of the likeliest outcomes based on cursory review of the treatment options when his condition was announced. Sometimes rods are inserted with the idea they’ll be removed after healing is completed, but often rods are meant to be permanently inserted. There hasn’t been anything to indicate which is the case with Cunningham’s.

@PistonsBlog: What is the justification for Troy Weaver and the Pistons to continue wasting a two-way roster spot on Buddy Boeheim? He is a non-prospect who couldn’t even break the starting lineup for the G League Cruise.

Langlois: Boeheim showed in the Big East that he could be a high-volume and above-average 3-point shooter even when the scouting report had him as the No. 1 target of defenses. That seems justification enough to sign someone to a two-way contract in this day and age. As of Friday, two-way contracts become fully guaranteed for the season. Boeheim is playing 24 minutes a game, taking 80 percent of his shots from the 3-point arc (11 attempts per 40 minutes) and making them at a 36 percent clip. That’s pretty good for a first-year player. I wouldn’t write him off as a non-prospect just yet.

Sharon (Southfield, Mich.): The Pistons are currently one of the worst defensive teams in the NBA. What is Dwane Casey or Troy Weaver going to do to address it or will they just let the young kids learn on the fly? Could they possibly hire a defensive specialist coach to whip them into shape?

Langlois: Indeed, the Pistons currently rank 29th in defense. You know who ranks 30th? The San Antonio Spurs, coached by the guy universally acclaimed as one of the greatest coaches in basketball history, Gregg Popovich. Defense is hard in a league where the skill level has never been higher and there has never been an era where more square feet of the court require defending. And San Antonio is last in defense despite having Jakob Poeltl, a seven-year veteran considered one of the NBA’s top defensive big men, as its center. The center quarterbacks the defense, directs traffic and must be an effective communicator in addition to providing rim protection. Today’s centers have to defend scores of pick-and-roll plays in every game and each game comes with its own set of guidelines and principles tailored to the opponent’s personnel. The Pistons have the NBA’s youngest player, Jalen Duren, as their starting center. When he’s not playing that spot, 21-year-old Isaiah Stewart is. The Pistons are banking on Duren and Stewart to be the backbone of a stout defense in the years ahead, but, yeah, they very much are learning on the fly, as you put it, in the present. Dwane Casey’s assistant coach in charge of defensive game planning is Jerome Allen, who is highly regarded and mentioned as a future head coach. The Pistons start four players 21 or younger and they don’t have a fifth starter who would fit in that category, Cade Cunningham, one of their best and most intuitive defenders. They’ve also just got Isaiah Livers, their best perimeter defender, back after a 20-game absence. Young teams almost always struggle defensively, so it was always going to be a challenge at that end for this year’s Pistons. The numerous key injuries have only compounded that challenge. The good news? A year’s experience and reasonably good luck with health should go a long way toward seeing them rise up the rankings by this time next season.

@BadNewsBeau: How can so many guys be having individual success and the team not meet expectations?

Langlois: It’s all relative. Jaden Ivey and Jalen Duren are having individual success for NBA rookies and what they’ve shown bodes well for the Pistons future, but measuring them in a vacuum and measuring them against NBA veterans are very different assessments. I know I’ve used this often, but it bears repeating whenever questions arise about the Pistons and “expectations.” The Pistons are starting four players 21 or younger, which makes them young for the Big Ten, never mind the NBA. That’s no exaggeration. Many Big Ten teams, including both in Michigan, start more players older than 21 than the Pistons. The age very much matters. We see that in the G League, too, where the G League ignite – young players augmented by a handful of players with significant NBA experience – struggle to win games against more veteran G League teams. Scoot Henderson is projected to be the No. 2 pick and would be No. 1 in years without a transcendent prospect like Victor Wembanyama in the field, but despite Henderson’s strong resume the Ignite are below .500. Experience very much matters, less for physical maturity (though that’s not nothing) than for accumulating the repetitions that form instincts, for skills development to find an NBA sweet spot and for familiarity with NBA personnel.

@LukaKneevi4: Do you think the Pistons got rid of Luka Garza too soon? Seems like he could be a useful big in the NBA. This year it seems he is better on defense with above-average offense as usual.

Langlois: Since drafting Garza and before  free agency when the decision was made to not re-sign him, the Pistons traded for Marvin Bagley III and drafted Jalen Duren. They already had Isaiah Stewart. That’s three young big men ahead of Garza. Even if Stewart and Bagley both have the ability to play power forward, the fact is they’d both be used as centers before Garza. So Garza was going to be no better than No. 4 on the depth chart at center and, really, No. 5 at the time free agency hit and the Pistons still had Kelly Olynyk on the roster – he wasn’t traded until late September for Bojan Bogdanovic – and No. 6 after Nerlens Noel had been added in trade. It would have made the roster construction decided lopsided, which in itself isn’t disqualifying for a rebuilding team but would have left the Pistons perilously thin elsewhere. As it turns out, Garza, who at 24 is older than Bagley, probably would have gotten some minutes over the past week or two when Duren, Stewart, Bagley and Noel all missed time. Garza has played 112 minutes over 14 games with Minnesota and is scoring a little more efficiently than he did with the Pistons. If he evolves into a 40 percent 3-point shooter on relatively high volume, he might find a niche in the NBA. Defense continues to be his biggest challenge and was the reason he was still available with the 52nd pick as the national college Player of the Year.