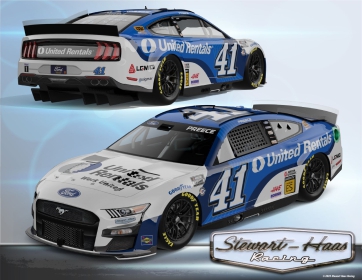 ●  United Rentals, Inc. (NYSE: URI), the largest equipment rental company in the world, is serving as the primary sponsor of Ryan Preece and the No. 41 team of Stewart-Haas Racing (SHR) for select NASCAR Cup Series races in 2023, beginning with the Busch Light Clash at The Coliseum Feb. 4-5 at the Los Angeles Memorial Coliseum. United Rentals has an integrated network of 1,449 rental locations in North America, 13 in Europe, 27 in Australia and 19 in New Zealand. In North America, the company operates in 49 states and every Canadian province. The company’s approximately 24,700 employees serve construction and industrial customers, utilities, municipalities, homeowners and others. The company offers approximately 4,700 classes of equipment for rent with a total original cost of $19.3 billion. United Rentals is a member of the Standard & Poor’s 500 Index, the Barron’s 400 Index and the Russell 3000 Index® and is headquartered in Stamford, Connecticut. Additional information about United Rentals is available at UnitedRentals.com.

●  Perseverance has paid off for Preece. SHR promoted the 32-year-old racer from Berlin, Connecticut, from his reserve driver role with the organization to the NASCAR Cup Series in 2023 where he will drive the team’s No. 41 Ford Mustang. Preece had spent 2022 performing simulator work while running a mix of races across each of NASCAR’s top-three national touring series – Cup, Xfinity and Truck – a schedule punctuated by a Truck Series win from the pole June 24 at Nashville (Tenn.) Superspeedway, his second straight at the 1.333-mile oval near Music City.

●  One of the NASCAR Cup Series races Preece ran last year was the Busch Light Clash at The Coliseum. Preece drove for Rick Ware Racing and advanced into the 150-lap main event. It was a herculean effort for the small team, and Preece played a key role even from outside of the racecar. To simply have a car ready for the race, Preece worked side-by-side with his mechanics in the days and nights leading into The Clash building the racecar, a rarity in the ultra-specialized world of NASCAR’s premier division.

●  Preece made a name for himself on the NASCAR Whelen Modified Tour – NASCAR’s oldest division and the only open-wheel series sanctioned by NASCAR. Preece won the Tour championship in 2013 and worked hard to leverage that title into additional opportunities in the Xfinity Series – NASCAR’s stepping-stone division to the elite Cup Series. After spending all of 2016 in a scrappy effort with an underfunded team that delivered a best finish of 10th, Preece mortgaged his house to secure two races with Joe Gibbs Racing (JGR) in 2017. In equipment finally befitting his talent, Preece finished second in his JGR debut at New Hampshire Motor Speedway in Loudon and then won in his very next start at Iowa Speedway in Newton. In his next five Xfinity Series starts, Preece never finished outside of the top-10, a run capped with a second victory in April 2018 at Bristol (Tenn.) Motor Speedway.

●  The NASCAR Whelen Modified Tour is filled with short tracks, so competing at a quarter-mile oval – the shortest track the NASCAR Cup Series will compete on in 2023 – is nothing new for Preece. That experience will prove incredibly useful because only 27 cars can line up for the 150-lap feature. Getting to the main event is a process. Here’s how it works…

●  On Saturday, Feb. 4, NASCAR Cup Series competitors will take to the track for practice prior to single-car qualifying to determine the starting order for four heat races. On Sunday, Feb. 5, on-track action will begin with four, 25-lap heat races consisting of 10 cars each. Below is a breakdown on how the heat races will be filled out:

●  The top-four fastest qualifiers from Saturday’s single-car qualifying session will be on the pole for each heat race, while cars that qualified fifth through eighth will make up the other half of the front row in each heat.

●  The winners of heats three and four will fill out the second row, with the remaining order being determined in the same manner.

●  The remaining finishing positions from each heat that did not advance will continue to one of two 50-lap Last Chance Qualifying (LCQ) races. Below is a breakdown on how the LCQ will be filled out:

●  The starting order for these two events will be determined based on finishing positions in the heat races.

●  Those who did not advance from heats one and three will make up the first LCQ race. The second race will be made up of those from heats two and four.

●  This pattern will continue to fill out the remaining cars in each LCQ.

●  The top-three finishers (six total cars) from both LCQ races will advance to the Busch Light Clash, filling out positions 21-26 of the 27 available positions.

●  The final spot in the Busch Light Clash will be reserved for the driver who finished the highest in the 2022 points standings who does not transfer on finishing position in their heat race or in their LCQ race.

●  All other drivers will be eliminated from competition for the remainder of the event weekend.