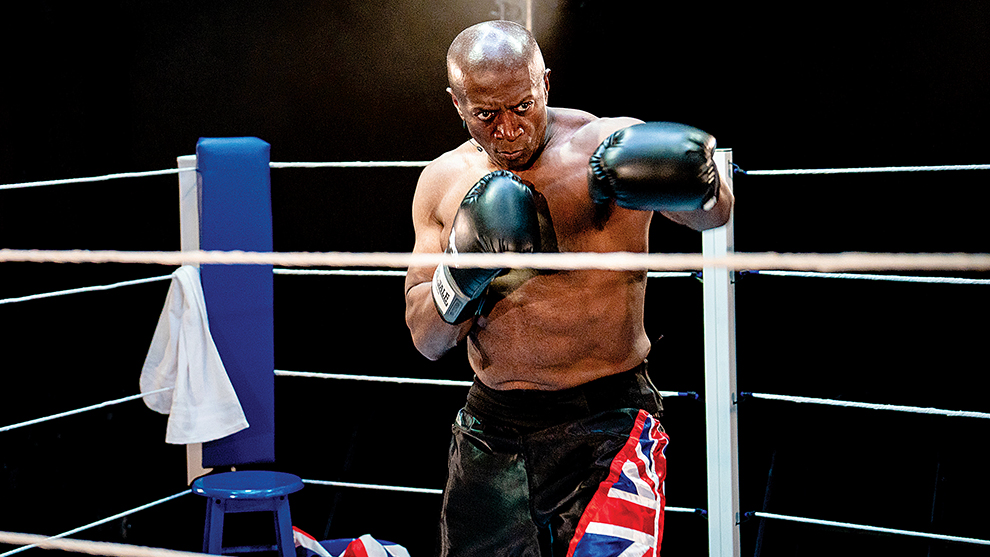 I WAS pleased to start 2023 by discovering that there was a play called On the Ropes showing at the Park Theatre in North London. The production is the biographical tale of Vernon Vanriel, the maverick light-welterweight boxer from Tottenham who was popular in the 1970s and 80s, for his unorthodox fighting style, but who became better known for a treacherous period in his life as a victim of the Windrush scandal caused by the government’s much-maligned ‘hostile environment’ policy.

Despite living in in the UK from the age of six, Vernon was denied entrance into the country after returning from a trip to Jamaica, unaware that being outside the UK for two years or more continuous years meant he would lose his right to remain indefinitely. That ruling rendered him virtually stateless for 13 years and led him to homelessness, destitution and despair, all while praying for a route back to his beloved North London. In 2005, I attended a get together at a wine bar to give Vernon a ‘send- off’ for that trip to Jamaica. No one there could have predicted the fate that awaited him, least of all Vernon himself.

Vernon Vanriel was a name that I was drawn to when I started my professional career in 1984. At first part of the charm was merely that he shared his first name with my older brother. I’d never heard of anyone else called Vernon. I knew little about him apart from the information I gleaned from the fight posters that were plastered all over the walls, upstairs in the Mason Arms pub, where I trained. He had a decent record, contested the Southern Area title and evidently had faced some good domestic names. I know now that he rose as high as number two in Britain.

I assumed he was from Jamaica or his parents were, like mine. That was a fairly safe assumption to make in the early 1980s. His fight moniker, “The Entertainer”, was unusual. It was a contrast from the well-trodden ‘bomber’, ‘dangerous’ and ‘lethal’ nicknames and prefixes that were used. Vernon’s suggested that he was flamboyant, possibly a bit flash and different from the orthodoxy of British boxing at the time, which preferred straightforward over the mercurial. That appealed to me straight away. As a young heavyweight without serious promotional clout, I felt that I needed extra ingredients on top of what was already in the division to have any chance of making an impact.

From those posters I also learnt that Vernon had featured on several shows at the Royal Albert Hall. The Albert Hall was the mecca for big time British boxing throughout the 1970s and 80s. It had a sense of jubilee, which made it feel magical and mystical. I yearned to fight there, just like Vernon and other top British fighters. A few years later I would top the bill there.

I never got to see Vernon fight live. Our careers overlapped; mine just starting and his finishing a year after I turned professional, but we did meet at the Thomas A Beckett on the Old Kent Road, in 1985. He was shadow boxing in the ring when I entered the gym and it was totally different to what I had seen encouraged in the gyms I’d been in. He was only focused on elusiveness – feinting, darting in and out, using the four corners of the ring, while anticipating and evading imaginary punches. He was more Wilfred Benitez than Dave “Boy” Green.

Vernon’s talent was obvious, but it was easy to envision how he might have fallen foul of promoters who favoured honest crowd-friendly boxers and British trainers who would discourage boxing that way – probably because they couldn’t make sense of it. If we’re being completely honest, slick black fighters in Britain at that time were viewed as unsellable passion killers. Yes, people saw the uniqueness and brilliance in Kirkland Laing’s eccentricities, they might even have cheered as they watched him bamboozle Roberto Duran, but they weren’t going to rush to buy tickets to watch him.

I always had a feeling early in my career that trying different things in training and being a little more unpredictable in the ring, was an affront to trainers here. They wanted you to conform to the customs and norm of being a traditional British fighter as much as they wanted to teach you.

At that point I hadn’t met or seen a black boxer in the UK who was comfortable laying his whole personality on the line like Vernon was. Lloyd Honeyghan was another but he came a little later. He also had a similar flashiness, but his energy was different from Vernon’s, it wasn’t about charm and entertaining crowds, it was marked by vexation and a viciousness. Lloyd sent a clear message that he wasn’t to be messed with, inside or outside of the ring.

Generally though, black boxers didn’t tend to colour outside of the lines in case they were tagged as disrespectful, arrogant, or difficult and blackballed (excuse the pun) on the UK scene. It’s ironic that nowadays coming across this way is almost requisite for selling fights.

Is it fair to suggest that Frank Bruno’s popularity would never have reached the frenzied levels that it did if he had been contentious, arrogant or confrontational? Maybe that just wasn’t in Frank’s make up, but his somewhat passive public behaviour was reflective of how black people at large functioned in wider society at that time. It was head down and crack on. The subliminal instructions handed down from your parents in getting on in a society that was largely white and often patently hostile were, ‘don’t say too much’, ‘don’t make anyone feel uncomfortable’, and ‘don’t bring trouble to my door’.

I had heard it said that Vernon was too brash with a lot to say for himself, which had rubbed the boxing establishment up the wrong way and impeded his career. The establishment at the time was ostensibly ‘the cartel’, the infamous trio of Jarvis Astaire, Mickey Duff and Mike Barrett, underpinned by Lawless and his enviable stable of the best of breed British boxers.

When Vernon labelled promoters a ‘corrupt cartel’ in an interview with [i]Boxing News[i] in 1982, he all but killed his chances of challenging for the British title or making a further impact in the sport.

A quote from that interview read: “The men in dinner jackets and in the audience paying big money were all white professional people. And us boys in the ring were working class. Some white, some black, but we were all working class. So it wasn’t all racism. It was class.”

It rings with truth. Terry Lawless let him go almost immediately and Vernon has stated that Lawless used his considerable influence to get him blacklisted with other promoters. This wasn’t a message that could be tolerated from a young black boxer, who was also seen as a bit gobby.

Vernon continues to stand behind what he said about promoters. Anyway, it is undeniably true, the model boxing promoters use is still based on exploitation, and that’s not changing any time soon. No matter how many interviews they do on social media to talk about their fighters, they ultimately see boxers as an servant class when they agree to be on a show, or sign a contract with them. They  should have few qualms about being consigned to the bin when they lose value.

I once thought Vernon Vanriel was an intriguing name on a poster and then when I met him, I found him to be a charismatic guy who could really box, but now I know he was an activist. Activism often involves sacrifice for a cause and he sacrificed himself to shine a light on how young men in this sport were treated by its money men. Now, at the age of 67, back in North London since 2018, Vernon continues his activism and suggested in the a recent interview with the Guardian that he has one more fight on his agenda. “I want to beat the government, I want them to admit what they do is wrong.”

*** In collaboration with Wayne Cyrus ***