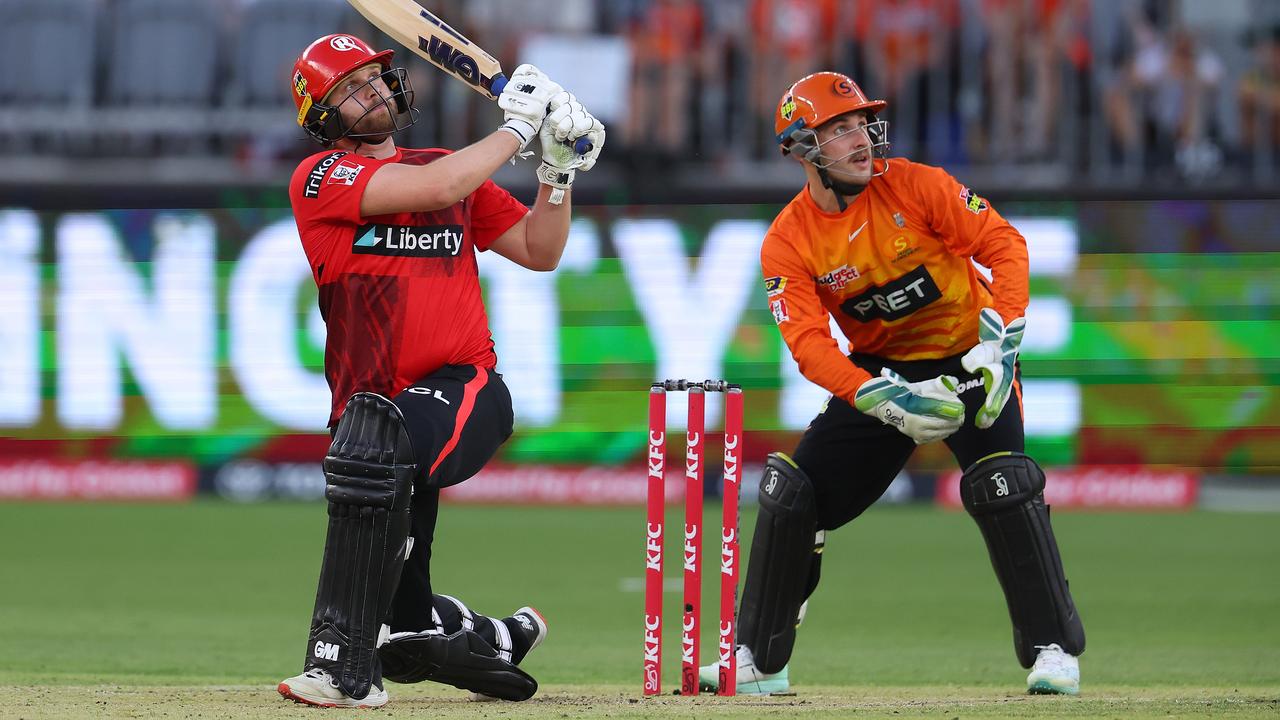 The Perth Scorchers have booked themselves the home Qualifier final with a thrilling 10-run victory over the Melbourne Renegades.

Securing a remarkable fifth BBL top of the table finish in the process, Perth’s win has been soured by a freak injury to paceman Matt Kelly, who left the field dazed and bloodied after copping a ball to the face.

The horror moment came late in the match when the ball took a deflectiomoodyn off Renegades’ skipper Aaron Finch’s bat at the non strikers end and slammed into a “blindsided” Kelly’s face.

The Scorchers star immediately collapsed with medical staff quickly to his aid.

“He hasn’t been taken to hospital but he’s in good spirits.”

Kelly wasn’t the only Scorcher to cop a nasty blow in the field, with Andrew Tye dropping a catch and the ball landing on his face to leave him with a cut on his nose.

Knowing a win would seal hosting rights for next Friday’s blockbuster, the Scorchers were on from the first ball as they put finals’ hopefuls Melbourne to the sword by posting 5-212.

And their innings wasn’t without controversy as David Moody was “red carded” and taken out of the attack for bowling two above waist beamers in the same over.

Cam Bancroft continued his rich vein of form with an unbeaten 95 not out off just 50 balls in a remarkable innings that included five fours and six sixes.

And while Shaun Marsh (54 off 34 balls) did his best against his former side, the Renegades couldn’t recover – despite the best efforts of Aaron Finch (76* off 35 balls).

The Melbourne outfit still have the chance to scrape into finals with victory over the Adelaide Strikers on Tuesday.

The Scorchers got off to a flyer, belting a staggering 62 runs from the powerplay as Renegades seamer David Moody was taken out of the bowling attack after two waist-high full tosses.

Perth opener Stephen Eskinazi smashed 10 runs off Tom Rogers’ first over, before Moody marked his run-up — hoping to swing momentum back into his team’s favour.

Moody’s first ball was a dot but his next was a beamer which went like a tracer bullet into Cameron Bancroft’s ribs — and the former Test opener crumbled to the ground after completing the run.

Moody then bowled a wide off the free-hit, before delivering yet another beamer to Eskinazi who scooped the delivery for four.

After his four deliveries, all of which were clocked over 140kmph, the 27-year-old had to hand the ball to Jack Prestwidge who also was belted for a six from his first delivery.

Mark Waugh added: “Obviously no means to do that, so it’s very unfortunate.

“He could’ve been a handful on this pitch. A big guy at good pace.”

Waugh added: “Now they’re a bowler short. You have your big team talk, you go out there all keen, ‘boys let’s do the basics well’ – and it couldn’t go any worse for the Renegades early on.”

All-rounder Will Sutherland was then tasked with stemming the flow of runs before Eskinazi belted a staggering 17 runs off his over, with two fours and a six.

Off-spinner Corey Rocchiccioli bowled the fourth and final over of the power play and was also dispatched, conceding 19 runs including two sixes and a four.

Renegades all-rounder Will Sutherland delivered one of the catches of the BBL with a diving effort to dismiss Nick Hobson and leave Perth 5-160.

Fox Cricket’s commentators were stunned as the tall Victorian was able to reel a ball which looked certain to fly over high head.

“What an effort that is, the Chief Sutherland somehow gets basutherlck and throws a big paw up,” Fox Cricket’s Mark Howard said.

“Somehow gets back, and that is one of the catches of the summer, Hobson can’t believe it.”

But the Scorchers managed to continue to pile on the runs and set Melbourne 213 for victory.

Shaun Marsh had put his former side Perth to the sword in his first game back from injury, blasting his fastest BBL half century.

The 39-year-old, who has been sorely missed by the Renegades since aggravating a hamstring injury, was on from the first ball as he sent Jason Behrendorff to the boundary three times in the opening over.

And he just powered on from there, gifted by a life from young Cooper Connolly on 32.

“The young fella will be disappointed. He’s a live one in the field too, very energetic.”

“He’d be so disappointed.”

Marsh showed age is no barrier as he continued to pile on the pain on the Scorchers, and brought up his 50 off just 26 balls.

“His third 50 at this venue and a welcome return to the Big Bash,” Gilchrist praised.

“These are the quality players you want featuring in this tournament.

“He just does it with ease, doesn’t try to get too complicated with his batting.

“He’s quick to latch onto anything too loose.

“A really nice welcome back for Shaun Marsh.”

But as Marsh continued to motor at one end, the Renegades couldn’t find someone to go with him.

And when he fell chopping on David Payne while trying to lift the run rate, chasing a massive 213, Melbourne’s hopes started to deflate.

Finch fired late to give the Gades a late chance, but couldn’t reel in the 29 runs off the final over to steal victory.

Get all the latest cricket news, highlights and analysis delivered straight to your inbox with Fox Sports Sportmail. Sign up now!!!

Catch all the action below in our live blog, if you can’t see it click here!