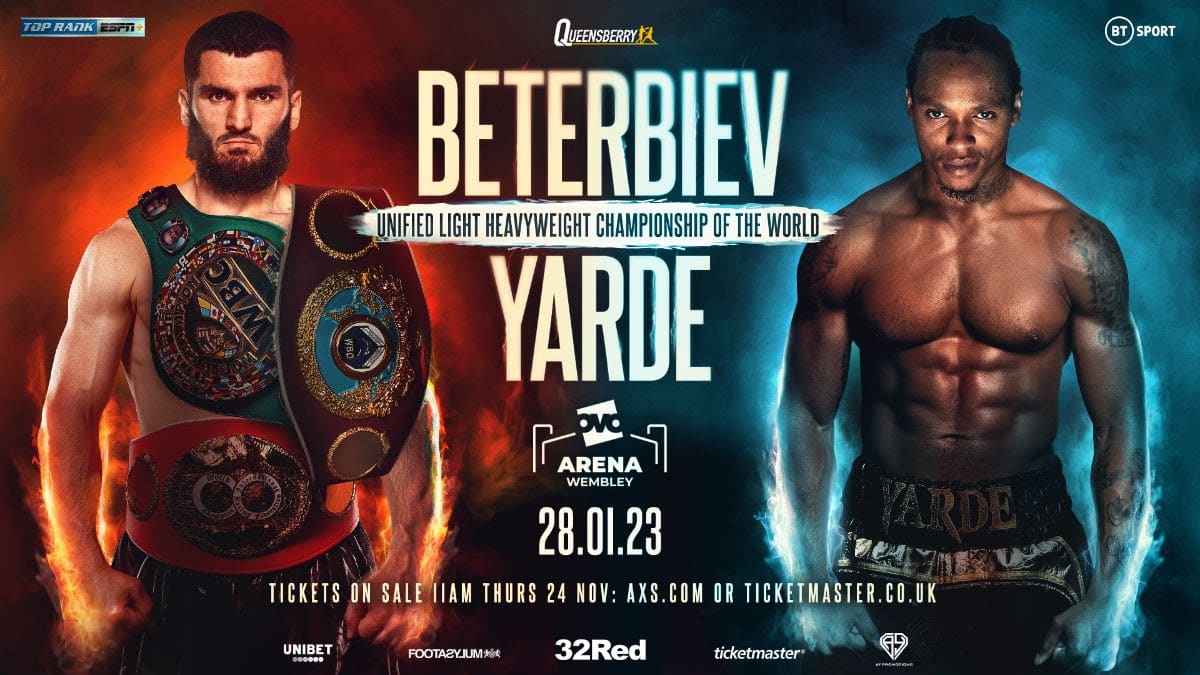 By Sam Volz: Promoter Frank Warren believes Anthony Yarde has what it takes to defeat IBF/WBC/WBO light heavyweight champion Artur Beterbiev next Saturday on January 28th, at the OVO Arena in London, England. Beterbiev-Yarde  event will start at 2:00 p.m. ET on ESPN+.

Few boxing are giving the WBO mandatory Yarde (23-2, 22 KOs) after having seen him beaten by a shot Sergey Kovalev in 2019 and a very average domestic-level fighter Lyndon Arthur in 2020.

The 31-year-old Yarde stands in the way of the undisputed championship fight between Beterbiev and WBA champion Dmitry Bivol.

If Yarde pulls off an upset with Beterbiev, no one will take seriously a fight between him and Bivol because of the difference in boxing skills. Bivol would embarrass Yarde and make him look worse than he did Canelo Alvarez & Gilberto ‘Zurdo’ Ramirez.

Yarde hasn’t fought the kind of competition that would give one a sign that he’s improved since a badly faded Kovalev knocked him out.

If Yarde had some notable wins on his resume, it would be feasible that he could upturn the applecart and wreck the undisputed championship fight between Beterbiev and Bivol, but alas, he’s beaten absolutely no one that you can count as a quality fighter.

“He’s a wrecking machine. He’s got the most perfect record of anybody in boxing, a champion in boxing,” said Frank Warren to BT Sport about IBF/WBC/WBO light heavyweight champion Artur Beterbiev.

“It is a tough fight for our man, but I think this may be his moment,” Warren said about Anthony Yarde. “He can punch, he can box; we’ve seen that. He’s got a little bit of experience more. I generally do feel he can upset the odds.

“He did it too late,” said Warren about Yarde hurting Kovalev late in the fight. “He should have been putting it on him earlier in the fight, and he didn’t do that. If he had imposed himself, he would have knocked him over.

“He does; he can do that,” Warren said about Yarde being able to knock anybody out.”The only other loss on his record was that points decision when he had that bad period during Covid.

“It was a terrible time for him. He lost three members of his family due to Covid. That took a lot out of him. He showed what he’s all about in the rematch with Lyndon Arthur when he totally destroyed Lyndon.

“Fingers crossed. Hopefully, we got the timing right on this. He’s had the run-out, and now it’s up to him. It’s now his to go and win. When he gets in that ring, he’s got to show everyone that he’s capable. I think he’s capable of doing it.

“They will get behind him,” Warren said about the OVO Arena crowd supporting Yarde on Saturday. “I don’t think he [Beterbiev] will be overlooking Anthony.

“We made the fight with Bob Arum, who is the joint promoter with us, and they do fancy their man strong, but I also fancy our man. So it’s going to be quite interesting.

“Look, we know what he is. He is a monster, but our guy is too, and if he catches you, you go. We know he got put on the floor by Callum Johnson,” Warren said about Beterbiev being dropped by Johnson. “We know he can be caught, and the difference often comes with a big puncher. But our guy is a more powerful puncher,” said Warren.