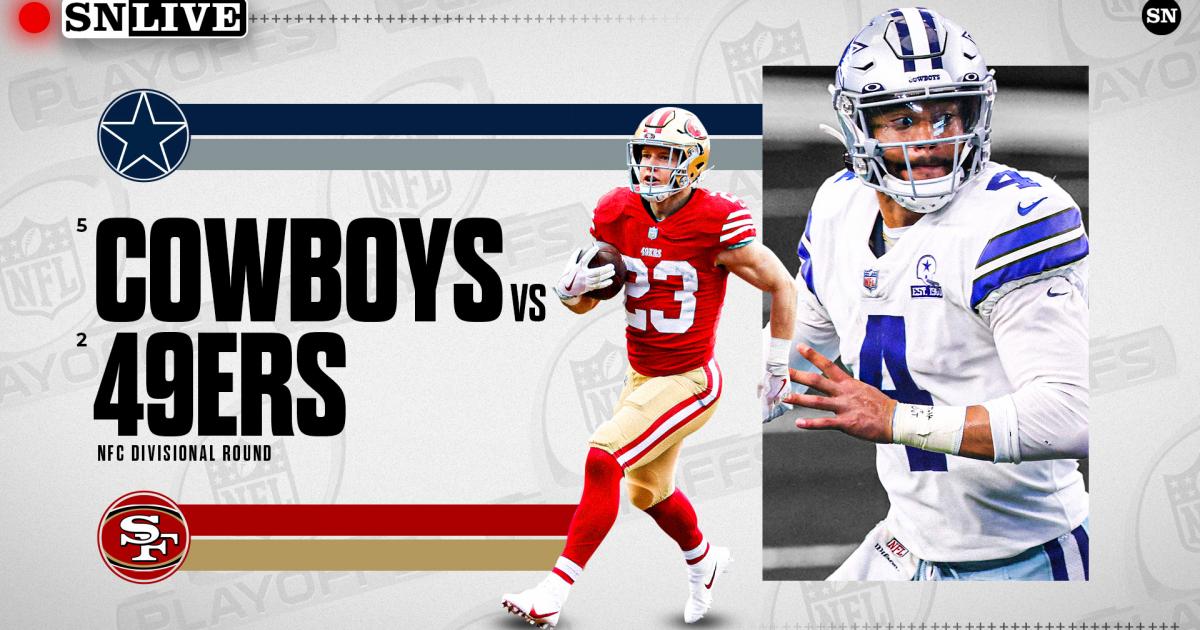 One of football’s great rivalries will be rekindled on Sunday, this time with a spot in the NFC championship on the line.

The Cowboys (13-5) exorcised a few of their playoff demons in their wild card drubbing of the Buccaneers, a game in which starting quarterback Dak Prescott was, for the most part, flawless.

San Francisco has real Super Bowl hopes and the sort of loaded roster capable of getting the job done. Brock Purdy’s been a force, the defense is as stout as they come, and did we mention they have Deebo Samuel and Christian McCaffrey, two of the most difficult covers in the league?

Things are looking up for San Fran, both in the present and in the future. What better way to prove it than beating its long-time NFC rivals — a team that shares its status as one of the league’s most iconic brands.

The Sporting News is tracking live updates the NFC divisional matchup between the Cowboys and 49ers. Below are highlights and results from Sunday’s game at Levi’s Stadium.

7:48 p.m.: FIRST DOWN! Prescott tucks it and runs on first, getting the first down in the process. The gamble pays off for McCarthy and the Cowboys.

7:45 p.m.: Great tackle by Greenlaw, who redeems himself by ripping Pollard to the turf in the open field. Dallas has a decision to make on fourth-and-four: go for it or give Maher a chance to kick the long-range field goal.

7:41 p.m.: Some more laundry on the field after Dre Greenlaw rams into Elliott as he head out of bounds. Unnecessary roughness will take the ball into San Francisco’s territory.

7:37 p.m.: FIELD GOAL! Gould is about as reliable as they come. And he keeps the good times rolling, finding the target from 47 yards out.

7:31 p.m.: Silly flag by Bland, who tosses Jauan Jennings into the sidelines after he gives up the catch, drawing an unnecessary roughness flag. That will take the ball into Dallas’ side of the field.

7:30 p.m.: Samuel makes a man miss on the screen before going down a couple yards short of the first down line. Will set up a third-and-short.

7:28 p.m.: McCaffrey carves a lane out in the slot before fielding a pass from Purdy, getting stopped right at the marker. That’s a first down…just barely.

7:22 p.m.: TOUCHDOWN! Prescott made San Fran fear the run after trotting down the field to make it first and goal the play before. This time, he pulls it back, tossing the ball to Dalton Schultz to give Dallas the lead.

Dak battles back! TD to Schultz!

Brett Maher — who missed four extra points last week — is headed on the field to kick the PAT. His kick is up and…it’s blocked! Rough time for the kicker.

The @49ers block the extra point!

7:20 p.m.: Faced with a fourth and short, Mike McCarthy opts to hand the ball off to Lamb, who makes Talanoa Hufanga miss to get the ‘Boys into the red zone.

7:19 p.m.: Ezekiel Elliott gets to the first down marker after pushing through the pile on third down.

7:17 p.m.: Dallas needed three yards to gain the first. It got 17, courtesy of a quick pitch-and-catch between Prescott and Brown. Cowboys in Niners’ territory.

7:12 p.m.: Prescott back to work after his pick, hitting Noah Brown and CeeDee Lamb to move the chains.

7:06 p.m.: After a pair of minimal gains, Purdy evades pressure before sailing the ball out of play. Should be a chip shot for Robbie Gould.

7:03 p.m.: After taking a sack on the first play of the possession, Purdy finds Brandon Aiyuk, who expertly shed his marker away to take San Francisco to the Cowboys’ 10.

7:01 p.m.: INTERCEPTION! Dak Prescott was looking for Michael Gallup, who saw his curl route interrupted. Deommodore Lenoir sneaks in front and plucks the ball out the sky, setting the Niners up at Dallas’ 21.

6:57 p.m.: Purdy fires a low pass to McCaffrey that skips into the ground. Looks like the Niners will punt the ball.

6:56 p.m.: Purdy rolls out to the left and looks to have Aiyuk open. However, he wasn’t able to set his feet in time, giving defensive back Daron Bland the opportunity to knock it down. Great recovery by the rookie.

6:50 p.m.: 49ers will start their opening possession inside the 20. Let’s see what Brock Purdy and company can do.

What channel is Cowboys vs. 49ers on today?

Cowboys vs. 49ers will be aired on Fox in the U.S. Kevin Burkhardt (play-by-play), Greg Olsen (analyst) and Erin Andrews (sideline reporter) will handle the coverage from Levi’s Stadium.

For cord cutters, the game will be available on a number of platforms, including the Fox Sports App and fuboTV, which offers a free trial.

Canadian viewers can find Sunday’s matchup on CTV, RDS or DAZN, which airs every game over the course of the season.