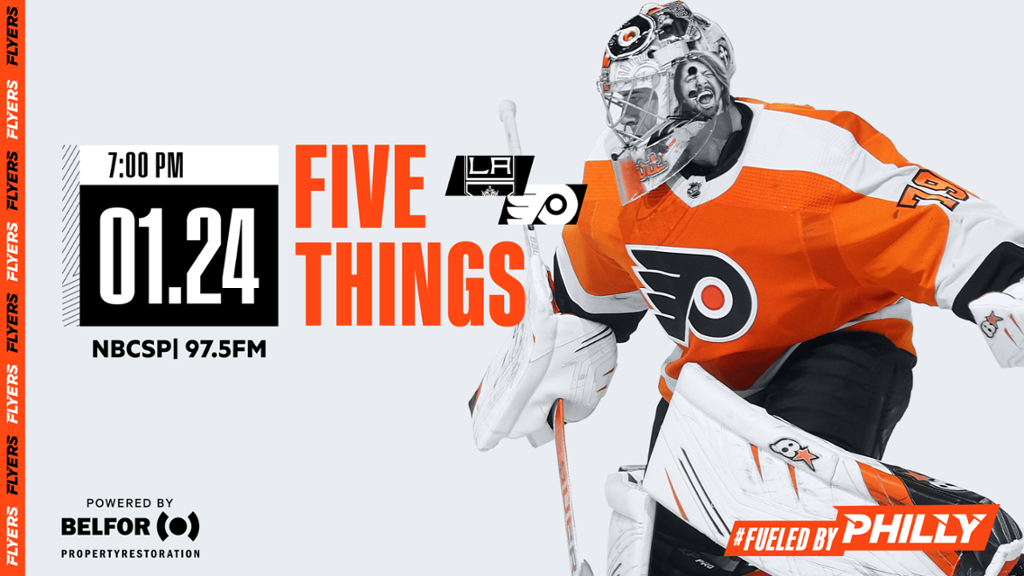 The game will be televised on NBCSP. The radio broadcast is on 97.5 The Fanatic with an online simulcast on Flyers Radio 24/7.

This is the second and final meeting of the season between the teams. and the lone game in Philadelphia. On Dec. 31, the Flyers closed out the 2022 calendar year with a 4-2 win over the Kings at Crypto.com Arena on Saturday afternoon. Philadelphia came back from deficits of 1-0 and 2-0 to forge ahead in the third period.

In the first period, a 5-on-3 power play goal by Adrian Kempe was answered by a 5-on-4 power play marker by Scott Laughton. Less than a minute after the Laughton goal, LA went ahead again on a transition goal by Phillip Danault. While the first period was filled with penalties and special teams play, the second period was tighter-checking and faster moving. Owen Tippett forged a 2-2 tie at 9:02. At 13:01 of the third period, a seeing-eye shorthanded goal by Noah Cates put the Flyers ahead, 3-2. Travis Konecny added an empty net goal. Samuel Ersson stopped 27 of 29 shots.Ersson stopped each of the final 20 shots he faced including several tough chances. Jonathan Quick stopped 19 of 22 shots in taking the loss.

The Flyers enter Tuesday’s game coming off a resilient but ultimately frustrating 5-3 loss to the Winnipeg Jets at the Wells Fargo Center on Sunday evening. The Flyers trailed 3-0 by the time the game was 8:31 into the first period. Thereafter, the Flyers chipped away at the deficit. An Ivan Provorov tally (3rd goal of the season) off a nice rush and set-up pass from Tippett got Philly on the board late in the first period. A late-second period power play goal and an early-third period pair of Kevin Hayes 14th and 15th) power play markers — the first from a very sharp angle off a Cates feed and the latter the rebound of a Morgan Frost shot off the pads — tied the game at 3-3.

The Flyers, who went 2-for-4 on the power play and 5-for-5 on the penalty kill against the Jets, killed off a 5-on-3 disadvantage in the third period. All the momentum had shifted to their side. Suddenly, a mostly flubbed Karson Kuhlman shot (Laughton got his stick in to disrupt the shot) rolled off the Jets player’s stick and somehow knuckleballed between the pads of Flyers goalie Felix Sandström at 8:44. The Flyers were unable to capitalize again on a subsequent power play and a late empty-netter from Winnipeg made it a 5-3 final.

Here are five things to watch in this game:

Three of the five non-empty net goals the Jets scored on Sunday were the direct result of misplays by the Flyers. Philly had four skaters below the dots in the offensive zone (Joel Farabee, Cates, Konecny and defenseman Travis Sanheim) and an errant centering pass attempt by Farabee went the other way for a 2-on-1 and a sniper’s goal from Kyle Conner. Shortly thereafter, a scoring chance for Hayes at one end resulted in a 3-on-3 the other way. The defensive play fell apart when Tony DeAngelo chased puck carrier Nikolaj Ehlers all the way behind the net and out the other side (where defensive partner Sanheim initially was right in position to confront Ehlers but backed off with DeAngelo coming around). In the meantime, the left post was unguarded as no one picked up Scheifele. After a pass across, Scheifele had a slam dunk. The final and fatal miscue was Sandström getting fooled by the Kuhlman dribbler than leaked through his pads and into the net.

Winnipeg’s first goal was scored off a deflection. This one was not a misplay by the Flyers but scorer Axel Jonsson-Fjällby was able to get body and stick position needed to tip the puck. That one would fall in the “earned opportunity” and positional jockeying category. Tortorella was unconcerned about the circumstances of that goal because it was not a matter of his team giving away an easy scoring chance or soft goal.

Against the Kings on Tuesday, the Flyers have to do a better overall job of making the Kings earn their scoring chances and eventual goals. Philly can no more afford to give up odd man rushes due to lapses of puck support or take themselves out of position than they can get away with unforced puck errors in dangerous areas of the ice. The Kings have a good team and can keep a goalie busy in their own right without needing to be gifted with prime scoring opportunities.

One of the most frustrating aspects of Sunday’s loss was that the Flyers won both ends of the special teams battles against a Jets team that had come in scorching hot both on the power play and the penalty kill. Finishing the night at plus-two on special teams should have gone a long way toward beating Winnipeg. Unfortunately for the Flyers, they were a combined minus three (+1, -4) at five-on-five and minus one at 6-on-5 with an empty net.

Empty-netter excluded, giving up four goals at even strength can be tough to overcome even when your side comes out ahead in special teams.

Los Angeles is a team that scores a lot of 5-on-five goals (97 GF) but gives up even more (101 GA). After Sunday night, the Flyers dropped to a teamwide minus-10 (87 GF to 97 GA) at five-on-five. Both in Tuesday’s game against LA and moving forward, the Flyers need to inch back to the break-even mark (and then above it) in their five-on-five goal differential if they are to start beating above-median NHL teams with more consistency.

In terms of special teams play, the Kings boast a potent power play (24.4 percent, ranked 10th in the NHL). However, LA is prone to coughing up shorthanded goals — six to date including Cates’ game-winner back on Dec. 31. The Flyers lead the NHL with nine shorthanded goals scored (three apiece by Laughton and Konecny, one apiece for Cates, Sanheim and Rasmus Ristolainen). Overall, the Flyers penalty kill was hot through the season’s first 12 games, went into a six-week free fall, and then has picked up again considerably thereafter. For the season, the Flyers’ PK ranks 19th in the NHL at 77.0 percent.

The Flyers extremely inconsistent power play checks into the game ranked 27th in the NHL at 16.9 percent efficiency (25-for-148). Philly has given up four shorthanded goals, ranking right in the middle of the NHL pack at 16th among the league’s 32 teams. LA has scored two SHGs: one by Trevor Moore and one by Matt Roy.

The Flyers rested Carter Hart on Sunday against Winnipeg because it was the second game of a back-to-back set, the team’s third game in four nights and its fifth in seven nights. Hart got off to a sensational start to the 2022-23 season, going 5-0-1 with a 2.31 GAA and .939 save percentage. Since then, he’s had stretches of inconsistency and dealt with a concussion suffered just before the holiday break. Over November, December and thus far in January, his monthly save percentages have been .900 on the nose or .901 and his monthly GAAs have been in the 3.00 to 3.15 range.

As usual, however, goalie stats are every bit as reflective of team play as individual play. Hart’s January stats are affected by getting pulled midway through the club’s 6-0 debacle in Boston on MLK Day (four goals against on 16 shots) and by the Toronto Maple Leafs strafing Hart for six goals on 35 shots on Jan. 8 in a game where any goalie would have had a rough night given the quality of the chances. Last time out, Hart played brilliantly in carrying a shutout for 59 minutes and making several 10-bell saves among his 30 saves on 31 shots in Saturday’s 2-1 road win in Detroit.

For the last month-plus the Flyers have started the same combination of 12 forwards and six defensemen in every game. The team has compiled a 9-4-0 record over its last 13 games and Tortorella has been mostly satisfied with how the lines have performed. Unsurprisingly, Tortorella said on Tuesday that the starting lines will remain the same against the Kings. The Flyers held a brief, optional morning skate on Tuesday.

There have been periodic tweeks to power play personnel arrangements. Most recently, James van Riemsdyk and Cam York swapped PP units with Farabee and DeAngelo. The Flyers don’t have distinct PP1 and PP2 units per se. In recent games, the unit with Laughton on it has often taken the first shift of a power play with the unit with Hayes taking the second. However, that switch around again last game against Winnipeg on the Flyers’ second, third and fourth power plays. Since Hayes scored goals on Philly’s second and third power plays, the Hayes unit is likely to get the first shift on power plays against the Kings, too.

The Kings, who are 5-5-0 in their last 10 games, are playing their third game in four nights and fourth in six nights (identical to the Flyers, although Philly is in its sixth game in nine night and the Kings enjoyed a four-night hiatus in their schedule between home games on Jan. 14 and 19). Tuesday’s game is the third in a six-game road trip for the Kings that runs through the remainder of January. LA is 1-1-0 thus far on the trip.

On Sunday, the Kings bounced back from a 5-3 loss in Nashville the previous evening. LA skated to a 2-1 road win over Luke Richardson’s recently pesky Chicago Blackhawks. A pair of goals by Jaret Anderson-Dolan (4th and 5th) built a 2-0 lead. Kevin Fiala assisted on both tallies. Goalie Pheonix Copley made 18 saves on 19 shots after having back-to-back rough games in his previous two outings. In Saturday’s game in Nashville, Copley lasted just 39 seconds after the opening faceoff as he was pulled after Nashville scored twice on the game’s first three shots. The win in Chicago snapped a three-game losing streak for the Kings.