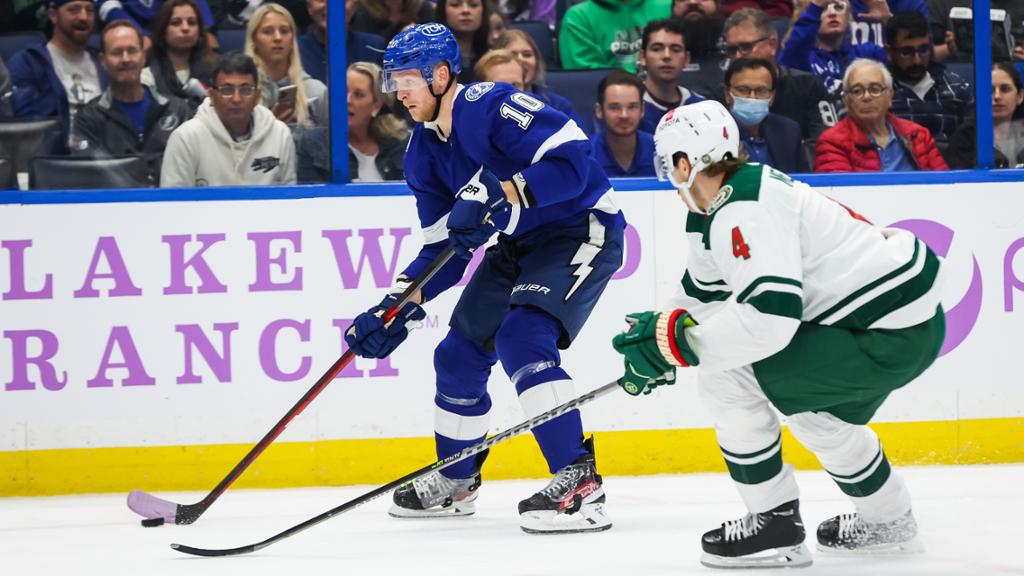 Everything you need to know ahead of Tampa Bay’s matchup against the Wild on Tuesday.

Tuesday’s Matchup
The Lightning and the Wild are playing the second of two matchups this season and the only meeting at AMALIE Arena…The Bolts dropped the first meeting of the season Jan. 4 at Xcel Energy Center with a 5-1 loss…Andrei Vasilevskiy was scheduled to start in goal for Tampa Bay, but was unable to play due to illness, forcing Brian Elliott to start for the second-straight night for the first time since he did so Dec. 28-29, 2017 with Philadelphia…Joel Eriksson Ek opened the scoring for MIN at the 14:30 mark of the first period before Kirill Kaprizov and Calen Addison scored back-to-back goals at the 7:09 and 9:27 marks of the middle frame to make it 3-0…Brayden Point got the Lightning back within two when he scored on the power play to make it a 3-1 game off assists from Brandon Hagel and Nikita Kucherov with 6:23 remaining in the second…Sam Steel put MIN back up by three 1:58 after Point’s goal when a shot from Jared Spurgeon deflected off his leg and into the back of the net…Kaprizov added an empty-net goal with 2:03 left in regulation for the final tally of the game…Elliott made 28 saves on 32 shots against in the loss…Tampa Bay is 7-3-0 over the last 10 home games vs. MIN and 3-6-1 over the last 10 meetings overall…Kucherov has recorded points in three straight games vs. MIN (2-2-4) and seven of the last 10 meetings (6-4-10)…Kucherov has pointed in four of six career home games vs. MIN (4-2-6)…Mikhail Sergachev has picked up points in four of his last five games vs. MIN (1-3-4)…Steven Stamkos has recorded an assist in the three of his last four games vs. MIN (0-3-3) and six of the last 10 meetings (0-6-6)…Tampa Bay is 10-17-3 with one tie all-time vs. MIN, including a home record of 8-5-1 with one tie…Stamkos (4-9-13) holds the Lightning franchise record for career points vs. MIN.

Tuesday’s Storylines
Tampa Bay is playing the first game of a three-game homestand tonight…The Bolts will play just five of their 13 games in January on home ice…The Lightning are 7-2-0 against Central Division opponents and 14-6-0 against the Western Conference this season…Tampa Bay is 17-4-1 at home this season with a .795 points percentage, trailing only Boston (.904) for the NHL lead…The Bolts have scored four or more goals in eight of the last nine games at AMALIE Arena…The Lightning have won nine consecutive games at AMALIE Arena, tied for the third-longest home winning streak in franchise history.

Tampa Bay Sports Item of the Game
Gasparilla 2-Pack Lapel Pin Set
The Gasparilla Pirate Fest is this weekend. Add the Lightning Gasparilla 2-Pack Pin Set to your collection. Available in store and online at TampaBaySports.com, while supplies last.