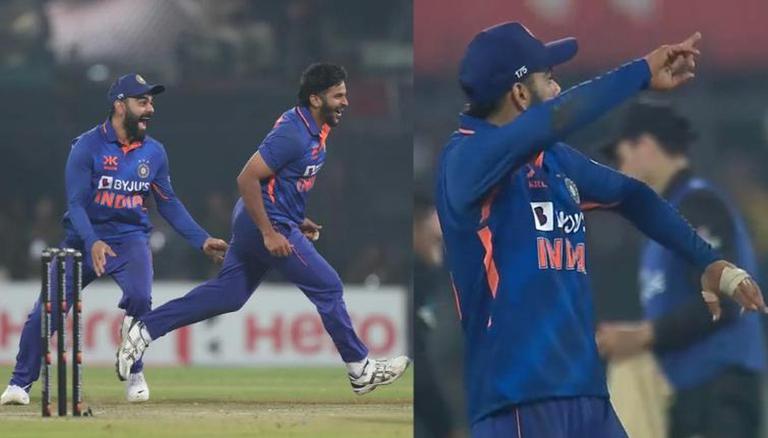 Team India completed a 3-0 ODI series sweep against New Zealand on Tuesday by picking up a 90-run victory at the Holkar Stadium in Indore. While Shubman Gill, Rohit Sharma, and Shardul Thakur emerged as the top performers in the game, former skipper Virat Kohli made headlines for a unique reason. In a video currently making rounds on social media, Kohli can be seen pulling off a few dance moves after a successful DRS call to send back Kiwi batter Daryl Mitchell.

In the first ball of the 26th over in the second innings, Indian allrounder Shardul Thakur bowled a short ball in the middle, as Mitchell attempted a pull shot. However, the Kiwi batter ended up mistiming and it looked like the ball took something off his bat, before landing in wicketkeeper Ishan Kishan’s gloves. While the on-field umpire denied the wicket, Men In Blue went upstairs with the DRS call.

Kohli saab watching himself dance on the big screen 😭 pic.twitter.com/6RT9OHpD5p

Kohli Kohli watching himself dance on the big screen

What a lovely character he is ❤️ pic.twitter.com/ly1XFgCcpc

Earlier in the first innings of the game, Kohli scored 36 runs off 27 balls as India reached a total of 385/9. Rohit Sharma and Shubman Gill opened the proceedings for India in stellar fashion by hitting individual centuries. Rohit scored 101 off 85 balls, which was his first ODI hundred in three years.

Shubman hit his second century of the series and fourth overall in 50-over cricket by scoring 112 runs in 78 balls. Meanwhile, Hardik Pandya’s 54 off 38 balls also provided a much-needed good finish to the innings. India won the game by 90 runs as the Kiwi side was bowled out on 295 runs, with Shardul Thakur finishing as the best bowler with figures of 3/45 in six overs.