The projected top player for every MLB team in 2023 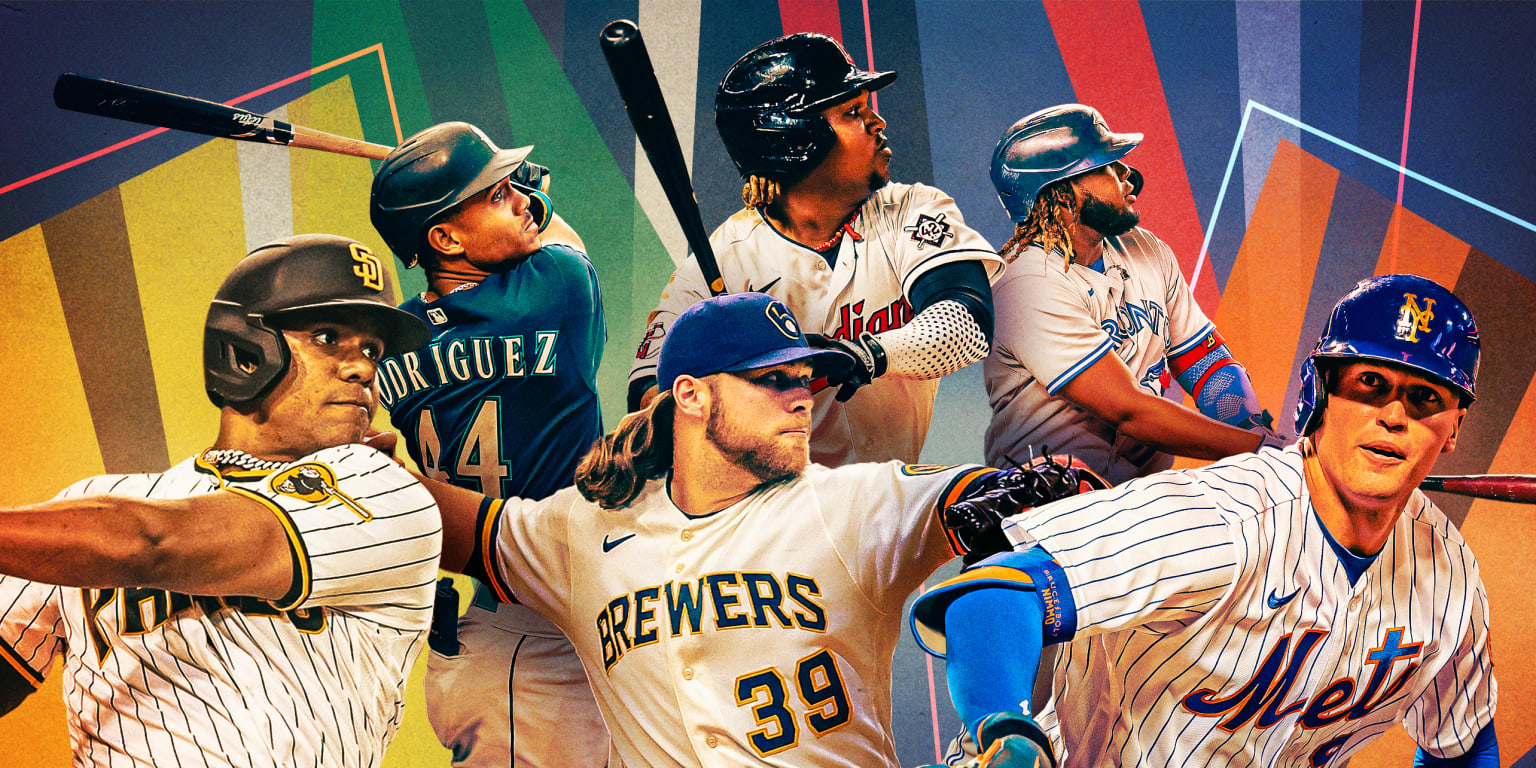 Every team has a star worth watching this year.

But who will those top players be? Let’s take a look at the Steamer projections on FanGraphs to find each team’s No. 1 player for the upcoming season.

Vlad Jr. is projected for 39 home runs in 2023, tied for second-most of any hitter behind Aaron Judge, to go with a .292 batting average, fourth-best of any hitter, and a Major League-best 111 RBIs. That would make him a Triple Crown threat.

After Rutschman’s Rookie of the Year runner-up season in 2022, an even bigger breakout could be coming for the 24-year-old backstop this season. Steamer sees Rutschman as the best catcher in MLB and a top-five position player overall, with the same projected WAR as Mike Trout, as well as 19 home runs and a 130 wRC+.

Franco was limited to 83 games due to injury last season, but when he’s on the field, the 21-year-old phenom has always lived up to the hype that made him MLB’s No. 1 overall prospect. Steamer thinks he’ll be a top-10 player in the Majors in 2023. Franco is projected for a 133 wRC+, 16 home runs, 10 stolen bases and one of the lowest strikeout rates in baseball over a full season at shortstop.

The Red Sox gave Devers an 11-year, $331 million extension to keep him in Boston, and the projections think the 26-year-old two-time All-Star will be the team’s best player and a top-five third baseman in baseball along with José Ramírez, Nolan Arenado, Alex Bregman and Manny Machado. Devers is projected for 32 home runs and 100 RBIs.

After his historic 62-homer season, Judge is once again projected to be the top home run hitter in baseball. No, he’s not projected for 60 again, but the reigning MVP is the only slugger projected for 40-plus homers in 2023. Steamer has Judge as the top hitter in the AL with 6.9 WAR and a 163 wRC+, with 44 homers and 106 RBIs.

Steamer has Ramírez and Arenado as the top of the class when it comes to MLB third basemen. The Guardians star, who was a top-five MVP finisher for the fourth time in 2022, is projected for 30 home runs and 20 stolen bases in ’23, which would be his third 30-20 season. The only other players projected for 30 and 20 are Julio Rodríguez and Ronald Acuña Jr.

Steamer expects last year’s No. 1 overall prospect to build on a rookie season during which he flashed his potential with 20 homers and 30 steals. The 22-year-old shortstop is projected to be one of four 25-25 players with 26 home runs and 27 stolen bases.

Now that Correa’s offseason saga has ended with a return to Minnesota, Steamer projects him to be the Twins’ best player in 2023 and a top-two shortstop in baseball along with Franco. The 28-year-old two-time All-Star is projected for 24 home runs and a 132 wRC+.

Robert’s five-tool talent is obvious and Steamer is projecting the 25-year-old center fielder to have his best season yet, with 25 home runs, 13 stolen bases and a 127 wRC+.

If the two-way superstar lives up to his projections in 2023, he’s going to be the favorite to win his second MVP Award in three years. Steamer has Ohtani as the No. 1 player in baseball if you combine his hitting and pitching value. He’s projected for 35 home runs, 16 stolen bases and 96 RBIs as a hitter and 12 wins, a 3.16 ERA and 217 strikeouts as a pitcher.

The Astros’ dangerous lefty slugger could be in store for another huge season in 2023. Alvarez is projected for 36 home runs and 105 RBIs, with a 162 wRC+ that would make him a top-five hitter in the Majors and the second-best in the AL behind Judge.

Laureano has yet to recapture the electric ability he showed in his first full season in 2019, but the 28-year-old center fielder is projected for a solid season with 22 homers and 17 steals.

Can J-Rod get even better after taking the baseball world by storm in 2022? Steamer is a believer. The reigning AL Rookie of the Year is projected to be a top-three position player in baseball as a sophomore alongside Juan Soto and Judge. Steamer has the 22-year-old center fielder with 32 home runs and 25 stolen bases in 2023.

The blockbuster pitching signing of the offseason could pay off big-time for the Rangers if deGrom lives up to these projections. Steamer sees him as the best pitcher in baseball by a wide margin in 2023, projecting deGrom for a 2.65 ERA — the next-closest starter is Shane McClanahan at 3.02 — and 236 strikeouts, third-most behind Gerrit Cole and Corbin Burnes.

Steamer thinks a return to MVP level is in store for Acuña in 2023. He’s the only player projected for a 30-30 season, with 31 home runs and an MLB-high 35 stolen bases, which helps make him a top-10 position player, per Steamer, ahead of star teammates like Austin Riley, Michael Harris II, Sean Murphy and Matt Olson.

The reigning NL Cy Young Award winner is projected for another workhorse season, with an MLB-high 211 innings, 200 strikeouts and a 3.56 ERA. That makes Alcantara the Marlins’ top player according to Steamer, ahead of Jazz Chisholm Jr.

The Mets brought back Nimmo on a $162 million contract, and Steamer thinks the 29-year-old center fielder will have the best season of anyone on the team — even better than Francisco Lindor, Pete Alonso, Max Scherzer and Justin Verlander. Nimmo is projected for a 133 wRC+ thanks to the strong on-base skills (.367 projected OBP, just outside the top 10 for all hitters) that make him so valuable as the Mets’ leadoff hitter.

One of the prize prospects the Nats got back in the Juan Soto trade, Abrams is projected to be the top player on a rebuilding team in 2023, with the 22-year-old in line for 11 homers and 17 steals plus strong defense at shortstop, per Steamer.

Turner, a two-time MLB hits leader, is projected to have the most hits in the Majors again in 2023 (177, just ahead of Bo Bichette). Turner is also projected for a 20-20 season (21 homers, 23 steals), and he just edges star catcher J.T. Realmuto as the Phillies’ top player for 2023 with Bryce Harper recovering from Tommy John surgery.

Arenado’s teammate Paul Goldschmidt was NL MVP in 2022; it could be Arenado’s turn in 2023. Arenado is projected to be the best third baseman in the league — what else is new? — with 29 home runs and 99 RBIs to go along with his usual Gold Glove defense.

Interesting that it’s the Cubs’ shortstop from 2022, Hoerner, and not the one they signed to a $177 million free-agent contract, Dansby Swanson, who’s projected to be their top player this season. Hoerner and Swanson are actually seen by Steamer as just about equally valuable, but the contact-hitting Hoerner, projected for a .280 batting average and low strikeout rate in addition to 11 home runs and 18 stolen bases, is ranked a tiny bit higher than Swanson’s 3.3 WAR projection.

Talented shortstop Oneil Cruz is a close second to Reynolds after his rookie season, but the 2021 All-Star outfielder is the one with slightly better projections for 2023. Reynolds is projected for 24 home runs, 83 RBIs and 91 runs scored for Pittsburgh.

Lodolo and Hunter Greene are projected to make big leaps in 2023 after exciting but up-and-down rookie campaigns. They could emerge as a pair of young aces for Cincinnati, with Steamer seeing both as top-25 pitchers by WAR and projecting 200-strikeout seasons for each. The 24-year-old lefty Lodolo gets slightly better numbers, with a 3.67 ERA and 207 K’s.

Here’s an exciting one. Carroll debuted late last August as the D-backs’ top prospect and established himself as the fastest player in baseball, leading MLB with a 30.7 ft/sec sprint speed. Now he’s projected to be Arizona’s No. 1 player in 2023, even ahead of Ketel Marte and Zac Gallen, with Steamer predicting 20 homers and 19 steals for the 22-year-old.

Betts has finished in the top five of NL MVP voting twice in his three seasons with the Dodgers, and he could make that three times in 2023 — Betts is projected as a top-five position player in MLB and the second-most valuable in the NL behind Soto. Steamer gives him 31 homers, 15 steals, 85 RBIs and 107 runs scored for 2023.

The veteran right-hander had a career resurgence in his first season in San Francisco, gaining mid-90s velocity and racking up strikeouts with his split-change. Steamer projects his success to continue in 2023 as the Giants’ top player (11 wins, 3.47 ERA, 161 strikeouts), neck-and-neck with rotation-mate Logan Webb.

The Padres got Soto to be the best hitter in the world, and that’s what Steamer thinks he’ll be in 2023. Soto is projected for the most WAR of any position player and the best wRC+ of any hitter (172), which sets him up as the preseason NL MVP favorite. He’s projected to lead the Majors in on-base percentage (.431) and walks (137) by a huge margin, and the 24-year-old lefty slugger is also projected for 33 homers, 95 RBIs and a Major League-high 113 runs scored.

One of the top shortstop prospects in baseball entering 2023, the 21-year-old Tovar is projected for a nice rookie season in Colorado after a cup of coffee in ’22, including a .280 batting average, 17 home runs and 12 stolen bases.