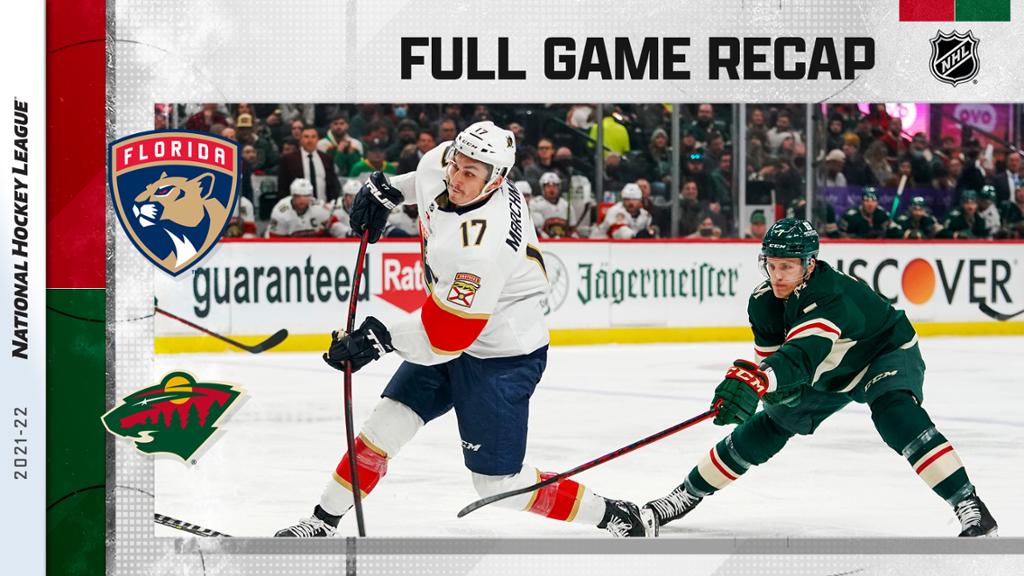 ST. PAUL, Minn. — Mason Marchment scored his first NHL hat trick for the Florida Panthers in a 6-2 win against the Minnesota Wild at Xcel Energy Center on Friday.

“Got to celebrate with the boys,” Marchment said. “It was awesome.”

Aaron Ekblad had a goal and an assist and Jonathan Huberdeau had two assists for the Panthers (34-10-5), who have won two in a row and six of their past seven games. Sergei Bobrovsky made 23 saves for his fifth straight victory.

“It’s another big win for us,” Bobrovsky said. “…We have great guys, we have deep lineups. Each game someone is stepping up with a huge performance for us.”

Huberdeau extended his point streak to six games (one goal, nine assists). He leads the NHL with 51 assists and his 68 points are tied with Leon Draisaitl and Connor McDavid of the Edmonton Oilers for the League lead.

Kirill Kaprizov and Mats Zuccarello each had a goal and an assist for the Wild (30-13-3), whose six-game home winning streak ended. Cam Talbot made 28 saves.

“We were unintelligent,” Wild coach Dean Evason said. “We never talk about obviously being better than a team or whatever, but we weren’t worse than that team tonight. We just made worse mistakes. Our start was great. Our energy level was great. The way we competed, how we were playing the game. We turned the puck over and another mistake on the second one and third. Then it snowballed on us.

“They’re too good a team to come back on like that even though we fought at the end. But it’s uncharacteristic. … It’s a good chance for us to hopefully get the attention quickly and turn it around.”

Kaprizov made it 1-0 at 7:07 of the first period with a one-timer at the goal line off a slap pass from Jared Spurgeon on the power play. It was his 50th goal in his 100th NHL game.

Marchment tied the game 1-1 at 10:02 with a wraparound goal. Marchment scored again at 12:29 for a 2-1 lead after Anton Lundell backhanded a pass to him in the slot.

The Panthers are outscoring their opponents 14-1 with the Marchment-Lundell-Sam Reinhart line on at 5-on-5.

“We’re on the same page most games and that’s just something we gotta work on, just keep on the gas and just keep going,” Marchment said. “Tonight is one of those nights where it’s going in. Just keep rolling with it.”

Anthony Duclair put the Panthers ahead 3-1 at 8:38 of the second period with a one-timer from the right circle off a pass from Huberdeau. It was the 200th goal for Florida, making them the first NHL team this season to reach that mark (49 games played).

Ekblad scored a power-play goal to make it 4-1 at 1:41 of the third period. Duclair passed to Ekblad at the point, and he side-stepped to the left circle for the shot.

“Just the fourth one, I wasn’t really happy with. That one’s on me,” Talbot said. “Right now we’re making a few too many errors in our zone, myself included, and it’s costing us now.”

Video: FLA@MIN: Ekblad fires one in from the circle for PPG

Zuccarello made it 4-2 at 9:42 nine seconds into a power play, finishing a set-up from Kaprizov.

Marchment added another empty netter at 14:43 for the 6-2 final.

“It was fun to see him get a hat trick,” Panthers coach Andrew Brunette said. “He had so many good chances the other night in Columbus to get it and didn’t get it so I’m glad he got rewarded tonight.

“[Marchment’s] playing with a lot of confidence right now and his line’s got a lot of good chemistry together and I think they enjoy playing with each other. They’re taking advantage of it. He’s been an unbelievable stretch. He’s just producing at a surreal number right now and it’s fun to see. The confidence is oozing out of him. And he’s so strong on the puck.”