Are the Klitschko Brothers of Ukraine Back in the Fight? 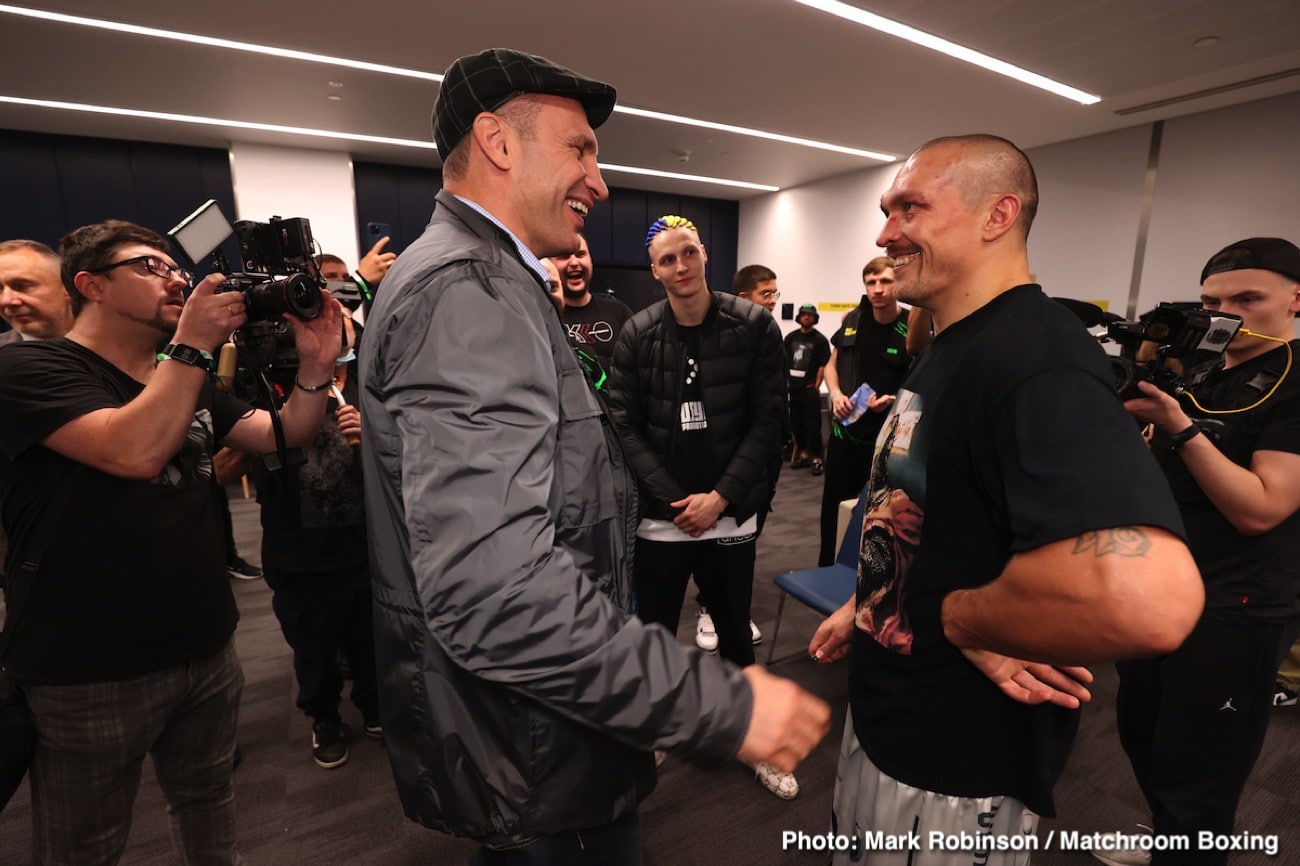 By Ken Hissner: There was a time back in 1989 through 2011 Vitali “Dr. Ironfist” Klitschko and Wladimir “Dr. Steelhammer” Klitschko reigned as world heavyweight champions in the WBO, WBA, WBC, and IBF organizations.

Now their fight is against Russia’s threat of invasion of their country of Ukraine. Vitali is the mayor of Kyiv, and Wladimir just joined the Ukraine National Guard.

Vitali, the older of the two, was born in Kyrgyzstan in 1971 and was 195-15 in the amateurs. It wasn’t until 1995 he won a major championship in the world military championships in Italy, defeating the Russian Alexei Lezin.

In November of 1996, fighting out of Germany, Vitali made his professional debut. He won his first minor title in May of 1998, stopping America’s Dicky Ryan, 46-3, for the WBO Inter-Continental heavyweight title. Three fights later, Ryan would travel to Denmark and stop the winning streak of Denmark’s “Super” Brian Nielsen at 49-0, stopping him in the tenth and final round.

In August of 1998, Vitali made his US debut, stopping Ricardo “Explosive” Kennedy, 14-6-1, in Florida, only the second time fighting out of Germany. In his next fight, he won the vacant EBU title stopping the German champ Mario Schiesser, 36-3-1. In his next fight defending that title, he debuted in Ukraine, stopping the Italian champion Francesco Spinelli, 19-4, putting him into retirement.

Two fights later, in June of 1999, Vitali won the WBO World title, stopping Herbie “Dancing Destroyer” Hide, 31-1, in two rounds. In his third defense in June of 2000, he lost his title to American Chris “Rapid Fire” Byrd, 30-1, due to a shoulder injury in Germany.

What would happen in Byrd’s next fight was typical of the Klitschko brothers. You beat one, and the other would destroy you. Six months after winning the title, Byrd lost a decision and the title to the younger brother Wladimir, 34-1, in Germany.

Wladimir was born in 1976 in Kazakhstan and was 134-6 in the amateurs. He lost to Russia’s Lezin just prior to the 1996 Olympics in the European championships and in the same year defeated him to win the Olympic Gold Medal in Atlanta, Georgia, in the semi-finals.
Wladimir turned professional in November of 1996 on the same card his brother Vitali turned professional. In February of 1998, he won his first minor title, stopping American Marcus McIntyre, 15-1, for the vacant WBC International heavyweight title In Germany in his seventeenth straight win.

Getting back to the career of Vital’s after losing his WBO title to Byrd in his next fight, he re-won the now vacant EBU title defeating Timo Hoffman, 22-0, stopping former WBA Cruiserweight champion Orlin “Night Train” Norris, 51-6, stopping Purrity, stopping Vaughn “Shake Bake Vicious” Bean, 42-2, and stopping Larry “The Legend” Donald, 32-2-1, in a WBA title eliminator.

In June of 2003, Vitali, while ahead after five rounds 58-56 on all scores, was stopped on a cut to WBC World Champion Lennox “The Lion” Lewis, 40-2-1, who retired after that bout. Six months later, in his next fight, Vitali stopped Kirk “Bubba” Johnson, 34-1-1, in a WBC title eliminator.

In April of 2004, Vitali stopped Corrie “The Sniper” Sanders, 39-2, for the vacant WBC title in L.A., California. It was a year almost to the day since Sanders stopped Wladimir for the WBO title. Vitali would go on to win his next eleven fights ending with stopping Mahmoud “Diamond Boy” Charr, 21-0, in Moscow, Russia, in September of 2012. His final record was 45-2 with 41 stoppages. He would later be inducted into the IBHOF.

Getting back to Wladimir. Since losing to Ross Puritty, he won eleven straight, defeating Chris Byrd for the WBO World title. Then he won five straight before losing to Corrie Sanders in 2002. He would bounce back, stopping his next two opponents, then was stopped by Lamon “Relentless” Brewster, 29-2, for the vacant WBO title in Las Vegas, Nevada, in April of 2004.

Wladimir would win his next three fights, including defeating Samuel “The Nigerian Nightmare” Peter, 24-0, in Atlantic City, New Jersey, in an IBF and WBO title eliminator. In his next fight, he would be in a rematch with IBF World champion Byrd, 39-2-1, stopping him in seven in Germany. Wladimir would win his subsequent eighteen battles, including stopping Brewster, 33-3.

Wladimir would win his next eleven fights, making it twenty-two in a row before losing to current WBC World Champion Tyson “The Gypsy King” Fury, 24-0, by decision in Germany, in November of 2015.

In his next and final fight in April of 2017, he lost to WBA and IBF World Champion Anthony “AJ” Joshua, 18-0, by decision in London by stoppage in eleven rounds. He ended his career at 64-5 with 53 stoppages. He would be eligible for the IBHOF this year.
What’s next for the “fighting Klitschko’s?” Russia?