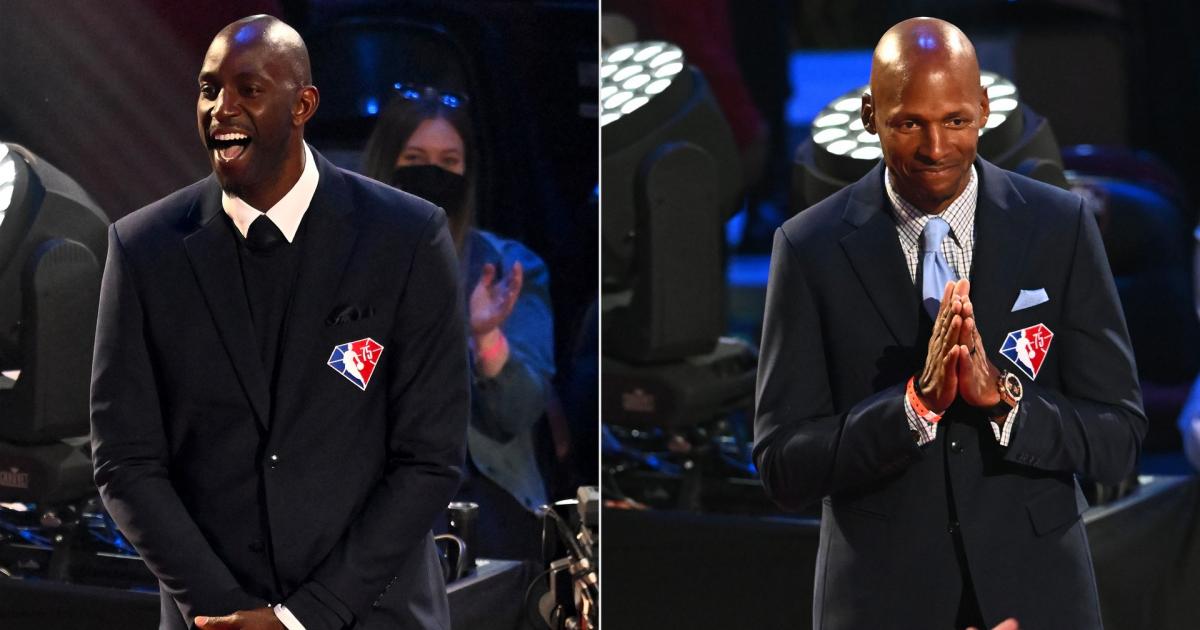 In celebration of the NBA’s 75th anniversary season, present members of the NBA 75 Team were introduced at halftime of the 2022 NBA All-Star Game by position group.

As the forwards and centers stood on a platform at halfcourt, the guards were the last position group to be announced. Ray Allen was one of them. He made his way toward the platform after he was introduced.

As Allen walked by, the dynamic between him and his former Celtics teammates was noticeably awkward.

This video clip remained the predominant theme or storyline regarding Garnett and Allen overnight or even into Monday morning.

The moment itself is telling as Allen is immediately greeted by LeBron James, with whom he won an NBA title as a member of the Heat in 2013. Meanwhile, Paul Pierce and Garnett, who are standing directly next to LeBron, awkwardly look off as if the interaction isn’t happening in front of him.

However, nearly 24 hours later, there was an image doing the rounds that told another story. It was posted by the Celtics but was seen earlier on Paul Pierce’s Instagram.

The discord between Allen and Garnett dates back nearly a decade to when Allen opted to leave the Celtics for their rival Heat as a free agent in the 2012 offseason.

When the two teams met to open the 2012-13 NBA season, Allen greeted his former teammates and coaches but Garnett was not receptive to Allen’s attempt to move past things, staring blankly when his former teammate patted him on the shoulder.

When members of the Celtics’ 2008 championship team reunited on Garnett’s “Area 21” program in 2017, Allen was a glaring absence. Garnett addressed Allen’s absence, saying, “when Ray decided to go to the Heat I feel like he moved on and he went to pursue another ring and he got another ring – shout out to him. And that’s it.”

One year later, Allen addressed the ongoing rift, saying Garnett had “forgotten the genesis” of their relationship, which dates before their time as teammates.

This past August, it appeared that Garnett was still taking issue with Allen, strategically cropping him out of a photo that he shared to his Instagram story.

In October, however, it appeared that the NBA 75 announcement had mended things between the two, as Garnett gave Allen a shoutout on his Instagram story for being named to the all-time team.

Perhaps the two didn’t know how to properly acknowledge one another in that setting or, more likely, remnants of their grudge remain nearly 10 years later.

Regardless of why the two had this type of non-interaction during the celebration, it was awkward to watch in real time.