Meyers Makes the Most of NHL Debut 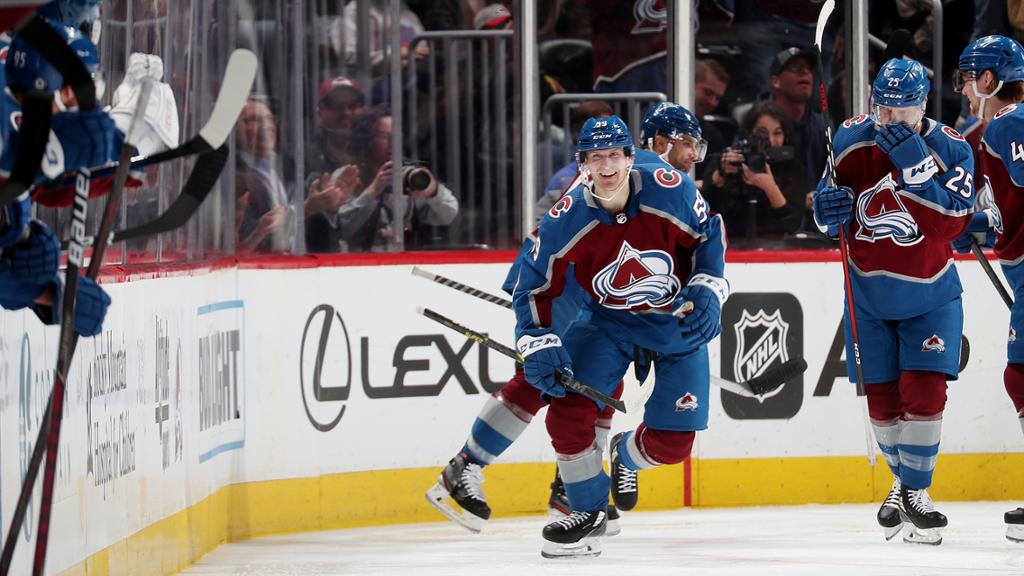 It was already a whirlwind week for Ben Meyers, who signed a two-year contract on Wednesday with the Colorado Avalanche just days after his collegiate career with the University of Minnesota ended in heartbreak in the 2022 Frozen Four, but even that spectrum of emotions didn’t compare to what he experienced on Saturday night in his NHL debut.

“I blanked out,” Meyers said with a smile when asked about what went through his mind when he saw the puck cross the goal line to notch his first-career goal in his first NHL game, a feat that only seven other players in Avalanche history (since relocating) have accomplished.

Meyers’ NHL debut was eventful to say the least as he joined Colorado’s lineup in its exhilarating 7-4 win over the Carolina Hurricanes at Ball Arena which officially clinched possession of the top seed in the Western Conference and extended the team’s winning streak to nine games.

In addition to his goal, the 23-year-old centerman logged 9:30 minutes, fired off two shots and was 10-for-16 (63%) in the faceoff circle as he skated on a line alongside Andrew Cogliano and Logan O’Connor.

“I liked him a lot,” Avalanche Head Coach Jared Bednar said of Meyers. “He’s a strong skater, [has] a great motor, and was in pursuit of the puck all night. He has pretty good details to his game. He’s just learning our structure and I thought he was good.”

The 5-foot-11, 194-pound left shot extended Colorado’s lead 4-0 over the Canes early in the second period and 25 seconds after J.T. Compher buried his second power-play goal of the night. The play unfolded as O’Connor sent a pass from below the goal line to the net front, where put in the loss puck that was fumbled around by roofing a backhanded shot over Carolina netminder Frederik Andersen.

As Meyers skated over to the Avalanche bench to go down the handshake line after lighting the lamp, he was halted along the way and seized with hugs from his new enthusiastic teammates.

“We were all happy,” Bednar said. “You could see our bench, we were all happy for him. It’s a big deal to play your first NHL game. It’s not easy to get here then, to be able to play real well. He was good in the faceoff circle, he was going to the net hard, he was playing the right way. He was doing exactly what we wanted in the play.”

The reaction from Colorado’s bench was just a microsim of the warm welcome Meyers had received from the organization as he recalled a classy move by the team’s captain on his first day of practice that set the tone.

Video: CAR@COL: Meyers makes it 4-0 from front of the net

During his special and monumental night, Meyers had his parents, brother, cousin and his cousin’s kids in attendance for the special night, which was capped off with being named the Third Star of the Game and posing in the Avs’ dressing room for the customary “First NHL Goal” photo holding the puck.

The special night will be one Meyers never forgets. While he still continues to balance wrapping up his junior year of school at Minnesota with getting his first experience of professional hockey with Colorado’s organization as just seven regular season games remain, he’s just continuing to embrace the opportunity he deservedly earned.

“My only goal was to just compete hard,” Meyers said. “And if I could do anything to help the team win.”