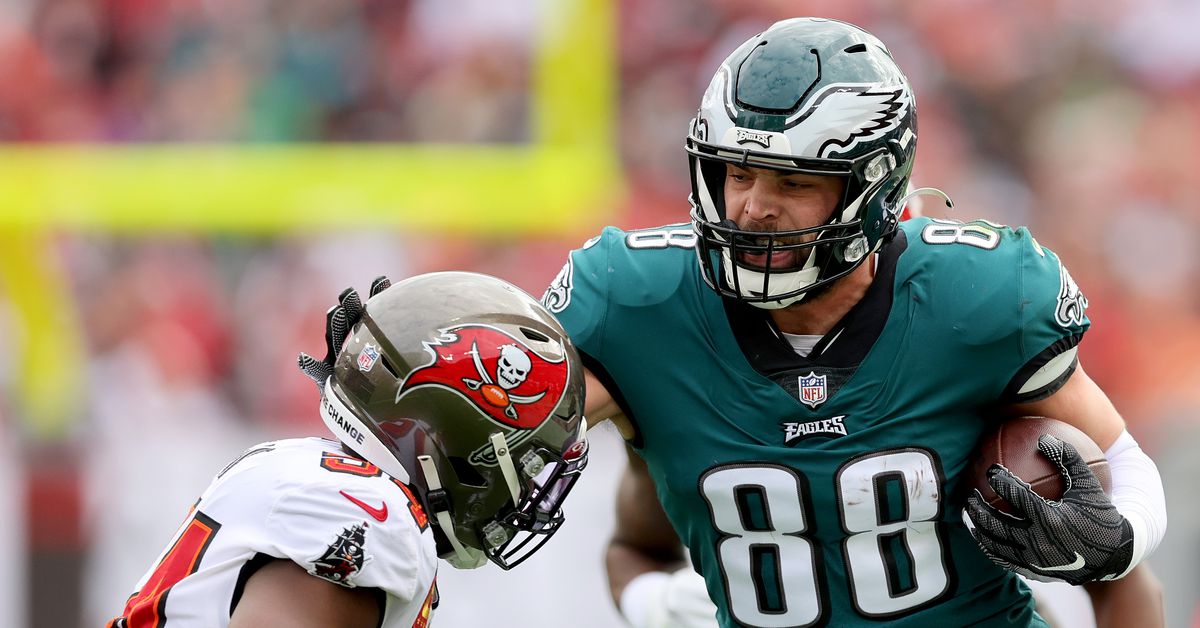 Let’s get to the Philadelphia Eagles links …

Ranking the NFL’s top 10 tight ends for 2022: Execs, coaches, players make their picks for the best in the game – ESPN+
6. Dallas Goedert, Philadelphia Eagles. Goedert was the most consistent vote-getter in the next tier of tight ends, appearing on nearly 80% of the ballots. He is considered versatile for his ability to run routes with nuance and burst; flex into different positions, such as slot tight end or backside receiver; and hold up as a blocker in the running game. “He’s kind of a sleeper to me,” an AFC personnel evaluator said. “Never gets huge media praise, but he’s a big, smooth athlete who’s good in both phases of the game — can stretch the seams and also has enough athletic ability to run the route tree.” Young quarterbacks need nothing more than a friendly target over the middle, and Goedert provides Philadelphia’s Jalen Hurts with just that. Hurts produced a 92.8 QBR when throwing Goedert’s way, and 25.0% of Goedert’s catches went for at least 20 yards, second among tight ends last season behind Tampa Bay’s Rob Gronkowski. Only Pitts had more yards per reception than Goedert’s 14.8. In all, Goedert caught 56 balls for 830 yards and four scores — but his 6.6% drop rate wasn’t stellar. “One of the few three-down-capable TEs that win from multiple spots in the passing game with speed to win vertically, and he gives you enough as an inline blocker,” an NFC executive said.

Top fantasy football breakout candidates: Players to watch from all 32 NFL teams – The Athletic
TE Dallas Goedert: Last year was supposed to be Goedert’s breakout season, but the Eagles didn’t trade Zach Ertz until October and shifted to a run-heavy offense during the backstretch of the season. Goedert is the unquestioned top tight end in 2022 and is poised to build on his 56-catch, 830-yard campaign last season. Goedert’s target share could be complicated by the presence of A.J. Brown and DeVonta Smith, although the Eagles are expected to pass the ball more and gave Goedert a four-year, $57 million contract with the belief he could be one of the NFL’s elite tight ends. Goedert ranked fifth among tight ends in yards last season even though he ranked 17th in targets. If his targets jump from 76 to the 90-100 range, the Eagles and your fantasy team will benefit.

Up Front – Iggles Blitz
Losing Johnson would be tough again this year. I don’t want to minimize how good he is, but the Eagles are in a much better spot. They have drafted, signed and developed good players. I’m still excited to see Kayode Awosika in action. He could prove to be a good backup OG. Josh Sills and Will Dunkle are talented rookie UDFAs who could make the practice squad and develop into NFL players. Rookie Jarrid Williams should play RT and has NFL tools. It will be interesting to see if Stoutland can develop him.

NFC East notebook: Do the Eagles believe they have a franchise quarterback? – Big Blue View
It makes sense that those within the organization still have some reservations about Hurts. While the team has very publicly supported the quarterback, the team did kick the tires on Russell Wilson and Deshaun Watson. The team also traded for a future first-round pick from the New Orleans Saints to ensure that they had all options open. So while they can say that they are confident Jalen Hurts is their guy, the team continues to make moves that don’t necessarily show the same confidence.

Report: Dallas Cowboys and Dalton Schultz not expected to reach new deal before Friday’s deadline – Blogging The Boys
It never felt like the Dallas Cowboys and Dalton Schultz were going to agree on a long-term deal, especially considering the fact that the tight end already signed his franchise tag. Schultz decided to forego the remaining portion of voluntary activities this offseason due to dissatisfaction over the way contract negotiations were going, but the fact that he signed the tag a few months ago gave the Cowboys a lot of leverage and no reason to act. This Friday is the deadline for the team and Schultz to agree to a long-term contract or else he is locked into the tag that he signed. According to ESPN, it is unlikely that Schultz and the Cowboys will reach a deal before the clock strikes midnight.

Commanders QB, WR, RB & TE reports from Football Outsiders Almanac 2022 – Hogs Haven
“The book on Wentz last year was to keep throwing zone coverages at him. His DVOA declined by 14.6% against zone in 2021 and by 14.3% against zone in 2020. Wentz was hit in motion a league-high 12 times last season and a league-high 11 times in 2020, and the Colts had a -36.3% DVOA on throws to receivers behind the line of scrimmage. Defenses were able to wait out his big mistakes while they made him hold the ball longer, and the only element of the short game to keep defenses honest (and hide a lot of bad Wentz play) was Jonathan Taylor carries.”

The Bengals new uniforms are the coolest in the NFL – SB Nation
The official uniforms will unveiled by the Bengals soon, but this look is so fresh it hurts. I love that these are alternates that actual make sense. White bengal tigers are a thing, and the black and white look should become their full-time away uniform. The orange and black at home, the white away — it just all makes sense.

NFL Daily Kickoff, Friday- No long term deals for tagged players expected – The SB Nation NFL Show
Players on the franchise tag aren’t expected to sign long term contract, Tom Brady might retire after the year…but he might not.