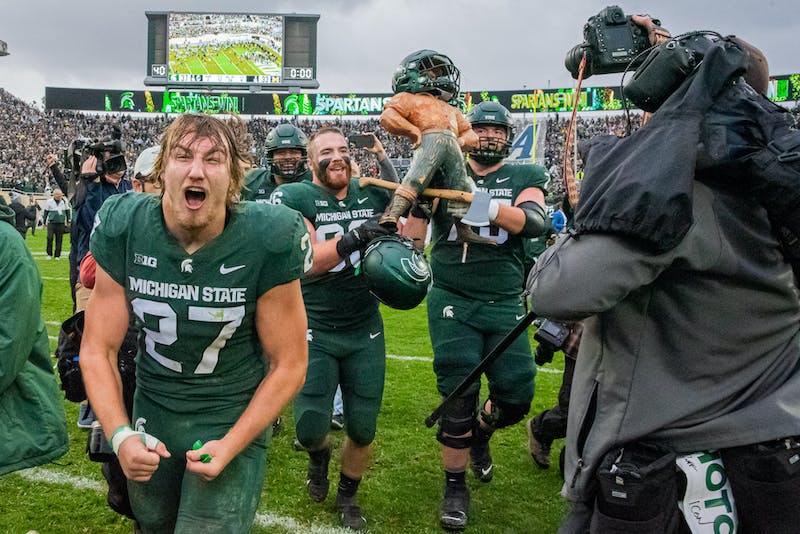 Each week heading into the fall football season for MSU, The State News will be taking a look into each position group on Mel Tucker’s roster as the Spartans prepare for their third season under the Tucker regime. In this edition, Sam Sklar dives into who will help the linebacker depth become stronger in the fall.

Haladay was splendid as a redshirt freshman, earning freshman all-American and all-conference honors. Crouch was serviceable too, but there were evident times showing he was learning the Michigan State system on the fly.

He probably could have benefited from a second season with the Spartans, but MSU turned to the portal to grab two significant linebackers: senior Jacoby Windmon and fifth-year Aaron Brule. Both projected as plug-and-play players for this fall, and Crouch saw the writing on the wall. He entered the transfer portal at the end of the spring, where he has yet to land with another team.

“They like to run in here,” Head Coach Mel Tucker said of Windmon and Brule. “They really do. They hunt the ball. Some people fish and some people hunt, and they hunt.”

Even with Crouch’s departure, the linebacker depth appears to be stronger than last fall. Haladay missed the fourth quarter versus Western Kentucky and the first half at Rutgers the next week for a targeting ejection. Crouch also missed three games with an injury, and Michigan State’s defense slouched when either was off the field.

The hope is the added depth to the room can stabilize the position a bit more while also allowing special personnel packages to be used in certain situations. Defending against the pass is one area the Spartans must improve.

“That depth again like the corners, it adds competition,” Scottie Hazelton, who will be coaching the linebackers in 2022, said. “When they see someone else make a play, it’s a good thing. And the cool thing about the room is they all help each other out and they all bring each other along and they all hold each other accountable and that’s starting to grow and starting to be better.”

The wildcard for the linebackers comes from junior safety Darius Snow. He can play just about everywhere on the field, starting eight games at nickelback and one game at safety in 2021. Snow spent this spring with the linebackers and could take some snaps there this fall.

“The goal for me personally when they told me that I was going to work with them in the spring was to really get that position down like I had all the secondary down and I believe that I’m at that point,” Snow said following the final spring practice. “So that’s now five positions that I know very well in the back of my head. I’m trying to learn – not that I’m gonna play it – but I’m trying to learn the D-end as well. So the more you know, the better and that’s essentially what I’ve done.”

Here’s a breakdown of the Michigan State linebacking core:

Of all the pleasant roster surprises in 2021, Haladay certainly deserves to be in that group. As a true freshman in 2020, Haladay played just 23 special teams snaps before redshirting the remainder of the season. Just one year later he was a different breed, leading the Spartans and tying for 11th in the Big Ten in tackles (96).

“He’s a really good football player,” Hazelton said. “He’s like a slippery dude that doesn’t do things technically right hardly ever, but he just kind of finds a way to make a play.”

That’s probably a perfect way to describe Haladay. He doesn’t wear gloves and isn’t technically sound, but he gets the job done. Haladay also added two pick-sixes last year, one that helped jolt a weak MSU offense at Indiana and another to seal the Peach Bowl victory versus Pittsburgh.

The question for him is whether or not he can take that next step of progression as a redshirt sophomore. And if he does, what will it look like?

One of two prized pickups from the transfer portal, Windmon arrives from UNLV and very well may be the most impactful portal addition of the offseason. He played his first two seasons as a defensive end, but switched over to linebacker and became the team’s leading tackler instantaneously.

Windmon’s 119 total tackles were third best in the Mountain West and also 13th in the nation. He was productive as a pass rusher as well, leading UNLV with 6.5 sacks, the most in school history since 2011.

Windmon is speedy, elusive and athletic – a bit opposite of Haladay. They should complement each other well though. Windmon played the most defensive snaps on UNLV last year, so he’s capable of being an every-down linebacker. He will see the field a lot, but probably won’t be needed to play as many snaps as he did at UNLV given Michigan State’s depth.

The other headlining linebacker addition, Brule is a graduate transfer from Mississippi State who brings a similar frame and style of play as Windmon.

Brule has great vision, speed and has the ability to line up on the edge too. He had a career year as a redshirt sophomore in 2020 loading 77 tackles and leading Mississippi State with 8.5 tackles for loss while making 11 starts. His snap count dipped a bit last fall but still was productive in the 514 defensive snaps he earned. Expect Brule, Windmon and Haladay to be the three mainstays at the linebacker position.

A few months ago, it looked like the jewel of Michigan State’s 2021 recruiting class was on his way out. Gaoteote was a four-star recruit out of high school and played sparingly as a true freshman last fall. He then entered the transfer portal in January only to withdraw his name two weeks later.

With his first year at MSU under his belt, Gaoteote could be a guy who takes a jump in 2022.

VanSumeren had a quirky offseason similar to Gaoteote. He entered the transfer portal one day before the beginning of spring practices but continued to practice with the team. It was one year after he made the trip down the road as a transfer from Michigan. VanSumeren logged just 122 defensive snaps in 2021 but withdrew his name from the portal in April and will team up with his younger brother, Alex, a freshman defensive tackle and top recruit in the Spartans’ 2022 class.

“(Ben) VanSumeren is doing a good job – I think that might’ve been a one-handed interception in the scrimmage,” Tucker said midway through the spring. “He snagged a ball down in the red zone and took off like a rocket. That guy can run, he’s athletic. I like what I’m seeing at that linebacker position.”

Up until two weeks ago, “Tank” Brown was listed as a defensive end but has since been changed to linebacker on Michigan State’s online roster. It was his original position out of high school and he played there during his one redshirt season at Minnesota. When he transferred to Michigan State last year, he transitioned to defensive end ahead of the 2021 season, but an injury sustained in week one sidelined Brown for seven weeks. He never topped more than 20 defensive snaps last fall, but the talent is there.

Brown could come to form soon whether it is at linebacker or defensive end.

MSU has a handful of other linebackers on its roster. Carson Casteel is a former three-star recruit who redshirted in 2021. Quavian Carter is an incoming freshman who played safety in high school but may slide over to linebacker. Redshirt sophomore Sam Edwards joined as a preferred walk-on in 2020 but has yet to see game action. Redshirt freshman Liam Carr walked on last season and senior Tommy Larson is a recent walk-on from Lawrence Tech.