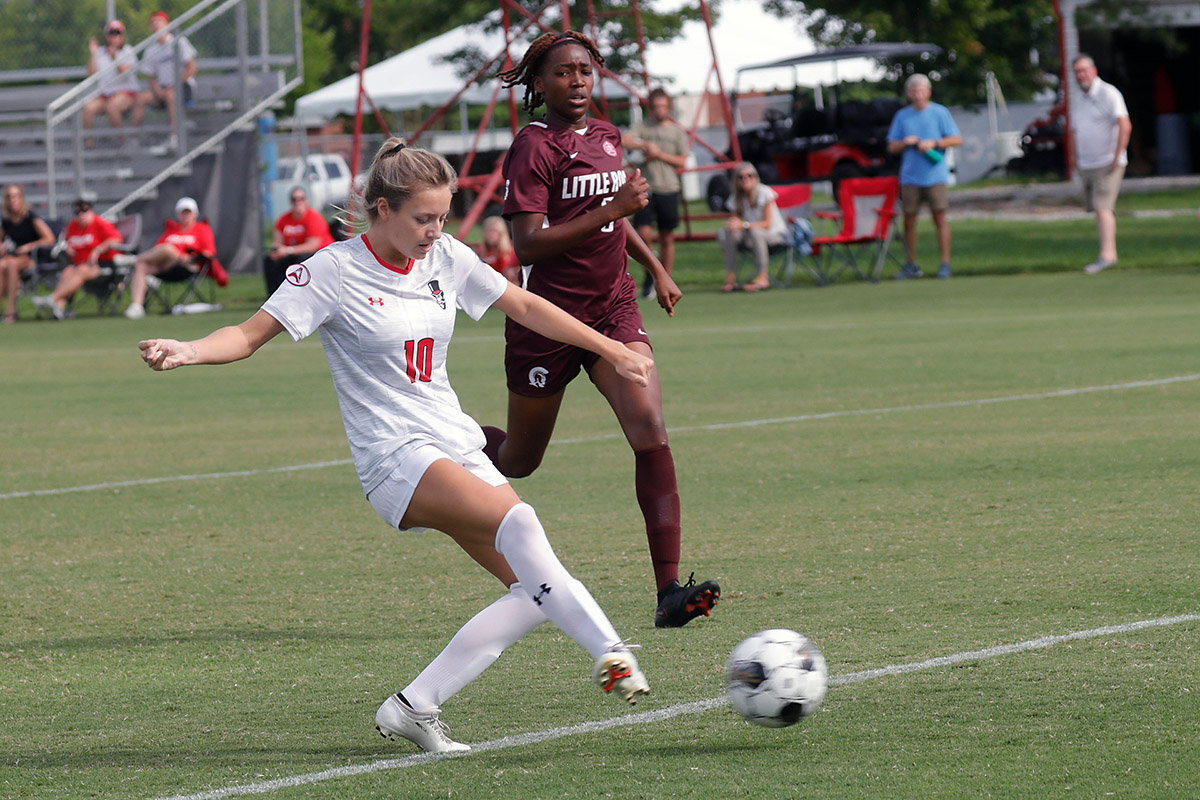 Clarksville, TN – Sophomores Clara Heistermann and Olivia Prock found the back of the net for the Austin Peay State University (APSU) soccer team in its first preseason match, as the Governors earned a 2-0 victory against Little Rock, Sunday, at Morgan Bros Soccer Field.

The Govs maintained possession early in the first of three 30-minute periods and capitalized on it in the 25th minute when senior Jisela Dall connected with Heistermann on a corner kick for the score.

Prock and the APSU Govs wasted no time extending their lead in the second period, as the Anthem, Arizona native fired a shot off the Little Rock goalie before collecting the rebound and putting it in the wide-open net.

The APSU Govs outshot ULR 17-5 with graduate student Marli Niederhauser matching the Trojans in shots on goal with two.

Goalkeepers Chloé Dion and Katie Bahn split time in the net during the shutout, each playing 45 minutes and tallying a save.

Austin Peay State University improves to 2-0-1 in its last three exhibition matches and 6-3-4 in preseason contests since 2015. Sunday’s win also marked the first shutout victory in a preseason affair since a 3-0 win against Indiana State, on August 8th, 2017.

Opening thoughts… “For the first time playing against an opponent with a new team, we walked away with some good positives and also some learning moments. Little Rock broke us down a few times which helps us identify some problems to clean up as we continue in the preseason.”

On Heistermann and Prock’s scores… “Clara and Olivia finding the back of the net is huge for their confidence and the team. Our main focus is attacking, so it was great to find success early.”

On the defensive effort… “Hats off to our backline and keepers who are almost all returners. We feel strongest in the defensive third and they played well.”

On moving forward… “This week at practice we need to clean up some of our details with movement off the ball and decision making. The team has been working hard, and I am sure this week they will continue to show up and bring the energy.”

Next Up For APSU Soccer

The Austin Peay State University soccer team suits up for its final preseason test when it welcomes Western Kentucky Sunday for a 2:00pm match at Morgan Brothers Soccer field. The Govs then kick off the regular season on August 18th with a 3:00pm match at Miami (OH).