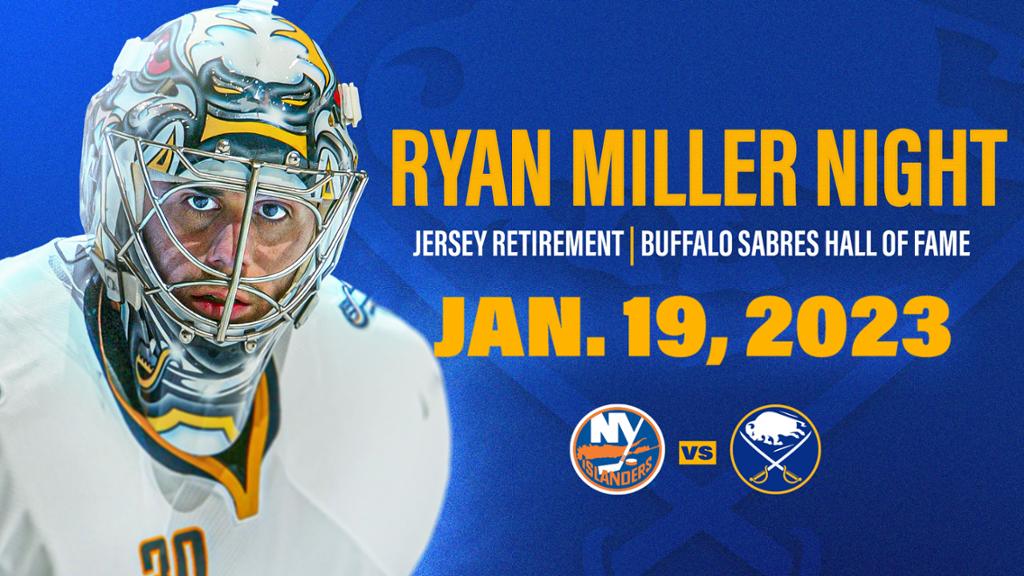 Ryan Miller will be honored on Thursday, January 19, 2023 when the Buffalo Sabres face the New York Islanders at KeyBank Center, the team announced Thursday morning.

The Sabres will celebrate the career of the goaltending great as he will be inducted into the Buffalo Sabres Hall of Fame and have his No. 30 retired to the rafters in a pregame banner-raising ceremony.

Miller, who spent parts of 11 season with Buffalo from 2002 until 2014, is the franchise’s leader in games played by a goaltender (540), wins (284), and saves (14,847). His 28 shutouts as a Sabre are second only to Hall-of-Fame netminder Dominik Hasek and his .916 save percentage ranks third. He finished his career with more wins (391) than any other American-born goaltender in NHL history.

He will be the eighth Sabres player to have his number retired. The orgnaization surprised Miller and his family with the news while they were back in Buffalo for a visit in June.

Video: Sabres announce Miller’s No. 30 will be retired

Half-Season and Full-Season ticket plans are the only way fans can guarantee they will be in the building for Ryan Miller Night.

Full-Season Plans are on sale now.

Half-Season Plans, which include 22 games with unique benefits and exclusive experiences, go on sale Monday, August 15. To speak with a Ticket Sales Representative and learn more about Half-Season Plans, click here.

Single Game Tickets will be on sale to the public the first week of September. Other ticket plans will also be announced at a later date.

The season begins when the Sabres play the Ottawa Senators for the home opener on October 13.

Fan Appreciation Night will be held during the final game of the regular season when Buffalo hosts Ottawa again on April 13.

Other theme nights will be announced in the coming weeks.