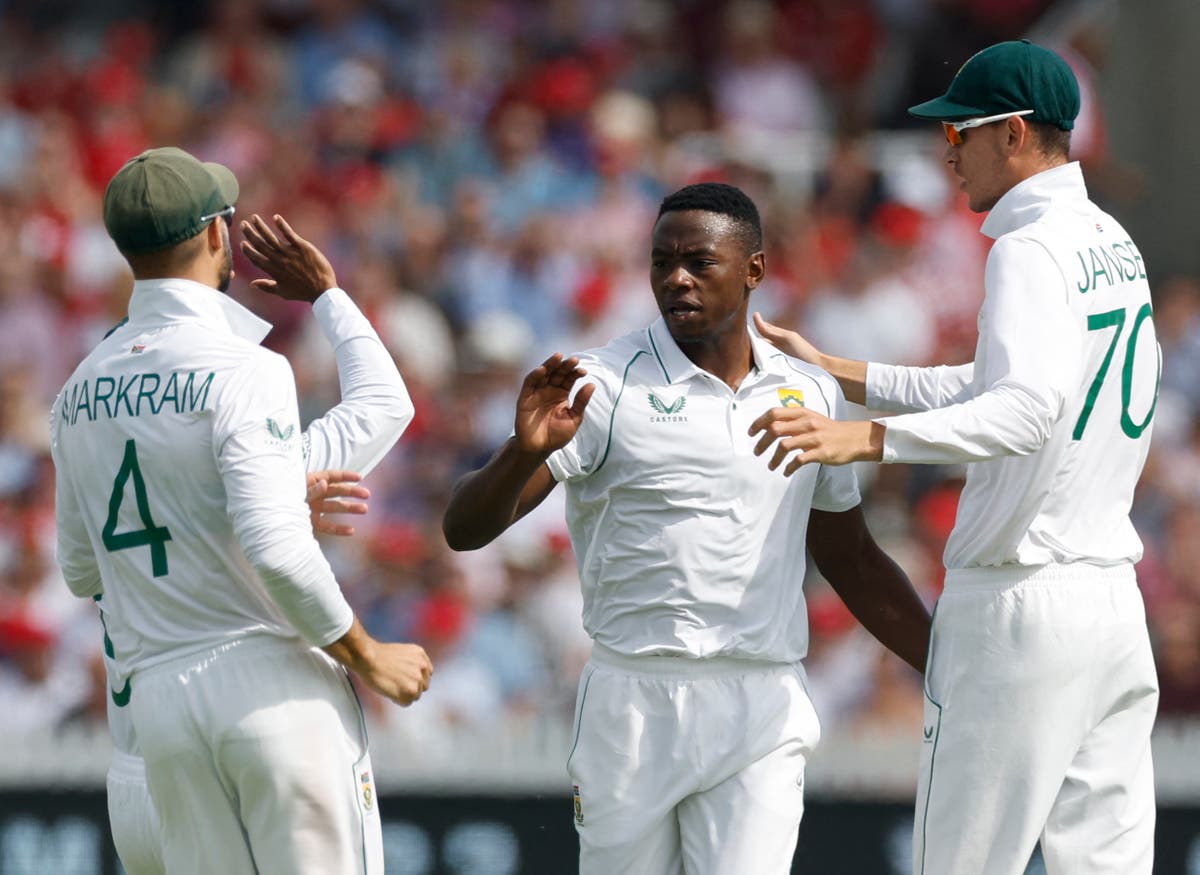 England take on South Africa on the second day of the first Test at Lord’s today and the hosts begin under the pump after an impressive opening day by the tourists on Wednesday.

Rain halted the tourists’ charge on day one with England struggling to 116 for six and on the verge of posting their lowest total since the new regime of Ben Stokes and Brendon McCullum set about transforming red-ball cricket in this country. While the hosts moved beyond the 141 they scored here against New Zealand in June, Kagiso Rabada sent Ollie Pope back to the pavilion early and picked up five for 52 to bring England’s first innings to an end for 165 inside an hour on day two.

Much of the pre-match rhetoric had revolved around ‘Bazball’ – England’s new attacking philosophy which saw them whitewash New Zealand and beat India earlier this summer – with South Africa captain Dean Elgar unimpressed by both the strategy and the constant questions about how his team would deal with it. But it is South Africa with the upper hand and England require another fightback from a difficult position. Follow the latest score and over-by-over updates from the first Test below.

8th over: Wicket… or is it? Broad seems to find Elgar’s inside edge and a big appeal goes up, as does the umpire’s finger. But Elgar immediately reviews – always a concerning sign for a bowler – and he’s right to, because the faint noise was the top of his pad, not his bat. Ball tracking checks for LBW but the ball was heading over the stumps.

7th over: An attempted leave by Erwee is too late and he inside edges down, luckily, to the ground before reaching Foakes behind the stumps. They run a single and with the next delivery Anderson whistles a brilliant away-swinger past the bat and Elgar’s off-stump almost goes flying. England’s best over yet, but still no breakthrough.

6th over: Broad hasn’t quite found his groove yet; his line is too straight around the wicket which is easy for Elgar to leave outside off-stump. Finally he finds something closer to the stumps and it almost induces an edge from the touring captain, but narrowly misses. A maiden.

5th over: Another half-appeal from behind the stumps but tellingly Anderson is unmoved having pitched the ball outside leg bowling to the left-handed Erwee.

4th over: Erwee clips a beautiful stroke through midwicket to get off the mark with a boundary. The penultimate ball of the over brings a half-hearted shout from Broad but it was bat, not pad, and Erwee adds a single to retain the strike.

3rd over: Just a leg bye as Erwee and Elgar safely navigate Anderson’s probing second over.

2nd over: Elgar drives Broad, bowling around the wicket, through long-off for four, then pushes through the off-side for two more. The final ball of the over offers England’s first sniff of a wicket as Elgar edges towards Potts at fourth slip, but it doesn’t quite carry.

1st over: South Africa captain Dean Elgar leaves the first few – one of which is brilliantly stopped down the leg side by keeper Ben Foakes – before nudging a single through point. Sarel Erwee, another left-hander, sees off the final ball. Stuart Broad will take up the attack from the Nursery End.

Here we go then, England are out in the field and James Anderson has the ball in hand.

Rabada leads South Africa back to the pavilion and holds the ball aloft, to gentle applause. He finishes with 5-52, backed up by Nortje’s 3-63 and Jansen’s 2-30.