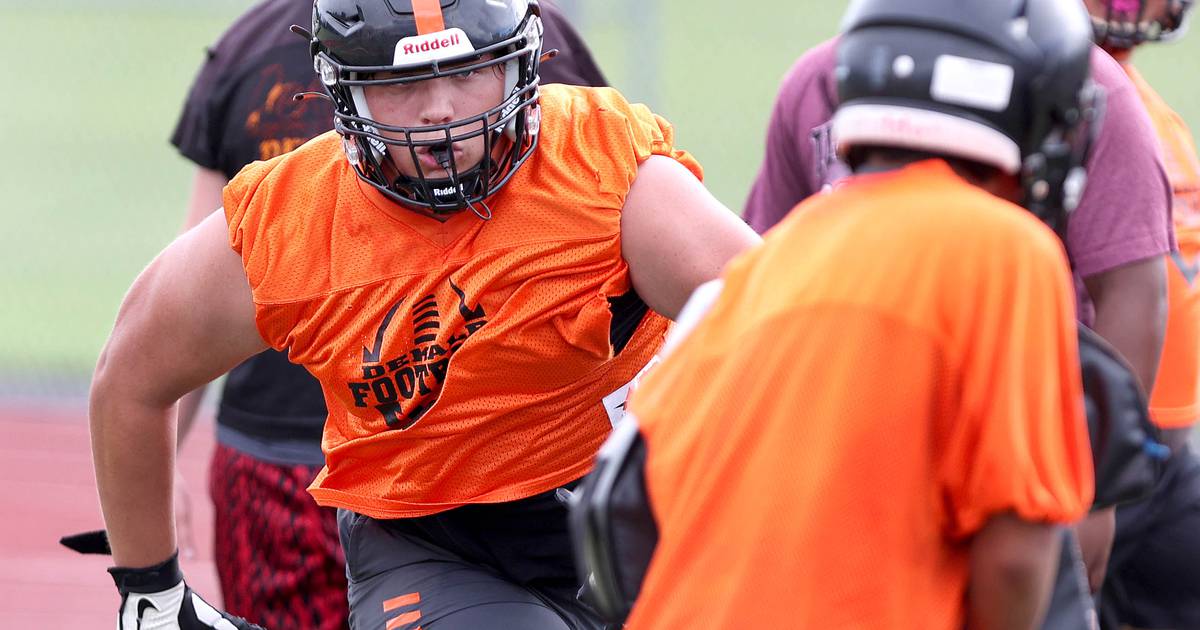 DeKalb at a glance

Keep an eye on: Aiden Sisson, sr., LB. A three-year starter at linebacker, Sisson leads a group of linebackers Schneeman calls the most experienced position on the team. In a conference full of Division I talent, particularly at the skill positions, Sisson provides leadership on and off the field as he looks to repeat his all-conference honors from a year ago.

The Big Idea: Trying to bounce back

DeKalb had made the playoffs seven straight years before the 2-7 mark last year, which was the Barbs’ record the last time they missed the postseason in 2012. But with 13 total starters back from last year and 29 seniors on the roster, Schneeman and the players said that last year is in the past and they are looking to return to the postseason.

“They’ve been in the weight room, working really hard. Many of them since back in November. A lot of them went out for track, pushed themselves to get faster. You’re seeing the results on the field right now. And they’ve worked really hard in June and July. They’ve worked really, really hard all summer. It’s not something we talk about all the time, but it’s in the backs of everybody’s minds. It’s a big factor in motivating us, not having a repeat of last year, turn things around and make a push for the playoffs.”

“Ever since last season ended, we came with a goal. We spent a lot of time in the weight room, a lot of time at practice working on the little things so we can get it right and make it far in the playoffs this year.”

“I feel like we let our fans down, let our program down. This year we have very good potential with our offense, defense, special teams. I’m kind of excited for this year.”

“It’s a close-knit group, they get along really well on and off the field. We have a lot of really good senior leaders. We have 29 seniors, and that definitely helps. A vast majority of those guys have been four-year football players. I feel very good and confident about where we’re at. It’s kind of like night and day. Last year I felt like we were very inexperienced, and this year we have a lot of guys with varsity experience under our belts.”

What else they’re saying

* Schneeman on the team’s experience:

“There’s a lot of advantages to having a veteran group. There’s a lot less install this year. Everybody has a better idea of what they’re doing offensively, where they’re going. It’s led to some better practice. I really like where we’re at right now.”

* Sisson on those advantages:

“We have a lot of returning starters, and we all work well together. We know how each other plays, we know who we can rely on Friday nights. It helps out in the long run.”

* McVicar on the team’s progression in practice:

“Our intensity is high, and our hearts are in it. We’re doing way better than we used to. The last couple weeks were pretty rough. This week we’re doing pretty decent.”

* Schneeman on what the team is capable of:

“I truly think we’re capable of competing at the top end of the DVC. We just have a really strong, close-knit, senior group. … We play a very strong schedule, and we have to bring our A game every Friday night. I know we can compete with everybody that we play. I think we have some big goals for our program, which might be unexpected based on our record last year, but I feel very confident about our group.

All games at 7 p.m. unless noted; an asterisk denotes conference games

Not only is the team experienced, it also is fast. Brown and Tate will split time in the backfield, and Brown also can split out wide into the slot. The receiver spot is loaded with speed, including McCarter, who Schneeman said has been showing out in passing leagues this year. Schneeman said it’s one of the most talented position groups, if not the most talented, with players such as Josh Klemm, Cooper Phelps and Ethan Tierney.

The line remains a work in progress, Schneeman said, but whatever combo of players starts, it will be all seniors. The safeties, Carrington and Tierney, have experience and should anchor and lead in the secondary despite younger cornerbacks. The linebackers are the most experienced group, with Sisson leading the way. The defensive line will feature two-way players such as Hoard and Fabricino but goes very deep.

[ DeKalb focused on revamping energy, playing with a chip on shoulders after 2-7 year ]