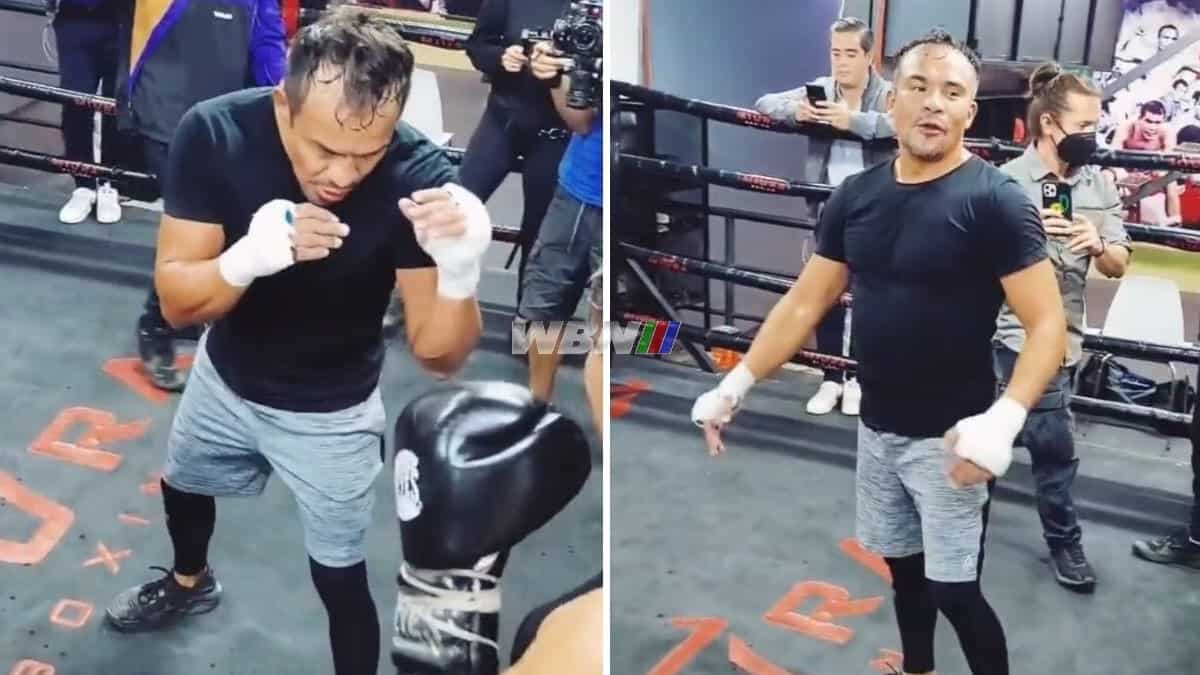 Manny Pacquiao remains alerted for a potential fifth fight with Juan Manuel Marquez as the Mexican is in superb shape.

During the pandemic, his team first showed the eight-weight champion video footage of his arch-nemesis, Marquez. At the time, Pacquiao was still an active fighter.

But now that he’s retired, Pacquiao is again linked to a battle with Marquez and old foe Floyd Mayweather on the exhibition circuit.

Marquez posted via his Instagram account at 46. He looked in tremendous shape for a man of his age. Two years later, “Dinamita” was filmed advising another fighter.

With all the current goings-on in boxing surrounding comebacks, it wouldn’t be a long shot to predict Marquez could be one of them.

He looks fantastic, and Manny Pacquiao will undoubtedly be picking up the phone to offer the Mexican more big bucks.

Pacquiao is still smarting from his sensational 2012 knockout at the hands of Marquez. Since then, massive offers have gotten made to lure the four-weight king into a fifth bout.

Of the previous three bouts before the KO, Marquez was unhappy with the result of at least two and shook his head at the third.

During the latter part of his career, Marquez was only interested in one thing. That was gaining his just deserts from the Pacquiao saga.

The fourth installment had delivered that for JMM. He has since resisted every attempt to lure him back for one more.

Discussing Pacquiao in the past, Marquez has never looked likely to entertain the idea.

“Insist, persist, resist, and never give up,” he said in one offering. “Without challenge, there is no victory,” in another.

The last thing Marquez stated on a potential return to action was: “Never let your guard down.

“The moment will come when you will know when to do the counter-attack!”

Potentially a cryptic clue on his future as the next thing released into the public domain was video footage.

It will interest Pacquiao, who has never stopped wanting another shot at doing what Marquez did to him.

Fans would certainly buy it, even with both men in their forties. Pay-Per-View sales would sell themselves among fight fans of the two legends.

Whether Pacquiao vs Marquez V ever happens is another story. We may have to wait until 2023 even to contemplate it. Pacquiao has his exhibition against a combat YouTuber in December.

For now, Marquez is enjoying his workouts and staying ready for anything as Pacquiao reportedly mulls over one final fight.

If it’s not Conor McGregor or Mayweather, Marquez could earn a lot of money if he listens to what the ‘Pacman’ has to say.

Pacquiao is still pining for revenge. It’s no secret that he’d take the fight however he can get it – even in an exhibition.

The views expressed in this article are the opinions of Phil Jay.