Lakers News: What Jerry Buss Told Phil Jackson About His Decision To Trade Shaq – All Lakers 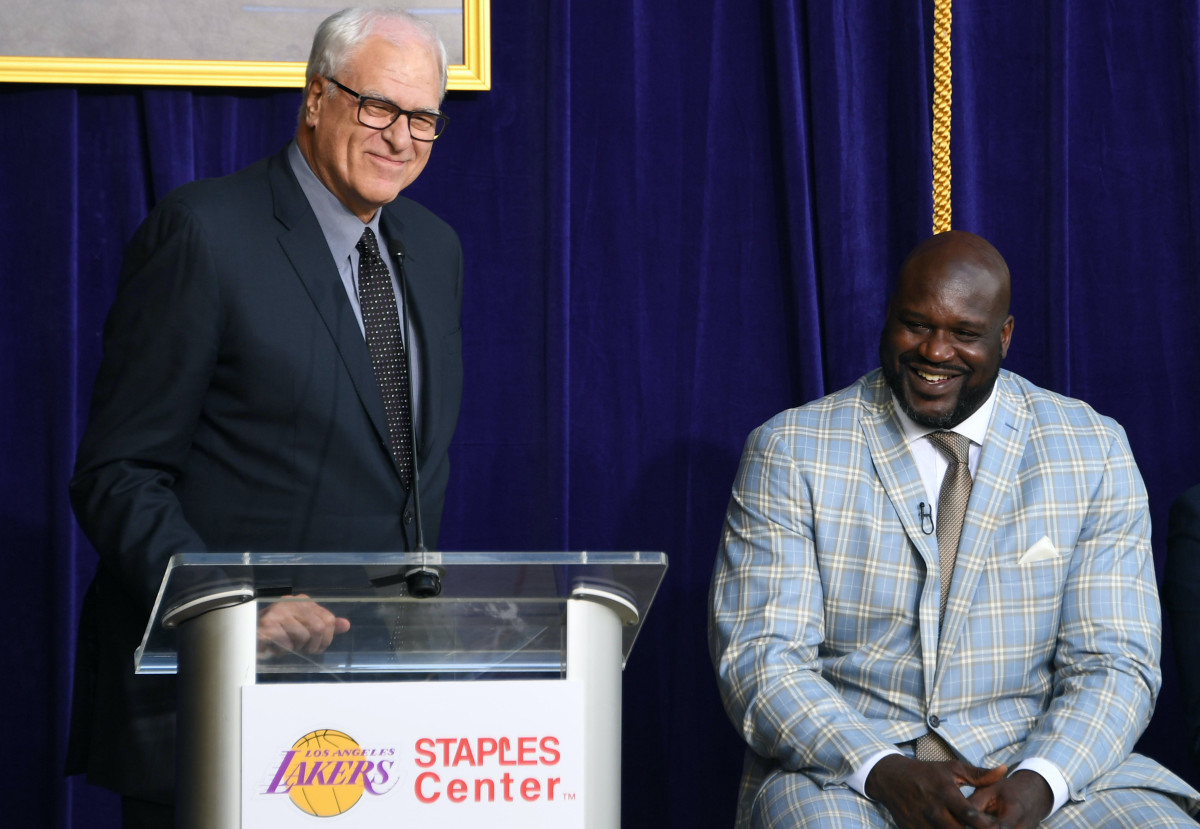 Following the conclusion of a 2004 postseason run that could only be disappointing if you were the Los Angeles Lakers, team owner Dr. Jerry Buss was determined to make a roster shake-up. But not everyone thought he was making the right choice.

Led by All-NBA studs Shaquille O’Neal and Kobe Bryant, the Lakers had won three straight titles from 2000-2002, under the stewardship of head coach Phil Jackson. Their 2001 run through to the championship was particularly bonkers: L.A. lost just one postseason game, the first game of the Finals, wherein that season’s MVP Allen Iverson erupted for 48 points on 18-of-41 shooting. The team’s title run was ended in 2003 by their perennial Western Conference nemeses, the San Antonio Spurs, who vanquished L.A. in a six-game Western Conference Semifinals series. The Tim Duncan-fronted Spurs would go on to wallop the Nets in the Finals to claim their second title in five seasons.

Heading into the 2003-2004 season, the Lakers put together a starting line-up boasting four future Hall of Famers: point guard Gary Payton, shooting guard Bryant, small forwards Rick Fox and Devean George (George took over Fox’s starting slot when Fox injured his foot), power forward Karl Malone and center O’Neal. The team expected to return to its prior winning ways, and in a sense, that happened. L.A. went 56-26 in the regular season, beat the Spurs in the playoffs once again, and returned to the NBA Finals. The team would be upset in five games by the Detroit Pistons and their clampdown defense. Though L.A. had been widely expected to win it all thanks to its starry personnel, being the season’s runners-up was nothing to sneeze at.

Of course, things were not particularly rosy off the court that year, due to a variety of personal and legal issues. Things were so uncomfortable Phil Jackson wrote a book about the eventful time, saving particular vitriol for Bryant, called “The Last Season.”

Bryant and O’Neal traded barbs in the press, and their relationship had deteriorated to the point where moving forward seemed untenable — at least, that’s how team owner Dr. Jerry Buss felt about it.

At the end of the year, Buss resolved to move forward without O’Neal. Shaq would eventually be traded to the Miami Heat in exchange for Lamar Odom, Caron Butler, Brian Grant, and a future first-round draft pick (used in 2006 by L.A. on reserve point guard Jordan Farmar out of UCLA). Top-lined by O’Neal and Dwyane Wade, Miami would become instant contenders, and would go on to win the 2006 NBA title, coached by former Showtime whiz Pat Riley.

In a conversation with Eddie Johnson and Amin Elhassan of Sirius XM NBA Radio, Dr. Buss’s daughter Jeanie Buss, now the owner of the team, recalled the conversation between Jackson and her father, when L.A.’s head coach learned of the decision to offload the Big Diesel.

Here’s a transcription of the anecdote for your reading pleasure:

“When Shaq got traded, that was really hard. I tell the story about how my dad made the decision because he couldn’t pay Shaq the money that he could earn under the collective bargaining agreement, so a trade was coming up. At the end of the season. Phil [Jackson] went to meet my father. He went in and said ,’You can’t trade Shaq, he’s the most dominant player in the league. You can’t trade him.’ My dad said, ‘Well, I am gonna trade him and it won’t matter to you because you’re not coming back as coach either. That’s not your problem.’

So the team was opting to trade O’Neal, then 32 and already dealing with foot issues, and retain Bryant, who would turn 26 before training camp opened.

Keep in mind, Jackson was dating Dr. Buss’s daughter at the time of this exchange, and had just guided the Lakers to four Finals appearances in five seasons, including three straight victories. Jackson would get canned in favor of Rudy Tomjanovich, who had won two straight titles during Michael Jordan’s baseball sabbatical in the mid-’90s.

This was not the first time Jackson, then the NBA’s best coach, at the time was ignominiously dumped. He had been told by Chicago Bulls team president Jerry Krause something similarly heartless on the eve of the 1997-98 season: that even if Phil took the Bulls to an 82-0 record, they would be replacing him with then-Iowa State coach Tim Floyd. Keep in mind, at this point Jackson had won five NBA titles with Chicago, and would go on to win his sixth that very year. Team owner Jerry Reinsdorf claims now that he berated Krause for his approach to Jackson, but certainly seemed to be taking a relatively hands-off approach with his team’s future. Jackon’s replacement with Chicago, Floyd, lasted a shade under three and a half seasons with the team. In their 24 years without Jackson at the helm, Chicago has never returned to the Finals, and has only appeared in the Eastern Conference Finals once.

A similar pattern played out in L.A., only this time, the owner wised up. The new-look Lakers would go on to finish a miserable 34-48 and miss the 2005 playoffs. A cancer diagnosis compelled Tomjanovich to resign midway through the season. The team had a winning 24-19 record at the time, but would stumble under his interim replacement, former Jackson assistant Frank Hamblen. Buss promptly brought Jackson back in 2005. With a core of Bryant, Odom, Pau Gasol and Andrew Bynum, the team would go on to appear in three straight Finals, from 2008-10, winning the last two.