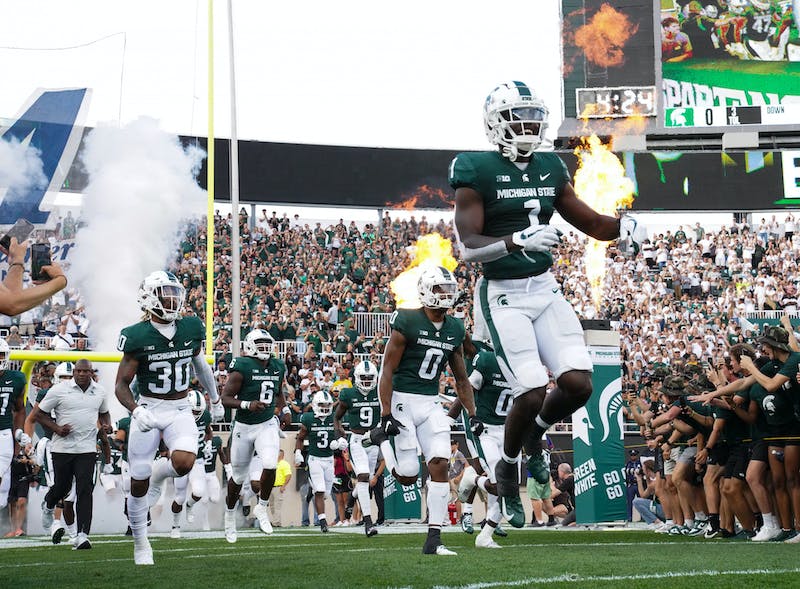 Michigan State football is set to host the Akron Zips this Saturday as the Spartans open up the season with three straight non-conference matchups. This will be the first time the two programs have met since 1914.

The Spartans moved up one spot to No. 14 in the AP Top 25 Poll after defeating Western Michigan 35-13 last Friday. Although they pulled away with a comfortable lead, MSU looked a little shaky on both sides of the ball and lost two defensive assets in junior linebacker Darius Snow and fifth-year safety Xavier Henderson, to injury.

Head coach Mel Tucker is challenging his team to step up the intensity level going into week two in order to solve some of these issues before conference play begins.

“Our overall play was unacceptable,” Tucker said. “We’re just challenging everyone in the organization to, to get uncomfortable and attack this week and we need to get to the next level of our intensity and you need to be ready to prepare to play 60 minutes this week, not 10 or 20.”

What to see from MSU

The Spartans are heavily favored going into Saturday’s matchup. Although Tucker doesn’t like to look past any opponent, MSU will likely use this game to work out the kinks from the first game as well as to see who can fill in the gaps left by Snow and Henderson.

Junior safety Angelo Grose had quite the performance against the Broncos with 11 tackles and will get the chance to step up against the Zips and prove that he can be the one to fill in the gaps in the Spartan secondary.

The secondary also still needs to prove that they have grown from last year’s abysmal season, as there were some drives in which Western was easily able to rely on the passing game to get down the field quickly. With no timetable for Henderson’s return, players like Grose will have to step up to prove that the team’s sore spot won’t be a problem this year.

MSU also didn’t look as sharp as they could have on the offensive side either. Redshirt junior quarterback Payton Thorne threw for 233 yards, resulting in four touchdown passes to four different players, but he also had some uncharacteristic overthrows and an interception.

With the departure of Kenneth Walker III to the NFL, Thorne will have to provide the offensive firepower he had last year, and then some in order to have the type of production to meet their goals as a team.

Thorne appears ready for the challenge and has been working hard this week in practice to improve going into week two.

Akron finished 2-10 overall and 1-7 in the Mid-American Conference last year. They won their first matchup of the season against St. Francis in overtime to open the 2022 season.

The Zips relied on the passing game to lead them to victory, with redshirt junior quarterback DJ Irons throwing for 276 yards and two touchdowns. Although the Spartans are heavily favored, they’ll be facing a quarterback with more experience than Western Michigan’s freshman quarterback and it could give a glimpse into what the MSU secondary is made of before conference play begins.

The Zip defense also appears to have some holes that could allow the MSU offense to try out new schemes and give Thorne another chance to show what he can do.

MSU should have no problems breezing past Akron on Saturday but will need to use the game to boost team confidence as well as fill positional gaps left by injuries.