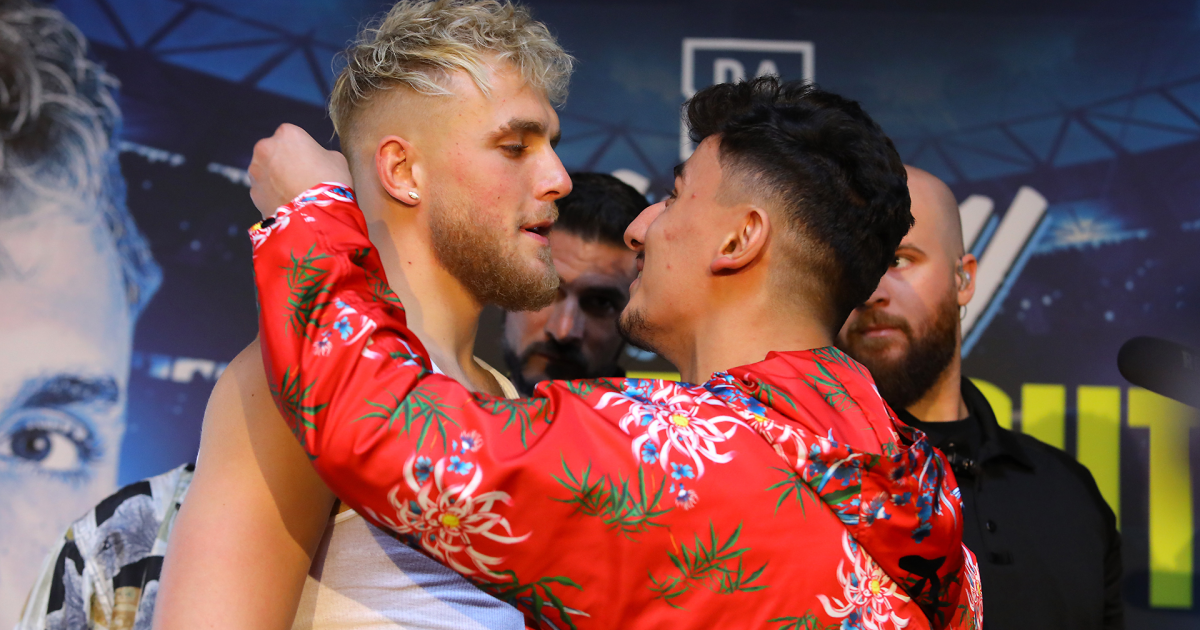 AnEsonGib has competed in numerous boxing fights — amateur, exhibition and professional — over the past few years. He will be competing in another bout on Sept. 10, a faceoff against fellow YouTuber Austin McBroom.

The fight will be held at Banc of California Stadium in Los Angeles and contested under McBroom’s Social Gloves platform. AnEsonGib is used to facing YouTubers, most notably Jake Paul. In 2020,  AnEsonGib fought Paul on a Matchroom Boxing-led card headlined by Demetrius Andrade vs. Luke Keeler. While the fight didn’t go his way, AnEsonGib is hoping he has learned from that fight.

The Sporting News looks back at the AnEsonGib-Paul fight. How did Gib fair against “The Problem Child”?

MORE: Is the influx of YouTubers good for boxing?

What happened in Jake Paul vs. AnEsonGib boxing fight?

The fight started off hot as the YouTubers did not touch gloves before the opening bell. That was a product of a fight week that included plenty of trash-talking.

Both swung wildly at one another. AnEsonGib attempted to get low to make it impossible for Paul to strike him down. Paul connected with a few jabs to AnEsonGib’s face. One right hand later, and AnEsonGib was down. A few moments later, a left hook took AnEsonGib down to the canvas.

AnEsonGib was able to land a right to Paul’s nose and bloody him. AnEsonGib could not take advantage, however. One right hand by Paul later, and AnEsonGib was down on his knees. The referee stopped the fight immediately after.

KSI came into the ring once it was all over. He helped plant the seed for a potential fight against Paul.

In 2018, AnEsonGib competed on a boxing card headlined by KSI and Joe Weller. He defeated Maxplaysfifa via second-round knockout. His next fight was on the undercard of KSI vs. Logan Paul at Manchester Arena in England. AnEsonGib won via unanimous decision in a four-round bout.

After the Paul fight, AnEsonGib competed on the undercard of McBroom’s YouTubers vs. TikTokers boxing event in 2021 against Taylor Holder. The result was controversial as the bout was declared a majority draw. AnEsonGib said he was “robbed.” The draw was later overturned and AnEsonGib was given a unanimous decision win.

When is Austin McBroom vs. AnEsonGib?

Austin McBroom vs. AnEsonGib will take place on Sept. 10. The main card will begin at 9 p.m. ET | 2:00 a.m. BST | 11 a.m. AEST. McBroom and AnEsonGib should make their way to the ring around 12 a.m. ET, depending on how long the undercard fights last.

How to watch Austin McBroom vs. AnEsonGib

Fans can watch Social Gloves: No More Talk on SocialGloves.tv

You can also watch the fight on FITE.tv and all pay-per-view formats.

Austin McBroom vs. AnEsonGib PPV price: How much does the card cost?

You can purchase the event for $39.99 across all platforms.