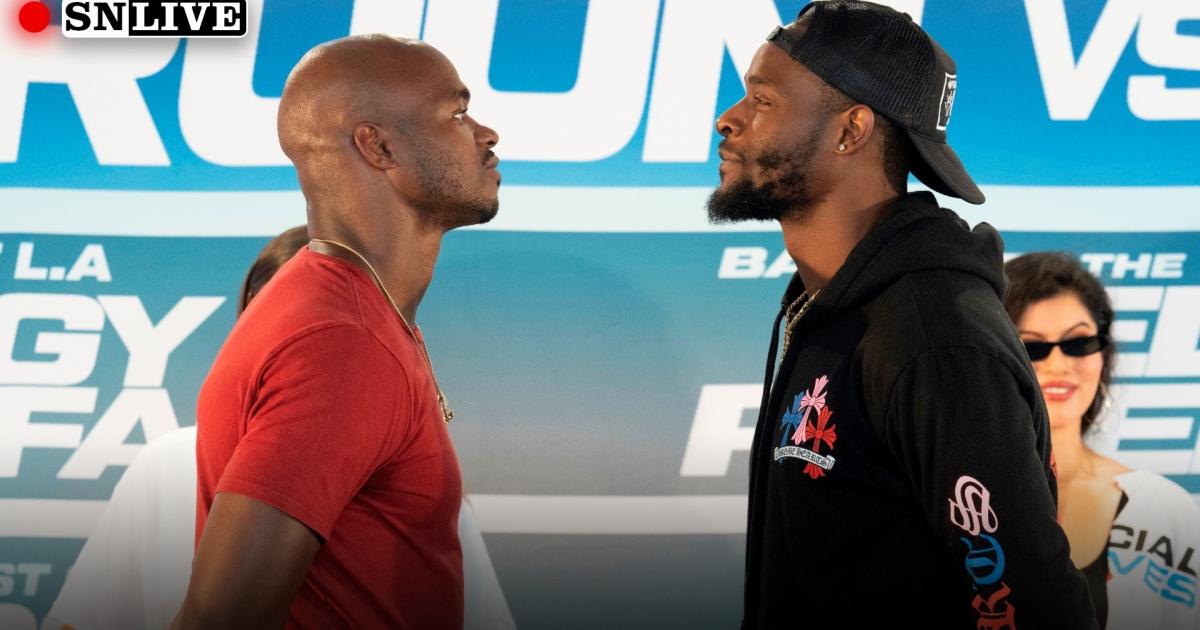 Adrian Peterson and Le’Veon Bell are trading shoulder pads for boxing gloves as they get set to duke it out inside the ring.

The co-main event under Austin McBroom vs. AnEsonGib, Saturday’s fight will take place inside Banc of California Stadium in Los Angeles.

Peterson was drafted by the Minnesota Vikings in 2007. A seven-time Pro Bowler, Peterson holds the NFL record for being a three-time NFL rushing yards leader. He also set an NFL record as a rookie for the most rushing yards in a single game (296). The 2012 MVP has since played for the Saints, Cardinals, Redskins, Lions, Titans, and Seahawks.

MORE: How to bet Bell vs. Peterson

Looking to prove his worth off the field, Peterson has taken training for this fight seriously.

Bell is a three-time Pro Bowler. Following five years as a Pittsburgh Steeler, Bell refused to sign a franchise tag and did not report to Steelers camp or any subsequent games. Bell then played for the Jets, Chiefs, Ravens, and the Buccaneers.

The Sporting News will be providing live updates from the Bell vs. Peterson fight. Stay tuned!

1:05 a.m.: We’ve got some action! Le’Veon Bell took a bit of a tumble in the second round. Although it looked more like he may have just tripped.

1:04 a.m.: As the announcers said at the end of the round: “nothing.” Not a whole lot happened in this first round. No real big punches, no one really got hit. I wish I could provide more information, but that was an extremely lackluster round of boxing.

1:03 a.m.: The broadcasters point out that Adrian Peterson still has a desire to return to the NFL after this boxing match. AP says he’d want to play for the Bills, Rams, or 49ers.

1:02 a.m.: Le’Veon Bell is somehow having an issue with his mouth piece. His trainer can be heard shouting towards him to bite down on it to keep it in place.

12:55 a.m.: Le’Veon Bell and Adrian Peterson are now making their walks to the ring.

12:52 a.m.: In a promotional video for the fight, Adrian Peterson said the biggest difference between the two sports (football and boxing) is the time. He says a play in the NFL will last only around five-to-six seconds whereas a round in boxing in three minutes.

12:50 a.m.: Le’Veon Bell says he’s not only planning to prove he’s the best running back turned boxer, but that he’s: “One of the better boxers there is in this world.” And when asked if he plans to continue boxing as his primary career, he responded, “Absolutely. This is what I’m going to do.”

12:44 a.m.: The fight between Landon McBroom and Adam Saleh is over, which means the fight between former NFL running backs is up next! Should be around 10-15 minutes until it starts.

12:29 a.m.: The third fight on the main card has started between Landon McBroom and Adam Saleh.

12:12 a.m.: The fight between Cory Wharton and Chase Demoor concluded. It was an exhibition fight, so there’s no official winner. Only one fight to go before we get to Le’Veon Bell vs. Adrian Peterson.

11:56 p.m.: The second fight on the main card has started between Cory Wharton and Chase Demoor.

11:41 p.m.: The first fight has concluded with Abimbola Osundairo as the winner. We’re now just two fights away from Le’Veon Bell vs. Adrian Peterson.

11:29 p.m.: Le’Veon Bell and Adrian Peterson are both getting ready for their boxing debuts.

11:10 p.m.: The undercard fights have all been completed. The main card is up next. There are three fights ahead of the match between Le’Veon Bell and Adrian Peterson.

Who will win the Battle of the Running Backs?

Adrian Peterson and Le’Veon Bell step inside a boxing ring tonight for the first time ever! #BellPeterson | #McBroomGib pic.twitter.com/YF8Zh5eYn8

When is Le’Veon Bell vs. Adrian Peterson?

How to watch Le’Veon Bell vs. Adrian Peterson

Fans can watch Social Gloves: No More Talk on SocialGloves.tv

You can also watch the fight on FITE.tv and all pay-per-view formats.

Le’Veon Bell vs. Adrian Peterson PPV price: How much does the card cost?

You can purchase the event for $39.99 across all platforms.