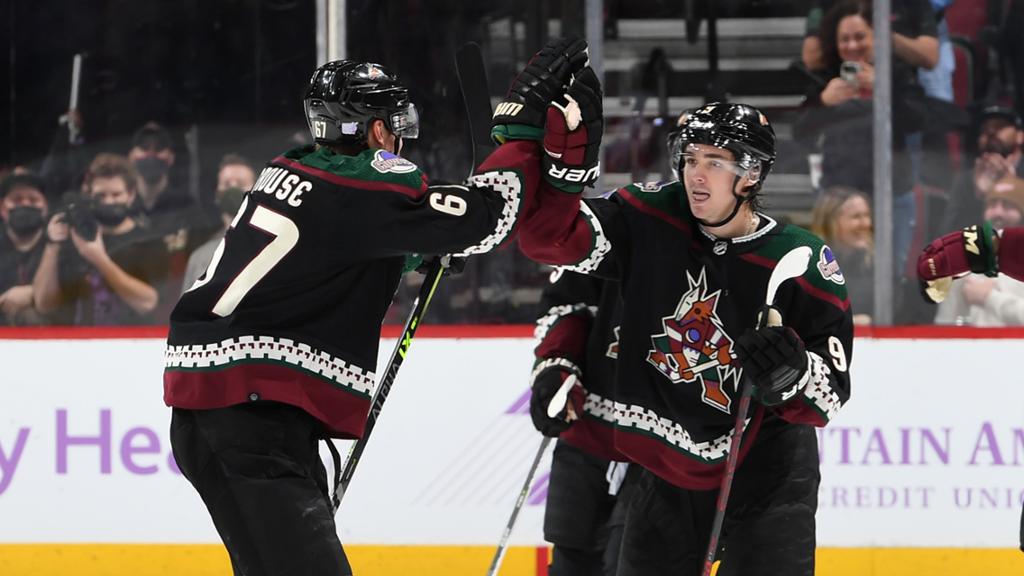 The 2022-23 NHL season starts Oct. 7. With training camps opening soon, NHL.com is taking a look at the three keys, the inside scoop on roster questions, and the projected lineup for each of the 32 teams. Today, the Arizona Coyotes.

The Coyotes are deep into a rebuild with a focus on drafting and player development. There are also reasons they can be better than finishing 31st in the NHL last season, ahead of only the Montreal Canadiens. Arizona is hoping Clayton Keller will be ready by the season opener at the Pittsburgh Penguins on Oct. 13 following surgery for a broken leg sustained March 30, ending a season when the forward scored an NHL career-high 28 goals in 67 games.

Jakob Chychrun, a subject of frequent trade rumors, scored seven goals after leading NHL defensemen with 18 in 2020-21 and has three seasons remaining on a six-year contract he signed Nov. 13, 2018. Even if Keller scores 30 goals and Chychrun returns to form (and is not traded), it won’t be nearly enough if Nick Schmaltz and Lawson Crouse don’t provide secondary scoring and at least one prospect produces with significant ice time in the NHL.

The Coyotes goalie pipeline isn’t NHL ready, which leaves a heavier workload for Karel Vejmelka. The 26-year-old, who was a fifth-round pick (No. 145) by the Nashville Predators in the 2015 NHL Draft, finished second among rookies in games (52) and starts (49) behind Alex Nedeljkovic of the Detroit Red Wings (59 and 52), tied for fifth in wins (13) with Dan Vladar of the Calgary Flames in wins and was eighth with an .898 save percentage (minimum 10 games).

The Coyotes will play 20 of their first 24 games on the road and the odds of a fast start are long. Their first three games are against Stanley Cup Playoff teams (Penguins, Boston Bruins, Toronto Maple Leafs) from last season. They have four home games from Oct. 28-Nov. 3 before a 14-game road trip from Nov. 5 to Dec. 7 thanks to $20 million in renovations of Arizona State University’s new multipurpose arena, their home ice for at least the next three seasons.

The opportunity is there for forward prospects Jack McBain, Nathan Smith, Matias Maccelli and Jan Jenik, and defenseman prospect Victor Soderstrom, to break training camp with the Coyotes. McBain, 22, might start as the fourth-line center. He ended his career at Boston College with 33 points (19 goals, 14 assists) in 24 games as a senior and had two goals and one assist in 10 games for the Coyotes following a trade from the Minnesota Wild on March 21 and signing a two-year, entry-level contract two days later. Travis Boyd, Nick Bjugstad and Barrett Hayton enter camp ahead on the depth chart, a storyline that will be fluid depending on McBain’s development.

The Coyotes need a bit of everything and hope Bjugstad provides versatility, experience and leadership to a team without a captain since Oliver Ekman-Larsson was traded to the Vancouver Canucks on July 23, 2021. Bjugstad signed a one-year contract July 13 after he had 13 points (seven goals, 13 assists) for the Wild last season. The 30-year-old forward played 57 games last season, his most since playing 64 in 2018-19 (32 each for the Florida Panthers and Penguins), because of multiple groin surgeries and back surgery.

J.J. Moser is set to challenge for major minutes in his first full NHL season, especially if the Coyotes trade Chychrun or Shayne Gostisbehere, a pending unrestricted free agent. Moser, a 22-year-old defenseman, could be another building block after Dysin Mayo, a fifth-round pick (No. 133) in the 2014 NHL Draft, emerged last season on the top pair with Gostisbehere. Though Moser was minus-10 with 24 turnovers in 43 games, he blocked 55 shots and had one goal and one assist in his last four games while averaging more than 21 minutes. The second-round pick (No. 60) in the 2021 NHL Draft was expected to contribute, just not this quickly.

Ready to break through

Crouse signed a five-year contract Aug. 8 following NHL career highs of 20 goals and 34 points in 65 games. The 25-year-old was a restricted free agent and avoided a salary arbitration hearing by choosing stability in Arizona. He’s projected for big minutes at second-line left wing, which could produce better numbers over 82 games.

Schmaltz, C/RW (fantasy average draft position: 173.2) — He nearly had a point per game for the Coyotes last season (NHL career-high 59 in 63 games), including seven points on March 5 (most in NHL in single game since Sam Gagner had eight for Edmonton Oilers on Feb. 2, 2012), and remains a fantasy sleeper candidate with usual linemate Keller (tied with Schmaltz for Arizona’s lead with 0.94 points per game). — Pete Jensen