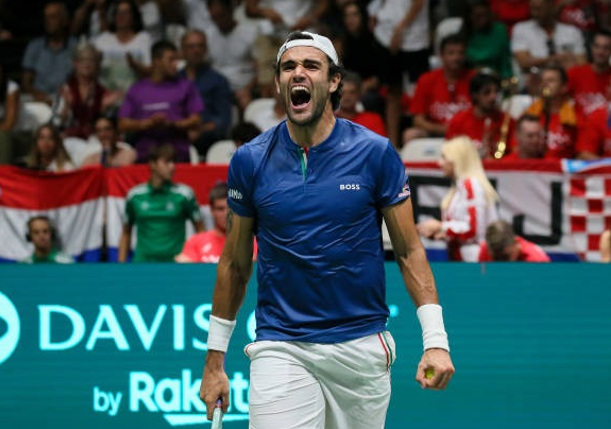 Today, Berrettini made a winning homecoming.

“It felt amazing. Yeah, I’m really happy that I had the chance to do it,” Berrettin said afterward. “Last year was tough to miss the Finals, obviously. Then the Davis Cup in Turin.

“Obviously I wanted to bring the point, but mostly I wanted to enjoy every single point out there. Yeah, unbelievable atmosphere. I felt the support. I had to miss also Rome this year, so I missed the Italian crowd. I’m so happy I brought the win as well.”

Earlier, Lorenzo Musetti staked the home side to a 1-0 lead dispatching Borna Gojo 6-4 6-2.

“I think the crowd is pretty special. I mean, it’s really an honor for me to share the court with my teammates, I mean, to be the first winner from Italy in this event,” Musetti said.

Italy is aiming to capture its second Davis Cup championship and first since 1976.