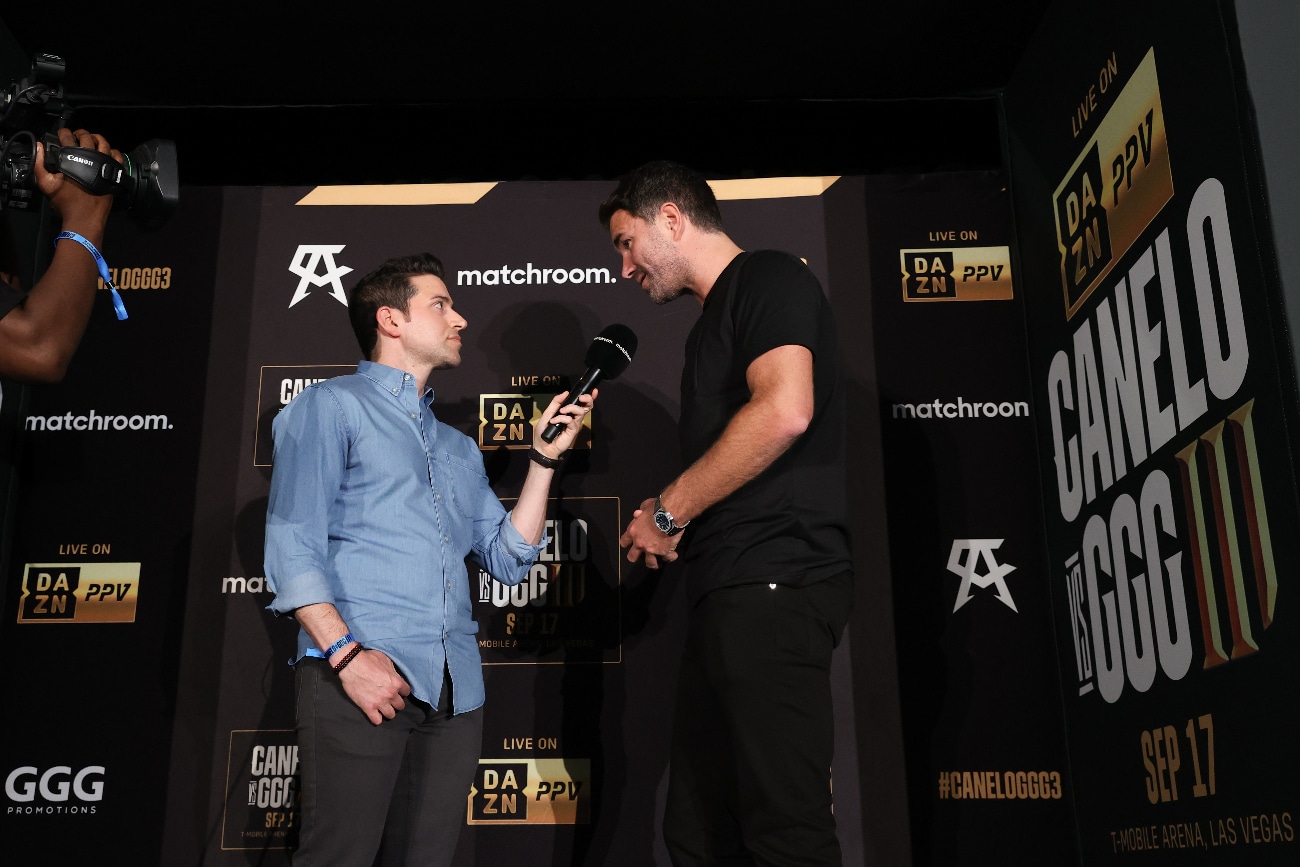 By Robert Segal: Eddie Hearn says the $85 pay-per-price for this Saturday’s trilogy between Canelo Alvarez and Gennadiy Golovkin on DAZN is justified because it’s the biggest fight in boxing.

For some fans, it’s hard for them to get excited about paying $85 for a fight with Canelo (57-2-2, 39 KOs) coming off a loss to Dmitry Bivol and Golovkin looking old & feeble against Ryota Murata.

U.S fans have been grumbling about the price for the Canelo-Golovkin III fight, as they don’t feel it’s worth paying that much for an outdated contest that is past its sell-by date.

Interestingly, Hearn is predicting one million pay-per-view buys for Canelo-Golovkin III. You can’t fault Hearn for being optimistic, but it’ll be surprising if the buy rate is anywhere close to that number. Even if the price were a more manageable $60, it’s a tall order to bring in one million buys.

People would rather pay to watch Canelo fight Jermall Charlo or David Benavidez on pay-per-view rather than 40-year-old Golovkin.

Golovkin has fought only a handful of times in the last four years against weak opposition, and his popularity has arguably plummeted.

Some would say that the huge fan base that Golovkin once had disappeared due to the way he stopped fighting elite opposition after his loss to Canelo in 2018.

“The media obligation has been huge this week, and the head-to-head. They’re ready to fight and give us one of the greatest fights of our generation,” said Eddie Hearn to iFL TV about Canelo Alvarez and Gennadiy Golovkin.

“I think he’ll really compete on Saturday night, and it’ll be a really close fight. It’s already tracking for huge [pay-per-view] numbers. The undercard’s fantastic. We’ve got the undercard tomorrow.

“Wait until you see the scenes outside of the T-Mobile. I’m sure they’ll come together one last time. It’s going to be huge numbers on Saturday. No one can ever deny Canelo-GGG is a pay-per-view fight.

“It’s been pay-per-view before, and it’s done over a million buys both times. It’s the biggest fight in boxing. What I’m talking about is people keep putting on pay-per-view events at 60, 70, and 80 pounds.

“You’re going to get fights like Canelo-Golovkin, that are standout pay-per-view events, and that won’t change.

“Don’t forget, he’s shared 24 rounds with Canelo Alvarez. He knows how to fight him. It’s not as if he’s going in there, ‘Is he good enough to compete?’ We know he can compete.

“The rivalry is probably the best rivalry in boxing of this generation, and they’ll go and do it all again on Saturday night.

“They’ll kick off where they left off from the 12th round of #2, and I think Canelo Alvarez will come forward all night, and so will Gennadiy Golovkin. I think they’ll have an absolute war.

“I don’t see it going 12 rounds this time, but I could be wrong because they’ve both got granite chins. It’s going to be a brilliant fight,” said Hearn.

“I wonder if they tried to keep a lid on it today, especially because I feel that Gennadiy Golovkin wants Canelo to lose his emotions in this fight,” said Hearn about the peaceful final press conference today. “He wants him to be reckless, and I think he will be reckless.

“I think he’s going to take chances in this fight, but at the same time, you can’t be too reckless against Gennadiy Golovkin. The way that he boxed in the second fight was a surprise to everyone, quite honestly.

“I think he’ll fight the same way, and that’s why we’ll get an amazing fight. I don’t think the number of pay-per-view buys you do necessarily dictates the scorecards. Of course, when you have a whole arena cheering for you, that can in a close round.

“That’s the benefit of being home and away in terms of bringing fighters to your backyard. Ultimately, both fights were very, very close. I had Canelo Alvarez winning the second fight. The first fight was very close. I had it a draw.

“You can easily give an argument for Gennadiy Golovkin in that fight and Canelo Alvarez. But that was a very close fight. I thought the fight that Canelo Alvarez boxed in the second fight was outstanding.

“Nobody expected him to fight like that. It’s how you score a fight. I think this fight is going to be very close. I think up at 168 pounds is really going to suit Gennadiy Golovkin,” said Hearn.