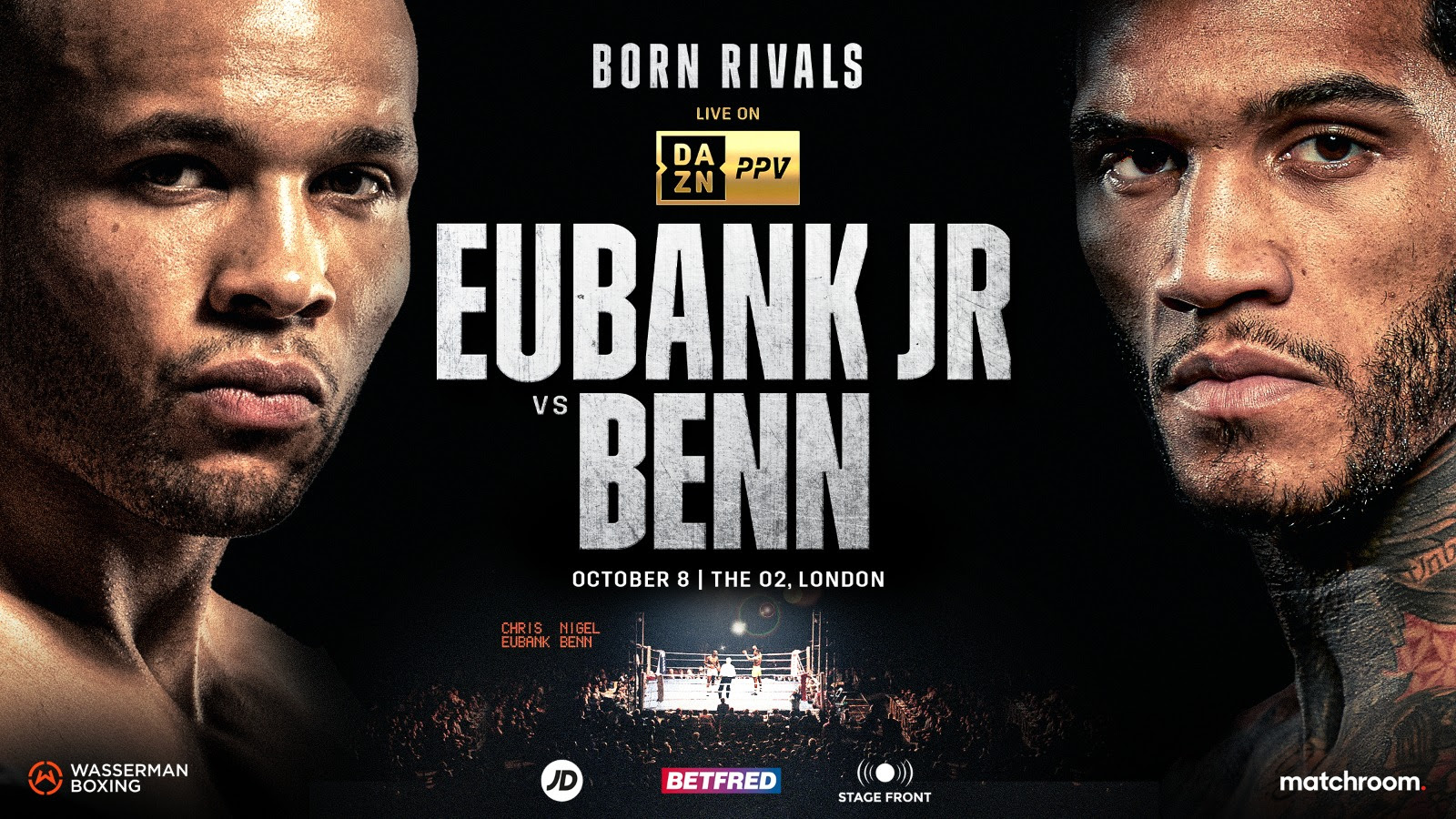 By Charles Brun: Chris Eubank Jr has reiterated that he’s going to hang up his gloves if he loses to Conor Benn on October 8th in their 157-lb catchweight fight.

Even though Eubank Jr (32-2, 23 KOs) admits that he’ll only be 60% for the fight due to the rehydration clause and 157-lb strength-draining catchweight attached to the contest, he still feels that a loss to the 25-year-old Benn (21-0, 14 KOs) would signal that he’s not the fighter that he thought he was.

More importantly, a loss to the welterweight Benn would indicate that Eubank Jr lacks the talent to challenge WBC middleweight champion Jermall Charlo, IBF/WBA champ Gennadiy Golovkin or WBO champion Janibek Alimkhanuly because those fighters wouldn’t lose to him.

Benn would be out of his element against Golovkin, Charlo & Janibek, even with a rehydration clause & 157-lb catchweight. Those fighters are bigger, stronger, and far more experienced.

Benn’s lack of experience could prove to be his undoing against Eubank Jr because he’s still never fought an actual contender during his career.

While we’ve heard from Benn’s promoter Eddie Hearn about wanting to match him against Jaron ‘Boots’ Ennis, and Keith ‘Thurman, it’s not happened. Instead, Benn has been matched against older guys that lacked the power & youth to beat him.

Eubank Jr vs. Benn will likely be a sick mismatch because there’s too wide of a gulf between them in terms of experience and natural size. If Benn had consistently matched against contenders at 147 instead of godawful opposition, you could say that he had a sporting chance of beating Eubank Jr, but that hasn’t been the case.

Benn has been matched against dreadful fighters one after another, and is now going up against one of the best middleweights in the division. The end result of a match like is pretty obvious. Benn stands no chance of winning, and he’s going to look pathetic getting beaten like a drum by Eubank Jr on October 8th.

“He’s six or seven pounds over. So he’s 163 or 164 pounds now,” said Eddie Hearn to Secondsouts about Conor Benn. “I said, ‘Blimey, remember when you used to make 147?’ ‘Jesus, I don’t know how I did that.’ Obviously, he’s been training in a specific way.

“For me, I want to see him win world championships at 147,” Hearn said when asked where does Benn go if he defeats Eubank Jr. “But this is a once-in-a-lifetime fight, one of the biggest fights we’ve ever been involved in that he wants and the British public wants. We’re going to have a great night next Saturday.

“We’ve got to enjoy this moment, but yes, 147 pounds is where I see his future. I don’t think anyone complains about a Fury-AJ or Benn-Eubank on pay-per-view. They are specific one-off events for the platform [DAZN]. But if they didn’t have the capability & functionality, they wouldn’t be able to attract those fights.

“So it gives them that functionality and makes them very competitive in the mega-fight space, but certainly not the model. I’m under no pressure to ‘give us more pay-per-views.’ Certainly, if there’s a mega-fight, we have the ability to do it.

“I just want to get in there and prove myself,” said Conor Benn to Good Morning Britain. ”

“60%. I have this weight that I have to make that I’ve never made my entire career. There’s also a rehydration clause. I can’t be over a certain weight,” said Chris Eubank Jr.

“There’s a huge amount of pressure on me for this fight. I’ve said it before. If I lose this fight, I retire. I don’t want it to end. Because losing to Conor Benn at this stage in my career means, I’m not the fighter that I thought I was and that I think I am,” said Eubank Jr.