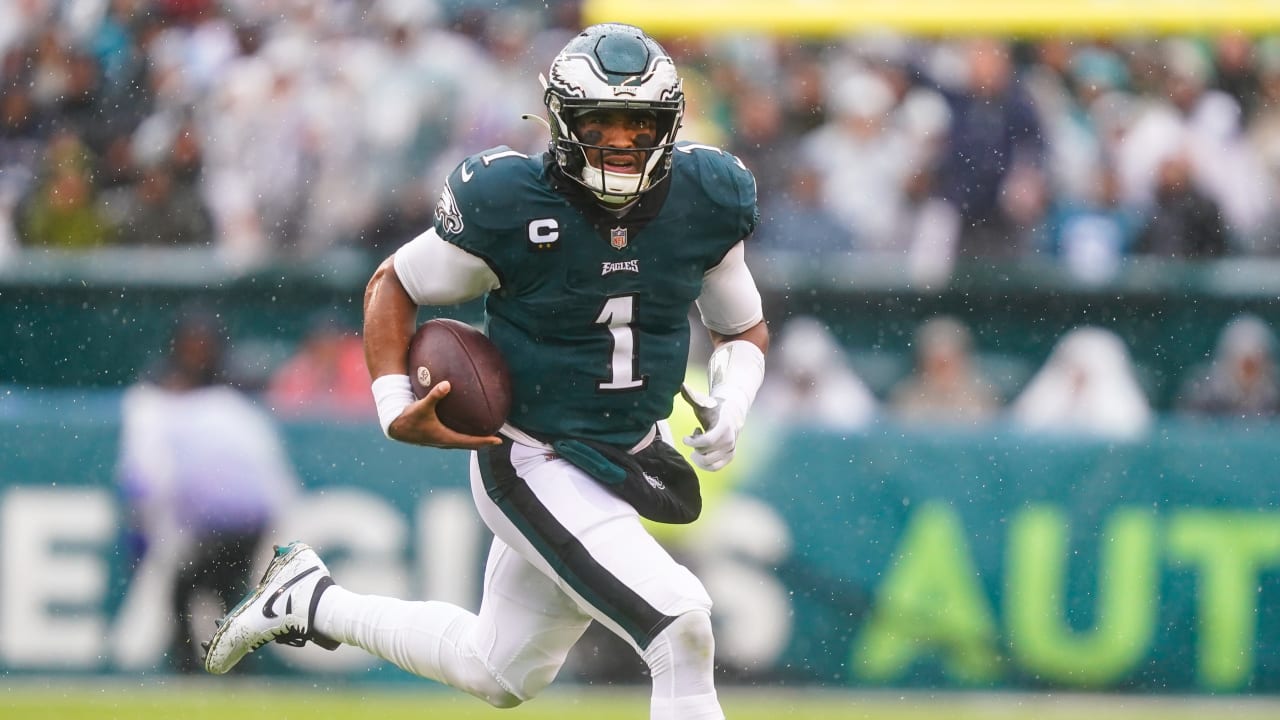 I can’t think of another young quarterback who’s gone through more ups and downs between college and the NFL than you (Hurts lost his starting job at Alabama to Tua Tagovailoa, became a Heisman Trophy finalist in his final college season after transferring to Oklahoma and didn’t become a full-time starter in Philadelphia until the Eagles traded Carson Wentz prior to the 2021 season). How have you been able to stay focused and improve through all that?

I can’t tell you another guy who’s endured what I’ve endured. But that’s also what makes me who I am. I think that’s what makes me different. I feel like the fact there’s nobody else who can really relate to that, I’m built for it. Regardless of what’s in the way, I’ll find a way in the end with diligence and patience. It’s tough. It’s not easy. It’s just the mental makeup you have in terms of how you want to tackle a situation. There’s probably been a few different negatives throughout the times, but I’ve always found a way to turn those into positives and come out on top in the end.

Dallas Goedert talked about working out with you in California with the other receivers and really seeing the growth in you. I know you trained with (respected quarterbacks coach) Tom House in the summer. What did you do this offseason that had the biggest impact on your play today?

The biggest thing I did this offseason was the time in OTAs. Getting A.J. up here. Getting on the grass. Going through seven-on-seven. Mental makeup of the offense and what we wanted it to look like in the passing game. That was big.

I interviewed Tom Brady (who’s also a client of House) when he first started playing in New England and we talked about how he went through his own adversity at Michigan, including splitting time his senior year with a top recruit. One thing he said that always stuck with me was that you never give anybody a reason to take you out once you have a chance to play. How does that compare to the way you operate?

He split time as a senior after being the full-time starter as a junior, and it was a major factor in him winding up as a sixth-round pick. I’ve heard you talk about how this is your offense now. Is your mindset similar to that because of the adversity you’ve faced?

Not from that viewpoint. I will say this is the first time I’ve ever heard that story. … That’s crazy to me. I have a lot of the same energy, just in terms of how important it is to stay steadfast and disciplined on what I’m supposed to do. He’s the greatest quarterback to play this game. I have a lot of respect for him as a player and his history of how he got to this point. That’s a great foundation for a guy like me.

I bring him up because I hear people talk about your relentless work ethic and the way you approach the game. His mindset as a young player was that nothing was going to be given to him. How does that compare to your approach?

It’s always been that way. When I went to Alabama, I wasn’t supposed to be the guy. Everybody else was the No. 1 quarterback in the country in their class. I was just a four-star guy from Texas, dual-threat and a little different from everyone else in the room. But I believed in myself, and the rest is history. I feel like it’s all in the preparation. Sorry — I’m still kind of blown away by the Brady stuff. But I think it’s all in the preparation. I feel like wherever it’s been or what it’s looked like, I’ve been able to make it my own. It’s a testament to everybody on offense here, as far as how we’re doing. Everybody staying together as one and growing together. It’s really nice to have a group of guys like Quez Watkins, Dallas Goedert, Smitty (DeVonta Smith), A.J. and Miles Sanders. We all graduated high school around the same time. For us to be able to experience this together, that’s creating value and forming what’s to come. It’s a journey. … If I can stake claim to anything in this offense, that’s what I want this offense to be about, just the constant climb and growing and trying to build. It’s beautiful to experience all this stuff together and know there’s still more out there for us.

The identity of this offense — and even this team — feels a lot like your identity, in that it doesn’t really matter how it looks as long as the results happen. How accurate is that?

I agree with that. It can look a number of different ways. We all know how it went last year toward the end of the season. We were very efficient in the passing game, and we ran the ball so well. In Week 1 (this year) I ran for almost 100 yards and Miles ran for 100 yards and A.J. had a big game. Then (in Week 3) Smitty has a big game and A.J. has 80 yards. It looked different. We’re so selfless here. That’s my mentality and I want that to be the mentality of not only the offense but the team. We’re doing this together. That’s what it’s about.