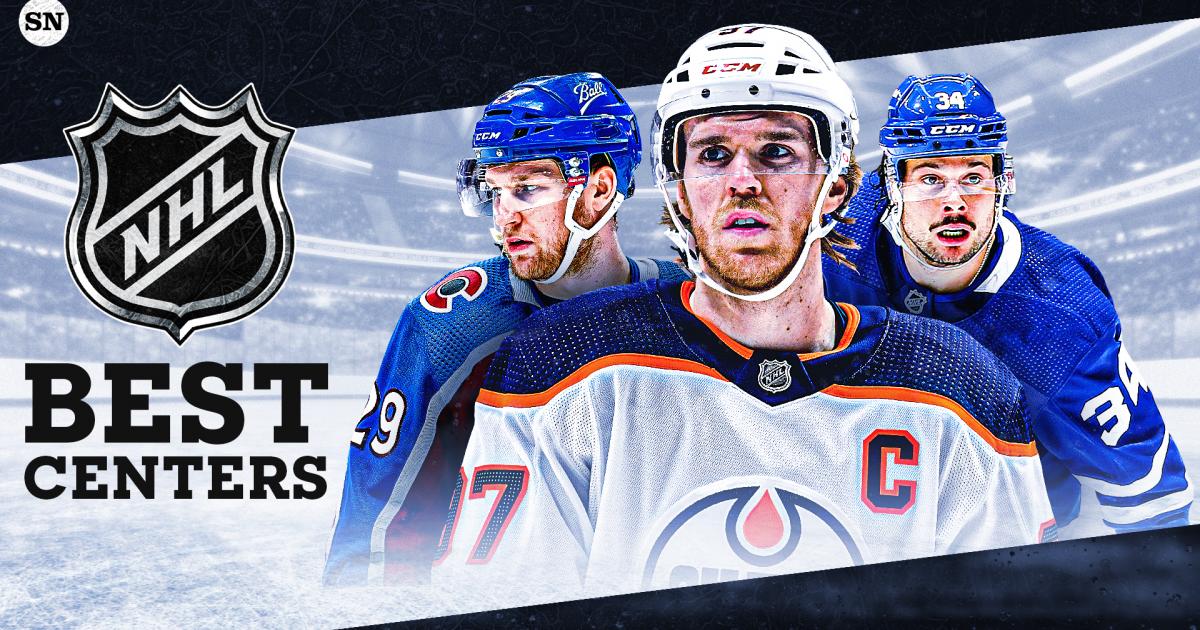 In the game of hockey, centers are asked to do a lot. They have to take faceoffs, be responsible in the defensive zone and also act as a driving catalyst off the rush.

So it should come as no surprise that some of the greatest players to ever play the game are centers. Wayne Gretzky, Mario Lemieux, Mark Messier, Steve Yzerman, Joe Sakic — all centers. It’s no different in today’s NHL either.

Having an elite center is a key piece for a team being a championship-caliber club. Just look at the past Stanley Cup winners. The Avs had Nathan MacKinnon, the Lightning had Steven Stamkos and Brayden Point, the Blues had Ryan O’Reilly, and so on and so forth.

There is a plethora of elite centers in the NHL, ranging from veterans who have been getting it done for over a decade to young players who have broken onto the scene and stolen the spotlight.

With that, The Sporting News ranks the top 20 centers in the league heading into the 2022-23 season.

McDavid enters the 2022-23 season coming off his second consecutive Art Ross win and fourth in his career. He’s aiming to secure 100 points for the third-straight year and the seventh time in his NHL tenure. McDavid is the best player on the planet right now and there’s no surprise he tops the centers list.

McDavid may be the best player, but the best goal scorer right now is Matthews. He’s won back-to-back Rocket Richard Trophies, becoming the first player to score 60 goals in a single season since Steven Stamkos back in 2011-12. Matthews’ lethal shot release makes him dangerous from everywhere on the ice.

Finally, MacKinnon is a Stanley Cup champion, as the 27-year-old helped lead the Avalanche to the Stanley Cup. Despite only skating in 65 games, MacKinnon put up 88 points for Colorado. He has the hands, he has the speed, he has the shot and he most definitely has the passion. MacKinnon is the complete package and one of the most exciting players to watch.

While McDavid gets a good amount of the shine in Edmonton, he’s got a really good center playing behind him in Draisaitl. McDavid sets up a ton of the plays that Draisaitl ends up finishing, especially on the power play. The German hit 50 goals for the second time in his career last season and tied his career-high in points with 110. He’d be the top-line center on almost any other team in the league.

Don’t be fooled, Crosby still has it. He may no longer be racking in the awards like he was in his prime, but he is still one of the best centers in the league. The Pittsburgh captain hit 84 points last year despite missing 13 games with injury. With the Penguins bringing back Evgeni Malkin and Kris Letang, Crosby and Co. are aiming to win another Cup with the core group.

It’s been a couple of seasons now that Barkov has finally got the recognition he deserves. The 2021 Selke Trophy winner posted a career-high 39 goals last season, helping the Panthers to the best record in the regular season. The 27-year-old Finn is a premier two-way center that has been a big reason for Florida’s emergence as a contender.

Age is but a number for Bergeron. After potential retirement rumors swirled around the long-time Bruins center, Bergeron comes back to Boston on a one-year deal after winning his fifth Selke Trophy, passing Bob Gainey for the most all-time. He continues to be among the elite two-way forwards in the league.

MORE: Who are the rookies on the cusp of earning a roster spot?

Stamkos had a career emergence last season, registering a career-high 106 points for Tampa Bay. It comes after two seasons where Stamkos was not producing at his typical high level and battling injuries. He still possesses one of the best one-timers in the league and is always a threat on the power play.

Aho has climbed the ranks among the NHL’s elite over the last couple of seasons. He has solidified himself as the top scorer on the Hurricanes and has been right around a point-per-game player for the previous four seasons, coming off an 81-point campaign. The Finn is a great all-around player who has a knack for making plays in the opponent’s zone.

Rangers fans can thank the Senators every day that Zibanejad is on the New York roster. The 29-year-old Swede is coming off his best season yet with 81 points in as many games. He’s great on the power play who also shoots at a high percentage. Zibanejad has also greatly improved in the faceoff dot, helping him become a center that can be trusted in all three zones.

Miller has always been a solid forward in the NHL, but he is coming off a sensational 2021-22 campaign, securing 99 points in 80 games. He’s a great distributor of the puck, as his 67 assists ranked sixth in the NHL last year. Miller’s ability to play both wing and center make him extremely valuable, and it’s a big reason why the Canucks locked him up with an extension this summer.

A lower-body injury kept from seeing another spectacular postseason performance from Point, but he’s built quite a reputation for himself as a playoff phenom. After popping off for 92 points four years ago, he hasn’t produced in the regular season quite the same — he had 58 points in 66 games last year. However, the 26-year-old can be relied upon in all situations, making him a top center in the league.

There always seems to be one or two under-appreciated defensive forwards who eventually get the Selke love they deserve. This past season was Lindholm, who finished second behind Bergeron for the award. The Swede posted a career-high 42 goals and 80 points, centering arguably the best line in hockey last year with Johnny Gaudreau and Matthew Tkachuk. It will be intriguing to see how he adapts without the two, but he’s a strong, under-the-radar No. 1 center.

MORE: Full list of every team’s additions and departures from the offseason

Speaking of excellent and underrated two-way centers, O’Reilly continues to be a sensational player down the middle for the Blues. He’s great in the faceoff dots and in his own zone. O’Reilly has never been to load up the score sheet — his career-high in points is 77 and he’s surpassed 70 points only once in a single season — but he brings everything to the table and is exactly the kind of player you need to win a Stanley Cup (2019, anyone?).

Injuries have forced Eichel to miss a good portion of the last two seasons, but now healthy, he is set for his first full season as a Golden Knight. With his size and finesse, he’s got a ton of offensive skill. Given he is now on a better team with the best linemates he’s had so far, the No. 2 pick from 2015 has a great situation in Vegas to become what many expected of him in Buffalo.

The Devils gambled by giving Hughes a max extension after just two seasons in the NHL, but from everything we’ve seen from the young center, it may end up as a bargain. The No. 1 pick from 2019 had 56 points in 49 games before he was shut down for the season with a knee injury. The 21-year-old has sensational speed and hands, and it is going to quickly work his way up to an elite level in the NHL.

With the Kings going through a recent rebuild, the appreciation for Kopitar seems to have gone down. But the 35-year-old can still get it done in the two-way game, coming off a season where he had 67 points, the most since his career-high 92 in 2017-18. The two-time Selke winner remains a key cog for Los Angeles as the club looks to get back to being a perennial playoff contender.

Pettersson has not quite popped off as people have expected, but the signs and tools are all there for the Swedish forward. After missing most of the 2020-21 season, the young Canuck set a career-high in points with 68 last season. There still is room to grow for Pettersson, who is only 23 years old and hasn’t hit his prime yet.

Injuries have been a big part of Malkin’s regression over the last few years, as he has missed at least 20 games the previous three seasons. However, after missing the first half of the 2021-22 season, the Russian registered 41 points in 42 games. He’s not as dynamic as he once was, but his offensive upside still makes him a strong option at center.

Kadri’s production exploded last season, popping off for 87 points and helping the Avalanche win the Stanley Cup. He finally shook his reputation as a playoff liability and proved he can be a vital piece for a championship team. Now that he’s on the Flames, Kadri will have to prove that he wasn’t just the beneficiary of his surroundings in Colorado and rather that he can be a point-per-game player on a consistent basis.