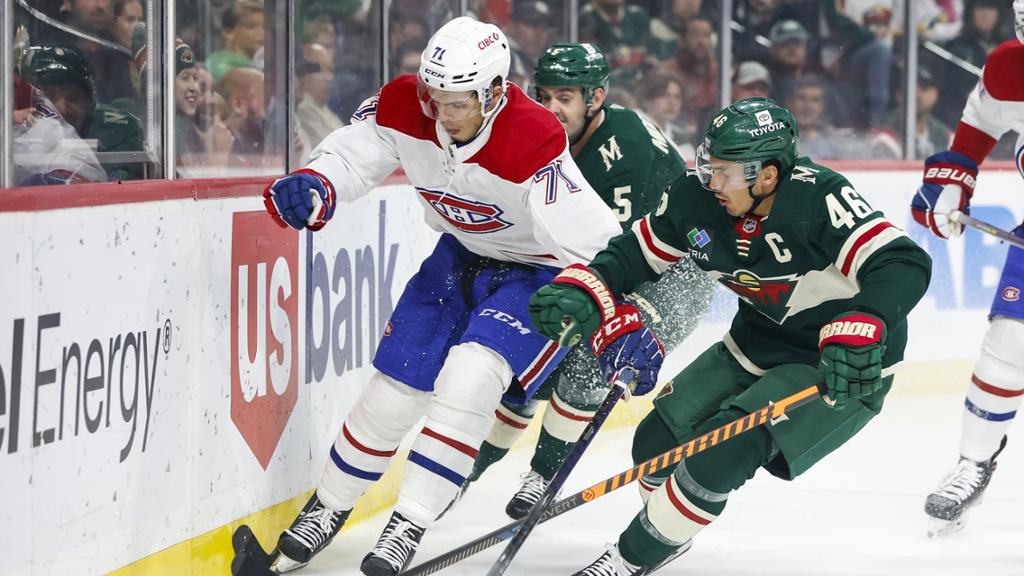 ST. PAUL – The Canadiens suffered the first loss of their four-game road trip, losing 4-1 to the Minnesota Wild at the Xcel Energy Center on Tuesday.

Head coach Martin St-Louis made some lineup changes, re-inserting Jonathan Drouin and Rem Pitlick into the lineup in place of Mike Hoffman and Michael Pezzetta. Pitlick played 20 games for the Wild in 2020-21 before the Habs picked him up off waivers, and also played three seasons for the University of Minnesota.

Jake Allen got the start in goal.

Montreal got off to a strong start, registering seven of the first eight shots of the game. And though the Wild battled back into it in a hard-fought first period, the Habs ended up outshooting Minnesota 15-7 after 20 minutes. Neither team lit the lamp in the opening frame.

The scoreless tie would not last long in the second, however. First, Mason Shaw beat Allen with a one-handed backhander at 1:09 of the period to open the scoring.

Then, with Joel Armia in the box for goaltender interference, Kirill Kaprizov redirected Matt Boldy’s shot from a sharp angle and into the Montreal net just 2:21 later to double the Wild’s lead at 2-0.

Minnesota added a third one with just over five minutes to go in the middle frame when Kaprizov and Marco Rossi drove into the Habs’ zone on a 2-on-1. Although David Savard made a solid diving play to stop the initial pass, the Minnesota skaters recovered the puck and Kaprizov got it past Allen for his second of the night.

The Canadiens challenged the goal, but the call on the ice stood and the Wild went up 3-0.

In the third, the Habs broke Marc-Andre Fleury’s shutout bid with exactly 6:30 remaining in the game and with Montreal on the man advantage, when Nick Suzuki wired it past the Minnesota netminder for his fifth of the season.

Kirby Dach and Chris Wideman picked up assists on the goal.

The Canadiens departed for Winnipeg immediately after the game. They’ll face the Jets on Thursday night in the final contest of their four-game road trip.