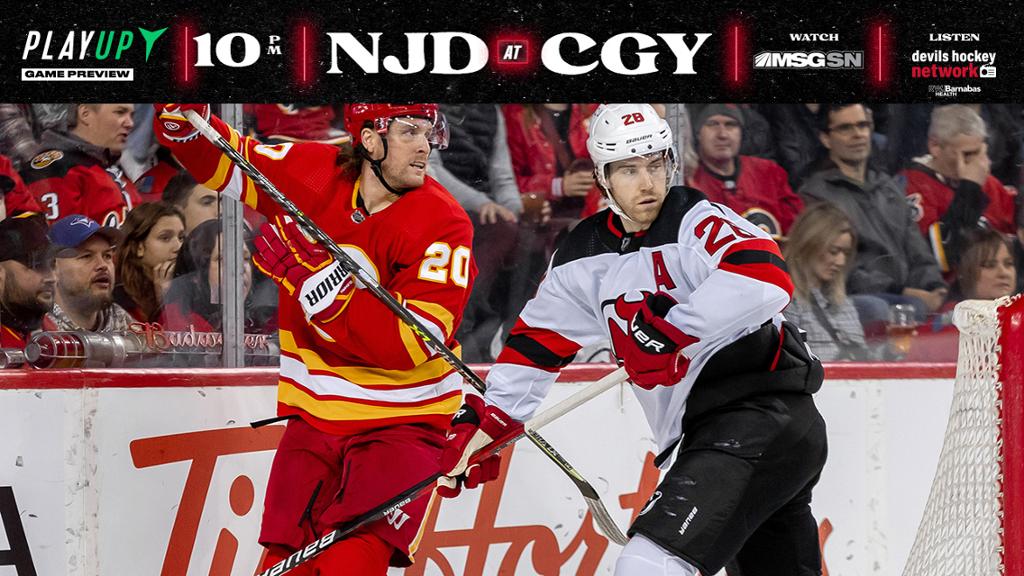 The Devils are in Calgary to take on the Flames at the Scotiabank Saddledome.

Game time is 10 p.m. ET and you can watch on MSGSN or listen on the Devils Hockey Network.

Check below for your pre-game story, interviews, videos, and more.

This is the first of two meetings between the teams this season, with the second in New Jersey on Nov. 8.

The Devils enter Saturday’s game on a five game win streak after two goals in seven seconds lifted New Jersey to a 4-3 victory over the Oilers on Thursday night. Miles Wood contributed two goals in the victory and Ryan Graves scored his second goal in the last three games. Jesper Bratt set a new franchise record for longest points streak to start a season at 11 games. The forward’s five goals, 12 assists, and 17 points through 11 games lead the Devils.

Goaltender Mackenzie Blackwood was injured during Thursday’s game and no update has been provided at this time. Vitek Vanecek came in to relieve Blackwood and stopped 18 of the 19 shots he faced. The off-season acquisition has won his last four games and is averaging a .911 save percentage and 2.06 goals against average.

Calgary is the final stop of a three game road trip where the Devils have gone 2-0-0 so far. When the Devils return home, their first opponent back is the Flames, just three days after the matchup in Calgary.

The Flames are on a three game skid, dropping one-goal games to Edmonton and Seattle before falling 4-1 against the Predators. Before the losing streak, Calgary had won five of its first six games of the year.

It was an impactful off-season as the Flames roster lost superstars like Matthew Tkachuk and Johnny Gaudreau, but added Nazem Kadri, Jonathan Huberdeau and MacKenzie Weegar. Kadri leads the Flames with goals (5) and points (10). Rasmus Andersson leads Calgary with six assists. Jacob Markstrom is the Flames go-to goaltender. With a 4-2-0 record, Markstrom is averaging 2.68 goals against, and has a .903 save percentage.

Saturday is the final game of an eight-game homestand for Calgary before they hit the road for a three-game road trip. The Flames have a back-to-back starting on Long Island before visiting the Devils on Tuesday. Then the team heads up North to Boston to play Thursday.

Nico Hischier and Erik Haula are fifth and sixth in the NHL for face-off wins. Due to their hard work and the overall sucess with face-offs for the forward group, the Devils are third in the league, winning 55.7% of the team’s face-offs.